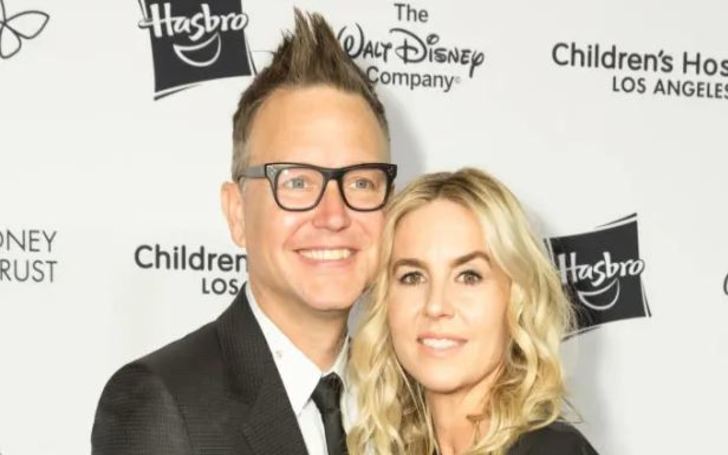 Skye Everly is a celebrity wife of the rock band, Blink 182 bassist and co-vocalist, Mark Hoppus. She has been married to the rockstar for over 20 years.

Hoppus’ band, Blink 182 is considered a key group in the development of pop-punk. They were the most influential punk band of the 1990s, influencing acts such as Fall Out Boy, All Time Low, and the Maine. Blink 182 has sold more than 13 million albums in the United States, and more than 50 million worldwide.

Everly and her spouse albeit a personification of a couple-goal have gone through the test of time with the latter suffering from a major setback regarding his health. See how the pair have managed to keep it strong for two decades and counting. Also, know all about Skye Everly; her life before meeting Hoppus, and much more in the details below.

Skye Everly Is A Californian

Everly (fully, Skye Leigh Everly) was born on August 6, 1972, in Orange County, California. Her father used to be a P.E. Teacher/Volleyball Coach at Utt middle school in the ’90s in Tustin, CA.

Everly is yet to discuss any further details on her family, parents, or her early years.

Every studied at Pepperdine University graduating in 1994. She started out as a TV talent executive for MTV, working there for nearly 10 years. She was an additional crew member at the 1999 MTV Video Music Awards and has worked alongside her husband, Mark in the reality TV series, Trippin (2005).

Ms. Hoppus later shifted to become a designer. This was after giving birth to her child.

And so, Everly started her own clothing line, for babies called, Childish Clothing, which sells kids’ clothes and maternity wear.

The wife of Blink 182 vocalist is also the author of the book Rock Star Momma, which addresses styling and fashion during pregnancy.

She Got Into Clothing Business

Talking to Parents.com, Hoppus’ spouse explained how she came up with the idea of paternity clothing. Everly said she stopped working as an executive because she found it difficult going to clubs to scout for bands while pregnant.

She added how she also couldn’t just sit still. Additionally, she had a problem finding cool clothes that would have looked good on her pregnant body. She thus started designing jeans without stretchy belly bands, so those who were going to become mothers could wear them even after childbirth.

In the initial days, she used her husband’s tour bus as her office. Everly’s brand has been worn by celebs including Gwyneth Paltrow, Courteney Cox, Reese Witherspoon, and Debra Messing.

Skye Everly Initially Said No To Her Now-Husband

Skye Everly married her bassist and vocalist husband, Mark Hoppus on December 2, 2000. The couple met through Hoppus’ former bandmate, Tom DeLonge. They stumbled upon each other during a rehearsal for the video of All The Small Things. Everly then was still working at MTV.

They allegedly had their wedding in Hawaii.

While talking with Believer magazine in 2004, Everly’s husband revealed how DeLonge used to ask other girls to date him.

“Tom always used to embarrass me. Any girl he’d talk to, he’d say, ‘Hey, you wanna go on a date with Mark?’

said the 49-year-old singer husband of Skye Everly. Among such girls who DeLonge approached for his friend was Everly. She, too, initially had said no to Hoppus. “He asked Skye, my wife, who looked at me and said ‘No.’ That’s how it all started,” remembered the Californian artist.

Skye Everly Has A Son With Her Husband, Mark Hoppus

Everly and Hoppus are parents to their son, Jack who was born on August 5th, 2002. In 2011, the Hoppus family relocated to Mayfair, London, as blink-182 was working on their sixth album, Neighborhoods.

Skye, her husband, and their son lived there for three years before moving to Beverly Hills, California, in 2014. Their son is studying at The University of Chicago.

Her family has a ritual of going out to breakfast every morning at a local cafe — even on school days.

Skyler And Hoppus Married Once Again

After a decade of their marriage, Everly and Hoppus renewed their vows at the beautiful Babington House in Somerset, England.

The bride wore a simple yet elegant white Valentino dress with nude Louboutin’s and Hunter wellington boots. Babington House has hosted weddings of some of the big couples including Nick Jonas, Eddie Redmayne, James Corden, and Professor Green.

In June 2021, Everly’s husband revealed he was suffering from cancer, stage four diffuse large B-cell lymphoma. The original diagnosis had emerged in April.

Hoppus posted on both of his Instagram and Twitter handles. The rockstar husband of Skye also thanked God, the universe, friends, and family who sent their support and love.

How Rich Is Skye Everly’s Husband?

Everly’s longtime partner, Mark Hoppus has garnered quite a career earnings being a musician. Allegedly his net worth is upward of $80million.

Additionally, he also used to own two companies named Atticus Clothing, and Macbeth Footwear; the sellout of which reportedly has a significant boost on his fortune. What’s more, he still is the CEO and founder of his own clothing line, Hi My Name is Mark (HMNIM).

In October 2016, Hoppus’ rockstar-sized Beverly Hills house had a listing price worth $10 million.

Some Interesting Facts About Skye Everly