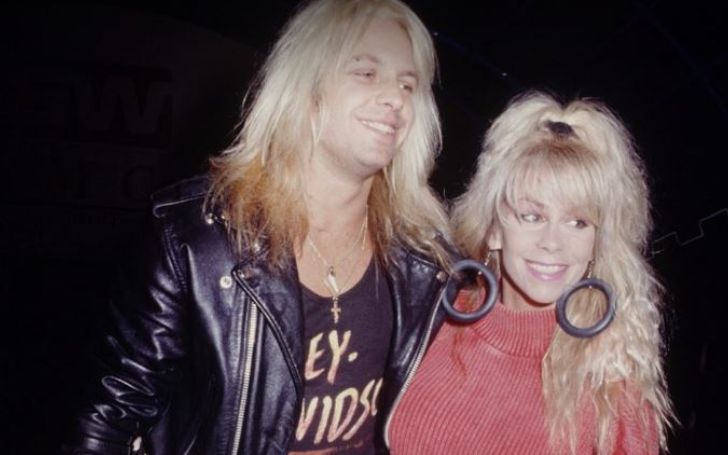 Sharise Ruddell is a former mud wrestler and model turned reality star and fashion designer. She was also the leading lady in the TV show, Ex-Wives Of Rock. She has also had appearances in VH1 Where Are They Now? and E! True Hollywood Story.

More often than not Ruddell however is famous as the ex-wife of the heavy metal band Mötley Crüe lead singer, Vince Neil. Sharise was Neil’s wife for six years. Despite being the former wife of one of the most iconic heavy metal artists, not a great deal about Sharise has been discussed. She nevertheless does have stories to tell be it from the time she was with Vince Neil or with respect to what happened in the years since she divorced the Theater Of Pain singer.

Keep scrolling to learn what is she doing now, what was her relationship like with Neil, why did they break up, and who is Ruddell dating now among other queries.

Sharise Ruddell Was Born In The Mid-60s

Rudell was born on Oct 27, 1964, in Huntington Beach California. She is the daughter of Gary and Shirley Ruddell. Sharise is one of the four children of her parents. Her siblings are Gary Lee Ruddell, Greg Ruddell, and Shanae Ruddell.

What Does The Name Sharise Mean?

Although the now 58 years old Ruddell is yet to explain how her name came to be Sharise or the meaning behind it, theories include the moniker comes from the Anglo-French “Cherise” which in turn means “cherry a deep, bright red color tinted with pink.” In Greek, the name refers to grace and kindness.

What Is Her Age?

She is 58 years old at present.

Sharise and Neil were married from 1987 to 1993. Ruddell first met the heavy metal artist while attending one of his house parties. Sharise married the rockstar, Neil on April 30, 1987.

When asked what she liked the most about Vince Neil, Sharise said

For their first date, Ruddell and Neil went to L’Orangerie, a really fancy restaurant in Beverly Hills.

Sharise in an interview revealed she had known before their wedding that her and Neil’s relationship wasn’t going to work out. She said as their relationship was developing, Vince became more alcoholic and her response to that was

Ruddell revealed the main problem was how her ex-husband Vince handled conflicts. She said Neil wasn’t very good at resolving problems and that he would throw and break things in front of her. According to Sharise, Vince, at one point, broke a glass table right in front of her. Sharise told that she could have gotten some pieces in her eyes. It was after that that Sharise told Vince, “I’m not putting up with this.” The two were in Canada when they broke up. Also in one of the episodes of Ex-Wives Of Rock season 1, Sharise revealed that Vince was unfaithful to her.

Ruddell and Neil finalized their divorce in 1993. Once during a q and a, Sharise revealed the ballpark figure of her divorce settlement from the Shout At The Devil singer was less than $100,000.

Sharise Lost A Daughter Skylar With Her Ex-Husband

Sharise, age 58, had a daughter, Skylar Lynnae Neil with her ex-husband Neil who however died at age four. Ruddell’s little girl who was born on March 26, 1991, lost her life on Aug 15, 1995, after battling four months of cancer. Doctors initially thought Skylar had burst her appendix but later it turned out to be Wilms’ tumor, a cancerous tumor around her both kidneys.

Ruddell and Vince’s only daughter, Skylar in total went through six operations, and extensive chemotherapy and radiation. None of the surgeries, however, was able to save the life of Skylar and she died on August 15, 1995. Her parents buried her in Forest Lawn, Los Angeles, California.

Once while talking about the loss of her daughter Skylar, Sharise told Chatelaine that she ‘wore a hole in her sheets by just staying in her bed.’ She explained it was spending time with friends and letting time go that healed her heart the most. Ruddell however said that one can never get over such a loss.

Sharise Ruddell Has A Son From One Of Her Past Marriages

After ending her marriage with Neil, Sharise began a relationship with Kirk Seigel, a fellow designer. The couple later also became parents to Colt Seigel on Nov 3, 2002. Kirk and Ruddell however separated in 2006. Sharise’s son, Colt is an aspiring DJ.

After Seigel, Ruddell reportedly went on to have relationships with a few other men but she mostly kept those stories private. As for the present, it has been said that the ex-reality star is dating a guy named Steve Kinninger.

The two apparently started their relationship sometime in 2016. However, some sources suggest the duo might have already broken up.

On the other hand, Ruddell’s ex-husband Vince is currently dating Rain Hannah. In the past, he has had several partners and from three of them, he became a father to three kids including Skylar. Neil’s now surviving kids are Elizabeth Ashley Wharton and Neil Jason Wharton. Elizabeth is the daughter between Vince and his ex-wife, Beth Lynn.

Sharise Other Relationship; Past And Present; She Allegedly Dated 2Pac Shakur

Besides the aforesaid men, rumor has it, Sharise also dated some famous celebrities. One of the biggest names is that of the late All Eyez On Me singer 2Pac Shakur. While it is yet to be known if this fling ever happened, Sharise did have some close connection to Shakur. She once had the ownership of the Changes singer’s California Love Hat. It was the same headgear that Shakur wore during the shooting of his California Love music video. Sharise in an interview revealed that when Shakur gave her the hat, he had signed it and had written his number on it. The headpiece later went off in an auction.

Sharise was also under suspicion for being in a relationship with the lead singer of Faster Pussycat, Taime Downe, American actor, Judd Nelson, and Kelly Nickels among others.

Also when Sharise was one of the casts of Ex-Wives Of Rock, she used to date, Brandon. The relationship was also one of the show’s storylines.

Sharise Ruddell Career; She Used To Be A Mud Wrestler

Sharise was a mud wrestler at the Hollywood Tropicana club before she started dating the Shout At The Devil singer Vince Neil. Later she became a model and also starred in Motley Crue’s music video, Girls Girls Girls.

Some time afterward, Sharise dived into fashion design. As a designer, she has provided her imagination to making stage jackets, and original pieces for fashionable and high-class boutiques on Sunset Boulevard, Hollywood. The blonde woman from California also used to design some of Vince’s clothes.

Sharise additionally used to own a company called NA-NA though the business ran only for a short period. It nevertheless produced hit designs Pink Polka Dot Kandy and Wrappers bikinis.

Sharise took some time off right after the death of her daughter, Skylar.

Ruddell, 58, now is the owner of Home Sweet Home Remodel and Design, which started in 2017. She additionally is a casting producer at Renegade83 LLC.

Is Sharise As Rich As Her Ex-Husband Vince Neil? Their Net Worth

Although Ruddell does have her share of popularity as an entrepreneur, fashion designer, & reality star, it seems improbable that all the roles have brought her wealth equivalent to her multimillionaire former husband, Neil who has an estimated net worth of over $50 million.

Besides Neil’s fame easily surpasses the minimal popularity of his ex-wife Ruddell and hence the difference in their net worth. Nevertheless, since Ruddell is also a businesswoman with quite a reach, it might just as well be the case that she is also a millionaire on her own.