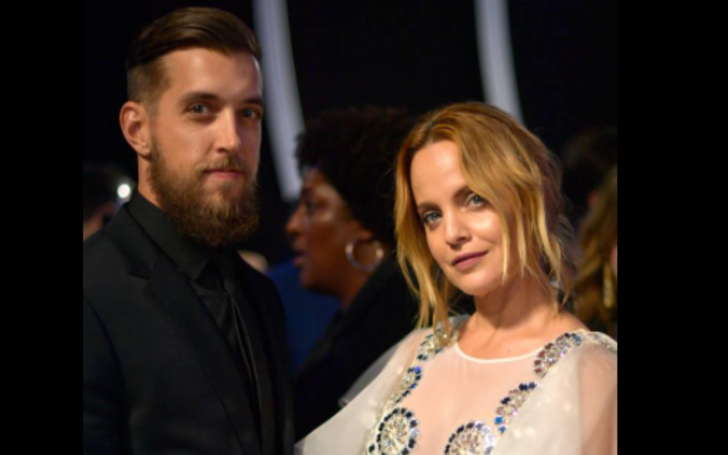 Michael Hope is the husband of actress Mena Suvari. Hope’s wife, Suvari is known for her performances in films like American Pie, American Beauty, Slums of Beverly Hills, Loser, Sugar & Spice, Rumor Has It, Stuck, and You May Not Kiss the Bride.

It is unclear if Suvari is Michael’s first wife; he, on the other hand, is definitely not the first one for whom she walked down the aisle. Nonetheless, Hope became the first guy with whom she started a family and is seemingly happy like never before.

So, how did Hope manage to woo this 2000s Hollywood crush? Where was he before dating Mena Suvari? And who exactly is he? In this article, we will talk everything about the personal and professional life of Mena Suvari’s husband Michael Hope.

Michael Hope Was A Footballer

Hope was born in Canada. Although his birth year is yet to be disclosed, he celebrates his birthday on the 16th of June. His father, Christopher passed away when he was very young. Suvari’s husband, Hope is a set decorator and prop master who works in the film and television industry. He was a decorator for Two Lovers And A Bear, 2016. Hope is presumably a graduate of Sault College, Toronto, Canada.

Over the years the American Pie actresses’ spouse has worked on many projects including series like Flower Shop Mysteries, Slasher, Cardinal, The Umbrella Academy, Remember, and Killjoys. He has also served as assistant property master for films like Indian Horse, Love Of My Life, For Love And Honor, A Perfect Christmas, and so on.

Hope used to be a footballer during the early 2010s. It is not known when and why he quit or if he even tried to make it to the big league. He, however, was a defensive back for Sault Steelers of the Northern Conference League. Mike has often posted throwbacks of his days being a Steelers’ player. Suvari’s husband used to sport the number 24.

Hope married his spouse Suvari on March 27, 2018. As per sources, it was a “very intimate and beautiful” ceremony. After the wedding, Mena told to US Weekly that she had her closest friends with her at the wedding.

She explained the event was very meaningful and that it was very nice just getting settled, especially in the 40s. Mena first showed her wedding ring on the red carpet as she attended the Last Chance for Animals Annual Celebrity Benefit held in Beverly Hills on 20 October 2018.

The pair met back in 2016 on the set of Hallmark’s I’ll Be Home For Christmas, where the Screen Actors Guild winner was acting and he was the set decorator of the film.

The property master, Michael Hope has been supportive of his wife throughout their marriage. In one of his Instagram posts, Suvari’s husband penned a heartwarming tribute to his Hollywood wife. Hope wrote that he knew from the beginning his relationship with the actress was going to be something special. He mentioned the spark, the connection, and the love he felt with his future wife.

“I will always love you with every ounce of my being. Thank you for everything you do for us, me, and yourself each and every day.”

Likewise, his wife told People that he was the first person she saw herself having a family with.

Michael Hope Is A Father Of a Son: Struggled Conceiving A Child Of Their Own

While talking with People in October 2020, Michael Hope’s wife Suvari said she’s had to change her eating and sleeping habits whilst trying to have a baby.

The couple started trying for a baby in early 2020, yet, the good news still surprised the actress. That was because of all of the months she took tests that came up negative.

The Six Feet Under cast stated she was recording her temperature every morning and peeing on ovulation sticks. After finishing her memoir, Hope and Suvari found out that they were pregnant with their first child.

Sharing a photo on Instagram of her baby bump, Mrs. Michael Hope wrote,

“Through all the trauma, through all the struggle, through all the doubt, our little angel has chosen us. I will never have enough words to describe my love for this beautiful soul coming into our lives, but I won’t ever stop trying to give him the best life possible.”

She learned of her pregnancy while shooting a project in Georgia in July 2020. The couple welcomed their son, Christopher in April 2021. They decided to name him after Hope’s late father.

On July 21, 2021, Hope’s wife of three years announced the release of her memoir, The Great Peace: A Memoir, which narrates the sexual abuse and drug addiction she went through prior to her success.

With People, Suvari revealed how she was living a double life. She explained she would act differently every time she was interviewed.

In the book, she also talks about being sexually assaulted first back in sixth grade by a friend of her older brother. She refers to her perpetrator as KJ in the memoir. The now 42-year-old actress said part of her died that day.

She remembered the way in which the abuser used her, had fun with her, and then disposed of her. He called her a whore. The Rhode Island-born star added that she never got to have a healthy expression of [sex]. Her choice was lost.

Suvari also revealed an incident where a manager wanted a sexual relationship with her. She was 15 and had just moved to Hollywood.  She added by then her family had pretty much fallen apart. Her mother had moved out and wanted to find herself and her father was in decline mentally and physically.

The Bafta nominee said she didn’t feel like she had any other options or was worthy of a life that was any different.

Most recently, the actress recalled a “weird” experience while shooting American Beauty with Kevin Spacey. That was prior to his sexual assault scandal.

Suvari’s husband, Hope seems to be a huge fanatic of vintage cars and bikes. However, it is unsure if the pieces he has showcased throughout his Instagram are actually his. The Canadian former footballer, nonetheless, appears to know a lot about classic models.

Some antique four-wheelers, he has talked about on his Insta, include Ford Falcon, Cadillac, Volvo, Ford Fairlane, Dodge Dart, Honda, Volkswagon, BMW, Chrysler, among others.

How Much Is Michael Hope’s Net Worth?

Well, like any celebrity Hope is pretty much well-to-do. He has been living a beautiful life and enjoying all the luxuries one can have. Talking of his wealth, he is estimated to have a net worth of over $1.5 million as of 2022.