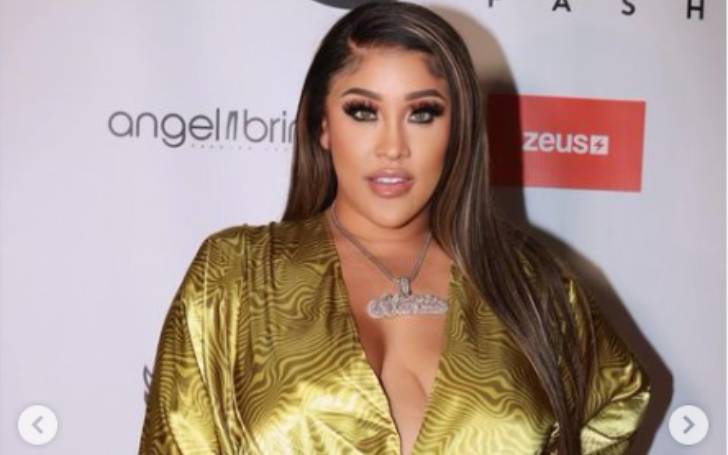 Natalie Nunn is an American reality TV personality who shot to fame after her appearance on the fourth season of Bad Girls Club. She is also part of numerous shows such as Love Games: Bad Girls Need, Bridezillas, Celebrity Big Brother, Baddies, and many more. Besides, she is also an entrepreneur, author, and mother of a beautiful daughter.

The TV star is more popular for her violent and angry behavior in shows making her recognized as a “Bad Girl.” Since the show, she is carrying this name behind her and is happily flaunting it. On the other hand, she has tied knots with Jacob Payne and has come a long way with him. However, there were some bumps on the road of the couple’s life in the marital journey.

Meanwhile, the news of the wife accused of cheating on her husband is also not hidden from the public. So did Natalie really cheat on her husband? Did the husband-wife then break up? Is the Bad Girl in reel life, actually a bad girl in real life too? Read the piece below to find out the inside-out of the Baddies star Natalie Nunn’s life. We will also discover about her parents, siblings, and some other interesting facts!

The media personality was born Natalie Tynika Nunn on December 26, 1984. She opened her eyes to her parents Karen and Earl Nunn in Concord, California, US. She is an American native and belongs to a Caucasian ethnic background.

Even though she was born in Concord, she later moved to another city in Pleasanton with her mother. Natalie spent most of her childhood there alongside her brother, Ronald Nunn. Her mother used to do two jobs there to raise her and her sibling. However, there is no information about what the job was as well as her father’s profession.

What Is Her Age?

Growing up, Nunn was always interested in sports. She went to Aragon High School for schooling in San Mateo and actively participated in ECAs. She even earned the most valuable player honors there in her senior session. Moreover, the reality star ran on the track team and competed in the Junior Olympics in 2002.

After completing high school, she attended the University of Southern California. She was there on a full soccer scholarship and was actually a part of the Trojans’ women’s soccer team. Not only that, but she also played soccer for the De Anza Force, which won the 2003 state championship.

Natalie Nunn Had Love At First Sight With Her Husband

Nunn is currently married to her husband Jacob Payne; a professional American football player. The couple first met in 2011 at a club in Detroit while she was making an appearance regarding her show. In the meantime, her boyfriend turned husband was already there with his friends and the promoter of the club.

When the Bad Girl then saw the footballer, she instantly fell for him. Well, the fire was not just one-sided, even Payne felt the heat and was attracted to her. The pair soon were in a relationship despite living in different cities.

But looks like he couldn’t stay away from her for a long time. That’s why her then-boyfriend Jacob went to Los Angeles after a couple of months of dating each other to visit her. Nevertheless, he never left and stayed with her forever.

The 38-years-old in an interview said;

“He was so charming and handsome, I fell in love at first sight. He then came to LA to visit me and never went back.”

Following the pair’s love relationship for eight months, Jacob finally dropped down on his knees and proposed to his girl for marriage. Nunn and Payne were then on a vacation to the island of Jamaica in Negril. The pair decided to walk down the aisle on 5th May 2012.

Though the TV star and her spouse hitched in a classy private party at a friend’s mansion in Topanga Canyon, California, it was later aired on TV. The function included about 50 to 60 guests who were their family members and friends.

Later, when she was blamed for faking her wedding, she broadcasted her wedding video on three episodes of We TV’s “Bridezillas.” The reason she said for doing so, was to share her experience with her fans than prove it to anyone.

Did Natalie Nunn Have a Baby? She Suffered a Miscarriage

Yes, Natalie has a beautiful daughter, Journey Ruth Payne, with her husband. She announced having a baby girl on November 22, 2016, via her Instagram, when she was already 5 months pregnant. Eventually, she gave birth to a healthy child on April 16, 2017.  However, it wasn’t easy for her.

Before conceiving this baby, she had an announcement of being pregnant in November 2014. However, as she was having a normal life and there was no further update about her pregnancy, people thought it was just for the sake of media attention.

Meanwhile, the mother of one spoke about her miscarriage in an interview with Oxygen clearing the rumors. In fact, she even suffered from depression and weight gain. She wanted to keep it private as it was a heartbreaking experience that she didn’t want to share.

Her Crumbling Marital Relationship: Did She Cheat Jacob Payne?

Well, like every matrimony goes through ups and downs, Natalie’s case is no different. In 2019, the couple’s marriage hit a rock when the news of Bad Girl cheating on her husband was all over the media.

Upon hearing about the incident, Jacob said he will break up with her until he figures out the truth. He was then seen leaving the house on December 6, 2019, with his stuff. Consequently, he was witnessed in London alone without his wedding ring.

However, later that week the couple were again glimpsed together in the streets of London. Maybe they had sorted things out and were back again.

Natalie Nunn Went to Marriage Boot Camp With Her Spouse; Bad Girl Said She Can Never Be a Good Girl

The reality show star is trying her best to save her wedlock which is why she went to the Marriage Boot Camp with her husband to fix things between them. She is not ready to give up the years-long relationship yet.

Nunn in an interview revealed that her husband doesn’t like it when she does bad girl stuff like twerking on the bed or being half naked on Instagram. So, she is trying to control herself to some extent trying not to do such things.

However, she also mentioned that she cannot be a completely good girl. Even though she is trying to decrease her badness by some percentage from being 100% bad to 80 to 90%,  she will always be a bit of a bad girl.

On the good side, her attempt of trying to be good has somehow helped her to save her marriage. While she used to have an everyday fight over these things, they have a fight once a week these days. After the camp, the husband-wife relationship is good now. They are traveling and are having fun with the family.

As we said, Natalie is an American personality who is prevalent for being part of TV shows. She first came to notice after her appearance on season 4 of Bad Girls Club because of her violence and anger. Following her popularity in that show, she got an opportunity to be a part of other shows such as Love Games: Bad Girls Need, Bridezillas, Celebrity Big Brother, Baddies, and many more.

She was likewise in the reality shows like Marriage Boot Camp which gained her more attention from the public. Furthermore, she is now working as an executive producer of Baddies and Bad Boys on Zeus.

Unlike many celebrities, Natalie knows how to use her fame very well. So she started her own business side by side, establishing herself as an entrepreneur. She has a lash and cosmetics business of her own as well as a fitness brand.

The TV star is more talented than people really think she is. In addition to being a businesswoman and a media personality, she is an author too. She has published three books; Straight Like That, Turn Down For What, and From Bad Girl to Grown Woman.

Did Natalie Get Kicked Off BGC?

She was in season 4 of Bad Girls Club but was removed from the show in the 11th episode. It was because of her violent behavior as she had a physical fight with her fellow contestants Kendra, Lexie, and Amber. Regardless, she was again invited in season 5 because of her popularity.

What Is Natalie Nunn’s Net Worth?

Many of you might be wondering if the entrepreneur is making millions from her profession. Well, despite her immense popularity her total earnings are not quite to the mark. Natalie has a decent net worth of $325,000 to $500,000 through her business and TV shows.

However, her wealth is expected to increase in the future, credit goes to her business ventures and her acting career.

Baddies’ star is not only popular on TV shows but also on social media platforms. She has an Instagram account by the name Natalie Nunn with 1.3 million followers and 255 posts.

The stunning model has made good use of her fame and social media by promoting her business on it. She has a page of her cosmetic brand @natalienunncosmetics with 35.5K followers. Similarly, she has a page for fitness by the name Paynes Fitness with 14.1K followers and a page for hair products under her daughter’s name; Journey “Hair” Payne with 6378 followers in it.

Does Natalie Nunn Have an Onlyfans?

Yes, the sensational media star has an account on Onlyfans by the name miss Natalie Nunn. She has 15.5K likes on it with 314 posts, however, she is not active here these days. She last used this platform on June 22, 2022.

Other Facts About Natalie Nunn