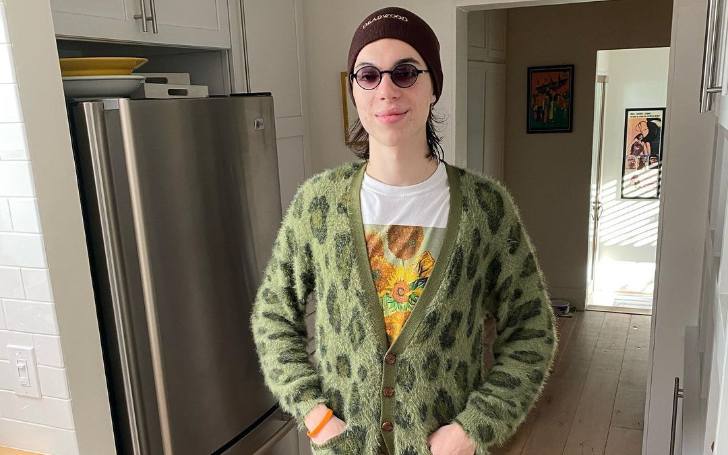 Quinn Welliver is recognized as the son of the American actor Titus Welliver. His father Titus is famously known for his lead role in the television series Bosch and Bosh: Legacy. Further, Titus is also famous for the Lost, Deadwood, and Sons of Anarchy.

Likewise, Quinn’s mother Joanna Heimbold also works as an actress in the American Entertainment Industry. Being the son of actors, Welliver also appeared on the screen at a small age of 12 years. He played the young version of the lead character Harry Bosch in the 2014 TV series, Bosch. If then, is Titus Welliver’s son also in the Bosch spin-off series Bosch: Legacy?

Today, read this piece of article to know everything about Titus Welliver’s son Quinn including his age, early life, siblings, career, and much more. Here we go.

How Old Is Quinn Welliver? His Early Life And Parents

When Welliver was just a two-year-old kid, his parents separated. So, he grew up with his father and his other family in his hometown. As said earlier, his parents are Titus Welliver and Joanna Heimbold.

Besides, with regard to ethnicity, he belongs to a mixed race as his father has ancestry in German, English, Scottish, Irish, and Welsh while his mom is Caucasian. Further, Quinn holds American nationality.

Moving back to generations, Quinn’s grandparents were also successful personalities just like his parents. His paternal grandfather Neil Welliver was a famous American landscape painter. He was also a professor of fine art at Yale University and later, he served in the Dean position at the University of Pennsylvania’s Graduate School of Fine Art. Similarly, his paternal grandmother Norma Cripps was a fashion Illustrator.

In the same way, Welliver’s grandfather Charles A. Hemboid from his mother’s side served as the president of a pharmaceutical manufacturer company, Bristol-Myers Squibb Company. His maternal grandmom Monika A. Heimbold was a social worker.

The 20-year-old celebrity son is a brother to his two siblings named Eamonn Lorcan Charles and Cora Welliver.

Eamonn, born in May 1999 is Quinn’s elder brother from the same mother. Currently, Lorcan is 23 years old. Moving further, Cora is Welliver’s half-sister, born in 2006 from his father’s marriage with Elizabeth W. Alexander.

Welliver’s dad Titus is an accomplished Hollywood actor. The now 60 years old Bosch famed actor married five times in his life. For the first time, he tied the knot with his wife named Heather Wielandt whose information is not available in the media.

After Titus separated from Heather, he walked down the aisle with his second wife Dani  Sexton, a Hollywood talent agent. Just like his first marriage, his marriage with Dani also didn’t last long and ended with a divorce after 4 years of marriage in 1996. Again, the Deadwood actor settled down with actress Joanna Heimbold in 1998. The two together welcomed two sons and eventually ended their marriage in 2004.

Then, Welliver’s daddy Titus married his fourth wife, a film producer Elizabeth W. Alexander in 2005. The two separated with the death of Alexander in 2012. She died of breast cancer. Later after two years, The Town actor shared the vows with his fifth wife Jose Stemkens, a Dutch fashion consultant. The two remained married for 5 years and in 2019, he filed for a divorce from Stemkens finalizing it in 2021.

Currently Engaged to his Future-Wife

Quinn’s father is now engaged to his new love Samanta Edge. On the other hand, Quinn’s mom Joanna also exchanged vows with actor Richard Cox after she separated from Titus. Joanna and Richard also are no longer together as of today.

Quinn Welliver Appeared In His Father’s Lead Series Bosch; What His Dad Told On It?

Apart from his identity as a celeb child, Quinn is also known for his portrayal of young Harry Bosch in the Amazon drama, Bosch. As we all know, Harry Bosch is the character played by his father Titus Welliver. Though Quinn appeared in a small flashback part, he succeeded in justifying the character at such a young age of 12.

Meanwhile, his famous dad Titus was surprised to see his 12 years old son being so good at acting. Regarding this, he said in an interview,

He (Quinn) has this tremendous gift to be able to tap into who that character is and he really brought that emotional weight that that character carries.

He further talked about the series flashback scene and told,

So when we can go back and see young Harry, it informs that which we see him as an older man and it’s connective tissue, for the audience is great, and I was extremely proud of how he did that.

Is Titus Welliver’s Son, Quinn In The Bosch: Legacy Too?

Titus’ younger son Quinn is not in Bosch: Legacy, the eighth season of the 2014 series Bosch. Once he showed up as a child actor in Bosch but after that, he never again appeared in any movies or series.

Not Quinn, but yes Quinn’s older brother Eamonn can be seen in the Bosch: Legacy. He played a younger Bosch in the 8th episode titled “Bloodlines“.

Despite being the celeb kid, Quinn has adopted a secretive lifestyle. He very rarely shows his presence in the media and in addition, Welliver is also not active on any of the social media handles. Because of this, it’s really difficult to trace his love life.

As he is a private person, he may be protecting his personal life from media exposure. If by chance he is dating, he is preferring to keep it secret as we cannot deny the possibility for a 20-year-old boy to be in a relationship. But still, until and unless he himself doesn’t come forward to talk about his relationship status, it’s safe to say he is single.

What Is Quinn Doing Today?

As said earlier, he is incredibly private about his personal life. So, with certainty, nothing can be told but counting on his age, we believe that Quinn is studying at a university. Further, looking at his father’s shared picture of him, it seems like, besides his studies, Quinn is also working on skill development.

On February 7, his dad shared a picture in which he is pointing out a gun. Seeing the photo, it looks like, Quin loves shooting.

Quinn once appeared as an actor, but he didn’t continue his acting career. Further, he doesn’t seem to be involved in any other fields professionally. So, it is obvious that his net worth is yet to be estimated.

On the other hand, his famous actor father Titus Welliver has a fortune of $4 million as of 2023.

Aanisah Hinds, Macy Gray’ Daughter; What is she doing?