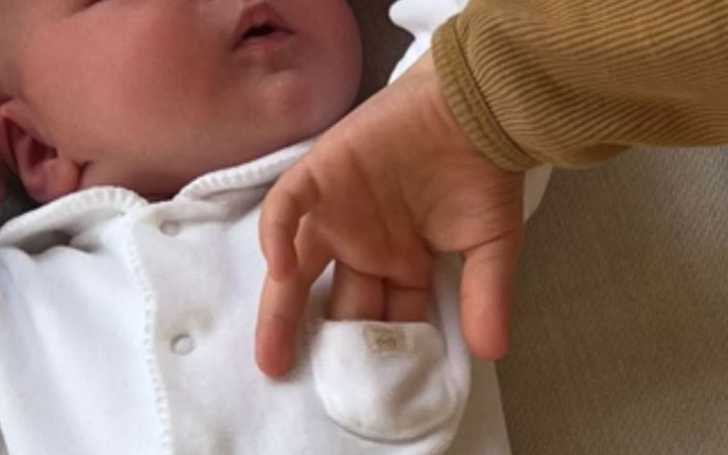 Isabella James Statham is an adorable newborn daughter of Rosie Huntington-Whiteley and her fiance, Jason Statham. Both of her parents are notable figures in the entertainment industry.

Isabella’s mom, Rosie is an English model who is popular for her work for lingerie retailer Victoria’s Secret. Also, her mother is an actress recognized for playing the supporting role of Carly Spencer in Michael Bay’s film Transformers: Dark of the Moon. On the other hand, Isabella’s father, Jason Statham is an English actor hugely famous for his roles in action-thriller movies like the Transporter trilogy (2002-2008), Snatch, and Lock, Stock and Two Smoking Barrels.

Today, in the article below, we will uncover every small available fact regarding Rosie Huntington-Whiteley’s youngest child, Isabella James Statham. So without any fuss, let’s dig into the life of the celebrity daughter.

How Old Is Isabella James Statham In 2022? Her Family Details

The star kid Isabella James Statham was born on the 2nd of February 2022 in England. As of 2022, her age is 8 months and will celebrate her 1st birthday in Feb of the coming year.

Prior to Isabella James’ birth, Rosie disclosed her pregnancy in August 2020. She shared a series of mirror selfies showing off different outfits and her baby bump with a caption saying, “Taaa daahhh !! #round2.”

Statham Has An Elder Sibling

As mentioned above, Isabella James is the youngest child of her parents. She has an elder sibling named, Jack Oscar Statham. Her big brother was born on June 24, 2017, in England. At the time of his birth, he weighed 8.8 lbs.

Needless to mention, the brother-sister duo is close to each other. Both of them are more like friends and a companion to one another to play with.

The youngest of Statham’s parents, Rosie Huntington-Whiteley and Jason Statham are engaged for over 6 years. The couple made their engagement news public during the 2016 Golden Globes.

Though they are yet to get married, the two have been with each other in every up and down for almost over a decade. Talking about the marriage, Isabella’s mother revealed neither she nor her fiance prioritize a happy relationship rather than their wedding.

In an interview, while talking about the marriage, Huntington-Whiteley said:

“For any couple that’s been together for a certain amount of time, there’s a massive amount of pressure to get married.”

“I totally believe in marriage, but being in a happy relationship is much more important to me … [Kids are] something that’s more realistic in the near future.”

Her Father and Mother’s First Met at a Party

As said above, Isabella’s parents are engaged for over 6 years and are together for over a decade. Talking about their very first encounter, the couple met at a party in London back in 2009.

They first developed a friendly bond and eventually started dating. For around a couple of years, they were successful in keeping their relationship secret from the media and the public.

After making their affair official, they faced many bashes because of their age difference but it never bothered the couple. In fact, Isabella James Statham’s mother Huntington-Whiteley said it is the best-ever relationship the model has been in so far.

Isabella’s dad, Jason Statham is an English actor who turned professional in the early 90s. Prior to entering in acting world, he practiced Chinese martial arts, kickboxing, and karate working at local market stalls.

He then landed in modeling and worked for French Connection, Tommy Hilfiger, and Levi’s in various ad campaigns. Meanwhile, he was discovered by the director Guy Ritchie and cast in Lock, Stock and Two Smoking Barrels (salary £5,000 (UK)) after learning about his past as a black market salesman.

Since then, the actor has been popular for his tough, gritty, or violent roles in various action-thrillers films. His few notable acting credits include Snatch, The Transporter, The Italian Job, Spy, Furious 7, Fast and Furious 6, and Fast & Furious Presents: Hobbs & Shaw.

Statham’s mom Rosie Huntington-Whiteley is one of the highest-paid models in the industry. When she was 15, she undertook work experience at London West End-based model agency Profile.

She first appeared in Levi’s jeans commercial and eventually made her breakthrough while traveling to NYC for a shoot with Teen Vogue in January 2004. So far, Rosie has associated with brands and designers like Louis Vuitton, Ferretti, Burberry, Sportmax, Clinique, Dolce & Gabbana, Prada, Victoria’s Secret, and Michael Kors.

Moving toward her acting career, the model made a debut playing the supporting role of Carly Spencer in the film Transformers: Dark of Moon replacing Megan Fox. She shared her screen with stars like John Turturro, Josh Duhamel, and Tyrese Gibson. Afterward, she appeared in Mad Max: Fury Road and About Face.

Both of Isabella James Statham’s Parents Are Super Rich

Isabella comes from a wealthy family background. Both of her parents are popular faces in the showbiz industry. Therefore, it is very obvious that she is being raised with comfort and luxury.

It is pretty sure that being the daughter of two big names in Hollywood comes with various favorable positions, especially monetary ones. The 8-month-old now may not know but she is living a life every people dream of having someday.

Talking about Statham’s parents’ wealth, the duo owns a combined fortune of $120 million as of 2022. Her model-actress mother Rosie Huntington-Whiteley has an estimated net worth of $30 million. On the other hand, her father Jason Statham is worth $90 million.

At present, Isabella resides in Beverly Hills, California with her mom and dad.