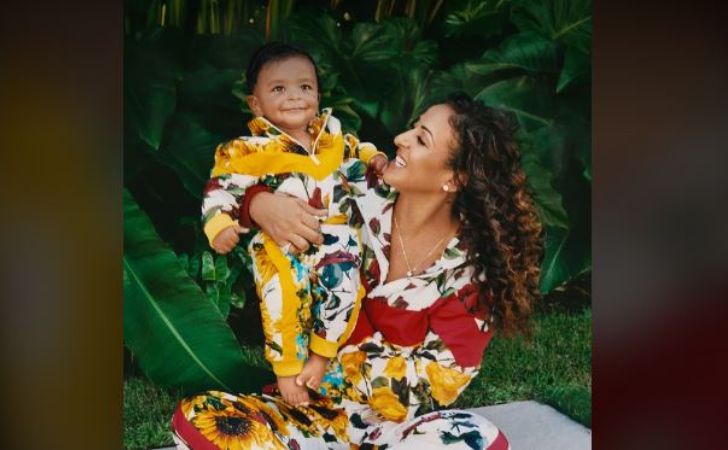 Aalam Khaled is the son of DJ Khaled, the DJ, record executive, author, and record producer. The I’m The One singer Khaled had his second son, Aalam with his longtime partner and wife, Nicole Tuck in early 2020.

Aalam also has an elder brother, Asahd, and together the brothers are possibly among the luckiest kids around. One can definitely say Khaled doesn’t seem to get enough of basking in the fatherhood through Aalam and his brother, Asahd Tuck Khaled. Aalam not only does have a loving father and mother but as it comes across, he is also a celebrity on his own.

And it is all thanks to his musician father who has been keeping him close to cameras since his birth. The No Brainer singer seemingly has been trying to make his sons junior hip-hop moguls. Not even in his toddler years and Aalam Tuck Khaled already has tens of thousands of followers on Instagram. Take a look at pointers that have made Aalam no less than a big name in itself.

Aalam Khaled was born on January 20, 2020, in the United States. His father Khaled kept the name of his second son, Aalam a secret for a while. He first publicly revealed it during his acceptance speech after he had won the best rap/sung performance at the 2020 Grammys in January.

At the ceremony, Khaled said,

“I want to thank my beautiful queen Nicole [Tuck]. I just had a new baby boy a week ago. It (Aalam) means ‘the world’ in Arabic.”

Khaled at the Grammys also said the reason he went with the name Aalam was that the Holy Quran used the moniker on several occasions.

The Billboard chart-topper also went on to dedicate his award to the late Double Up singer Nipsey Hussle and hip hop.

While the Spies In Disguise actor streamed the birth of his first son’s life on Snapchat, he didn’t bother to do so on his second, Aalam.

Khaled later nevertheless shared a series of pictures of the process with his fans on Instagram which also included the doctor who performed Aalam’s delivery. The now 46 years old rapper first shared the picture of his son, Aalam on Instagram on January 29, 2020.

Khaled at the time revealed his second son arrived at 11:42 in the night. The now two years old, Aalam, the youngest child of the Platinum-certified singer, DJ Khaled, and his wife, was born on January 20, 2020.

During his birth, Aalam reportedly weighed 8 pounds, 4 ounces. Alongside the first public photo of Aalam, where his eldest son, Asahd is sitting beside his younger brother, enveloped in blankets, the record producer wrote,

Khaled had first announced the news of Aalam’s incoming in mid-September with a video through which he showed his wife, Nicole’s sonogram appointment.

Whilst announcing the news he also addressed his first son and how he was going to get a brother. On Aalam’s first birthday, Khaled shared a video on Instagram which included the moments amidst the birth of his second child.

The footage clearly showed how nervous Asahd’s father, Khaled actually was. Though once Nicole gave birth to Aalam, the hip-hop artist couldn’t contain his excitement.

Aalam’s paternal grandparents originated from Palestine. They reportedly used to sell clothes in a flea market in New Orleans, Louisiana. They later ended up owning a store in Orlando.

In fact, Aalam’s now globally famous artist father used to work at his parents’ store; he would mark pants, pull the suits off the racks, put price tags on, and others.

Aalam Has An Older Brother; He May Get Even More Siblings

As mentioned, Aalam has a brother, Asahd two years older than him. What’s more, the boys’ father has mentioned time and again that they are very likely to have more siblings.

Khaled has often stated that he enjoys fatherhood and during an interview in October 2020 with E! Daily Pop, he said he was also looking forward to a third child.

The record executive revealed how he had been wanting to add a daughter specifically. Even during another interview, Khaled confessed he is always so ready to have more kids and it is apparently something he had been talking about most of his adult life.

For the time being, however, Aalam and Asahd are seemingly the Grammy winner’s world.

Aalam Khaled Has His Own Instagram With A Little Less Than 200,000 Followers

Much like his elder brother, Aalam’s too on Instagram with his very own handle. Aalam and his brother, Asahd’s moblogs mostly include their domestic scenes of life at home in Florida.

Khaled and his wife initiated the process for trademarking just two days after their second son was born. The couple also did the very thing for their oldest son and Aalam’s older brother. The trademark apparently allows the Khaled couple to use their children’s moniker on fragrances, cosmetics, skin creams, baby products, sporting goods, CDs, jewelry, children’s book, tote bags, clothing, watches, and DVDs, among others.

Aalam Also Executive Produced One Of His Father’s Songs

Only two months old and Aalam’s father, Khaled announced his son was going to help produce the follow-up of his 2019 album, Father Of Asahd, the songbook named after the Arab Attack’s first son.

Khaled announced the news on his Instagram in March 2020. The Novacanne at the time reported The sequel of Father Of Asahd was going to list Aalam as its executive producer.

Is Aalam Khaled Already A Rich Kid; What Is His Net Worth?

While Aalam’s father, DJ Khaled is colorfully rich with a net worth of over $75 million, his sons while way too young are also well on their way to becoming millionaires and even further. This is clearly apparent from their ongoing lifestyle and their stature in the entertainment sphere. In fact, Aalam’s brother supposedly already has a net worth in the vicinage of hundreds of thousands of dollars.

However, considering, Aalam is still only a couple of years older, it might be a while albeit quick (for his age) before the two-year-old go and start amassing ridiculous sums of money.