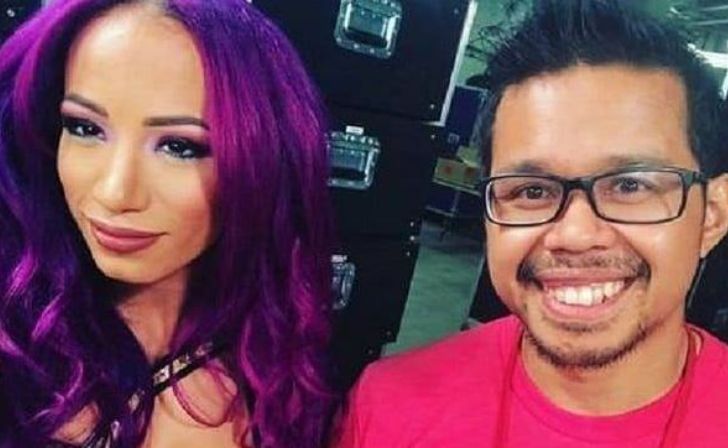 Sarath Ton is a former wrestler turned costume designer who has created for WWE wrestlers like Sasha Banks, Seth Rollins, and more. Ton is also famous as the husband of one of his wrestler-clients, Sasha Banks (Mercedes Varnado).

Sarath’s partner, Sasha Banks, is a WWE Superstar, and actress. She is also a cast in the second season of Disney’s The Mandalorian. Banks and Ton despite being husband and wife for quite a while, have always been effortlessly private about their marriage and relationship.

In addition to various independent promotions, Banks’ husband, Ton also appeared for the likes of Ring of Honor, NWA, and Beyond Wrestling. Ton also competed at IMPACT One Night Only: X-Travaganza PPV in 2015. His WWE debut was in 2012 at RAW under the ring name Rutherford Hayes in a handicapped match against Ryback. Ton, wrestling career, however, ran its course after he suffered a blow to his head; a resulting concussion that forced him to retire from pro wrestling.

Wrestlers and people alike admire him for creating custom clothing that looks extremely accurate to costumes from films like Infinity War. In fact, he took the inspiration from the film to recreate the costume of Thanos for the former WWE champion, Seth Rollins. The work of words down below includes Ton’s wrestling days, why he had to end it, how he gets inspiration for his designing career, his relationship with his wife, Banks, and even the odds and ends.

Is Sarath Ton An Indian; What Is His Real Ethnicity?

While not much about Sarath’s early life or ancestry is known, contrary to rumors, he is not Indian. Instead, the husband of Banks, Sarath Ton reportedly is a Cambodian-born who came to the states with his father and mother. This he revealed in June 2022 whilst wishing his father, a happy father’s day.

Upon giving a shoutout to his father, the fighter turned artist on his Instagram wrote,

Happy Father’s day to the man who risked everything to bring me to this country. I hope I’m making you proud

Ton though grew up mostly in Boston. The PWI Woman Of The Year’s husband, Sarath Ton was born on 9th June 1983 in Springfield, Massachusetts. The now 39 years old Ton, however, now lives in Orlando, Florida.

Ton’s professional wrestling career began in the year 2002 and it ran until the year 2015. Before 2015, he was briefly in the WWE around the year 2012. He reportedly trained under local wrestler and trainer Kevin Landry.

Sarath would spend the next twelve years of his career wrestling all throughout the northeastern United States. That included promotions circuits like Chaotic Wrestling, New England Frontier Wrestling, Top Rope Promotions, and Connecticut Wrestling Entertainment.

As mentioned, he finally made his WWE debut on Monday Night Raw under the ring name Rutherford Hayes on June 11, 2012. At the time he teamed with Willard Fillmore in a handicap squash match against Ryback.

Ton’s WWE career came to an end in May 2015 during his only in-ring appearance for WWE which came in NXT. At the time, he teamed with Jason Jordan in a dark match against The Vaudevillains (Aiden English & Simon Gotch). Amidst the match, Sarath suffered a blow to his head. A concussion followed which forced him to retire from pro wrestling for good and all.

After sustaining an injury from his last WWE match in 2015, the WWE hired Ton under the ring name Mikaze to employ him as a costume designer.

And as for now, Sarath is working as a popular costume fashioner in WWE. Turns out he has been making costumes for the Boss even before he started dating the first woman to compete in Hell In A Cell.

Later, the WWE executive, Triple H came to know about Sarath’s costumes and gave him a trial. Sasha in an interview revealed how one year Paul came to her and asked if her husband is actually a costume designer.

Banks affirmed after which the Triple-H said to her he was looking for help with WrestleMania. Paul then gave Ton a tryout and from there on, Banks’ husband made Triple H’s gear, Bella Twins, and so on.

How Ton Began His Designing Career?

Ton developed his designing skills by taking sewing/design classes in his free time during the course of his wrestling career. Sarath would personally design his wrestling outfits.

He apparently has always grown up loving art. Ton reportedly grew up drawing Ninja Turtles when he was 3 or 4 years old. Sarath was always excelled at art during high school.

He started training to be a professional wrestler during his junior year of high school. In his senior year, Ton took a sewing class, and when he started wrestling he began buying fabric and old clothes.

He in tandem taught himself how to make wrestling clothes. Sarath admits he takes a lot of inspiration from his love of comic books, fashion, and television for his design.

Ton and Sasha met during the days they both use to wrestle in the Independent circuit in Boston during the late 2000s to early 2010s. Sasha and Sarath got to know each other as Ton offered Sasha to design her costume. He even designed Banks’ iconic “Boss” ensemble.

During an interview with Charly Caruso for WWE, Sasha whilst revealing about their first date said she found Sarath a bit too forward. In the same interview, Sasha added how Ton left his own career in between and moved to Tampa with her when she got the offer from WWE.

Banks and Sarath married on 4th August 2016. They tied the knot in a private ceremony among the attendance of several WWE stars and both their family members.

Sasha, however, did not technically and publicly announce her marriage with Ton until March 2017.

Do Sarath And Sasha Have Children?

Although Sasha and her designer husband do not have any children, they are parents to their Corgi, named Ryu Maivia Ton.

Why Sasha Banks Doesn’t Discuss Her Relationship With Her Spouse, Sarath Ton?

Both Sasha and Ton are solidly private about their relationship. Sarath’s ex-Tag Team Champion-wife, during an interview with Afterbuzz TV, explained the reason why she is so covert about her relationship with Ton.

In the interview Banks said that the reason she and Ton hardly talk about their relationship is because of how her fans sometimes are so crazy and constantly send hateful comments to her husband on social media. Sasha said she just hides it because she sees what the internet writes to her partner, Sarath on Twitter which she doesn’t appreciate.

Banks’ husband, Sarath Ton admits he has always been a sneakerhead. In fact, his first job was at FootAction. Later he would work his way up to being a store manager.

Sasha’s husband, Ton has also done a special collaboration with Foot Locker to raise awareness of autism. It was Sarath Ton who designed The “Be Seen” Diadora N9002 For Autism Acceptance Month in April 2022.

Ton has also teamed up with Puma to design a limited edition Sasha Banks-themed sneaker which later they would name GV SPECIAL DETROIT VS BOSTON EDITION.

Is Sarath As Rich As His Wife, Sasha Banks? What Is His Net Worth?

While Ton’s partner of more than a decade, Sasha Banks is by and large a millionaire, it is unclear what esteem Sarath himself holds when it comes to money and financial standings.

It, nonetheless, seems uncompelling that Banks’ husband, Ton is also a millionaire similar to his wrestler wife who reportedly has an estimated net worth of over $4 million. Banks allegedly cashed in most of this wealth during a successful career on the independent circuit.

In any case, considering his however affiliation to one of the richest sports franchises, Sarath’s net worth could still be in the region of hundreds of thousands of dollars at the very least.

Sarath Ton Is Quite Active On Social Media

The husband of the ex-Chaotic Wrestling fighter mostly posts about his designing works, the times he pals around with his dog, clips of his occasional radio and podcast sessions, some pictures of his wife, & others.

Shannon De Lima: Everything To Know About Marc Anthony’s Ex-Wife