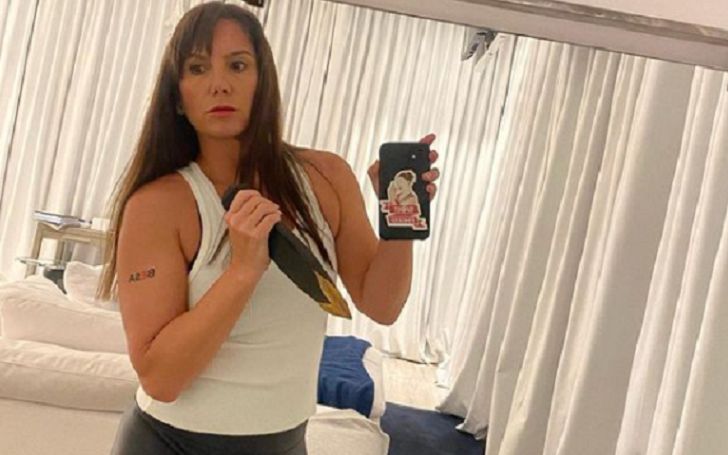 Tiffany Ortiz is popular as the wife of David Ortiz, one of the legendary sluggers in MLB history. Her hubby David, a former Boston Red Sox hero has won a number of major championships throughout his illustrious MLB career. Besides, in the past, the baseball legend went through several ups and downs but his wife Tiffany always stood by his side, making their relationship that has spanned over decades more powerful.

Besides, Tiffany and her husband David who have been married for a long-time are the proud parents of two children. Both of them have been doing great on their own rights. But, what is Tiffany Ortiz up to these days?

Here we have come with some unexplored facts about David Ortiz’s wife. Let’s began!

What is Tiffany Ortiz’s ethnicity? Details on Her Age

Tiffany is Caucasian as per her ethnicity and belongs to an American nationality. As of 2021, Ortiz’s age is 47. She was born on 13th May 1974, in Kaukauna, Wisconsin, the place where Tiffany first came across her future husband David. He used to play for the Wisconsin Timber Rattlers. Besides, Tiffany is a huge fan of the Green Bay Packers.

Both of Her Parents Passed Away Years Ago

Tiffany is the daughter of Lorriane Brick and Terrance Brick. Both of her parents died years ago. Her late dad died on 4th July 2013 at Parkside Care Center in Little Chute. Born on 2nd April 1934, in the Town of Holland, Terrance had worked as a lift truck operator at Thilmany Paper Mill for four decades and more.

In addition, the late old man was a member of a few sports clubs like the Kaukauna Athletic Club and the Kaukauna Lions Club. He was a sports enthusiast who loved to watch baseball games of several teams like Packers, Badgers, and Red Sox.

On the other hand, Tiffany’s mother Lorraine passed away on 9th December 2014 at  St. Paul Home. She was a stay-at-home wife. She also volunteered at St. Aloysius Catholic Church. Moreover, the late woman worked at Kaukauna Piggly Wiggly for years.

Back in June 2019, Tiffany posted a throwback photo of her late parents with a touching caption on Insta. Her caption is,

“These past few days I’ve been wanting to call my Mom and Dad, just really missing them and then I realized they have most definitely been with me. The way they raised me, all of the values they instilled have served me in the most incredible way these last 3 weeks. Thank you Mom and Dad.”

What Does Ortiz’s Wife Tiffany Ortiz Do?

The celebrity spouse is a homemaker who hit the media light for being the long-time wife of David, a former baseball-designated slugger. He played twenty seasons in MLB, making him the first baseman in Major League Baseball history. He was initially signed by Seattle Mariners in 1992 and later went on to play for the Twins. There, Ortiz played six seasons before the team released him.

In 2003, the player signed with the Red Sox, spending the rest of his career playing for the team.

Over the years, Ortiz has worked for several non-profit organizations. Back in 2007, Tiffany co-founded the David Ortiz Childre’s Fund with her husband. The organization aims to, “help children in New England and the Dominican Republic who do not have access to the critical pediatric services they need.”

Similarly, the 47-year-old woman is an active member of UNICEF, an organization that helps children who are in need throughout the world. She is also on the New England Regional Board of Directors.

Furthermore, back in 2010, Tiffany competed in the Pan-Mass Challenge. It was her fifth year doing the PMC that aims to beat cancer worldwide.

When did Tiffany Ortiz and Her Husband David Get Married?

The couple tied the knot in 2002, in a private wedding ceremony. It’s been nearly two decades since they are married and their relationship is still sailing smoothly.

As for their first meeting, the couple first came across when David was playing for the Class A Wisconsin Timber Rattlers in 1996. They were instantly smitten with each other.

Tiffany is the mother of two grown children with David. She gave birth to their first child, a daughter named Alexandria in 2001. They welcomed their second child, a son D’ Angelo Ortiz in 2004.

Back in 2016, Tiffany’s daughter Alexandria received a round of applause from thousands of audiences including her father when the young girl sang the national anthem before the Red Sox home opener on April 11 of the year. Her proud father described the moment,

“It was a surprise, a beautiful surprise. At some point, you start thinking about your kids and the way you raise your kids and everything that you’ve been through. I got caught into those memories, and it was beautiful.”

Here is the video,

On the other hand, their son D’Angelo has actively been involved in the same career paths as his father. The young promising baseball player who stands 6-foot height and weighs roughly 200 pounds widely played baseball at Westminster Christian School in South Florida.

The Couple Rekindled Shorty After Their Separation

Back in 2013, after over a decade of their marriage, Tiffany and her hubby David went their separate ways. At the time, David said,

“There are some situations in life that work out for a period of time and at some point, they don’t work out anymore and you have to move on. I’m moving on. She’s moving on. Hopefully, everybody respects that.”

He also said they separated on mutual understanding.

But a year after their break-up, the adorable duo was back together. And as of now, they are leading a happy married life with no conflict.

Before her marriage to David, there are no details on her past love affairs. But, in the meantime, her husband David has a daughter named Jessica from his past relationship. While most of her details remain out of the media, Jessica graduated from high school in the Dominican Republic.

What is Tiffany Ortiz Net Worth?

Her net worth is $300,000 as of 2021. On the other hand, her husband David’s estimated fortune is $55 million. He has made the aforementioned wealth from his prolific baseball career.

The Ortiz family resides in Miami. David previously owned a house in Weston, Massachusetts. But, he sold it for $3.5 million in early 2021.

What Happened to David Ortiz?

Back in June 2019, Ortiz was shot in the back while at the Dial Bar and Lounge in East Santo Domingo. But, luckily, when the former slugger was ambushed by an unknown man, a few individuals including Eliezer Salvador instantly took him to the nearby Massachusetts General Hospital. Soon after Eliezer’s heroic role, David’s wife Tiffany expressed her gratitude to him.

“I want to take this opportunity to offer our heartfelt thanks and gratitude to Eliezer Salvador, owner of Presidente Sports, for your quick thinking and swift action on Sunday night.”

“Your heroism and selflessness were the first steps to ensuring David could get the urgent care he required. For that, we are eternally grateful.”