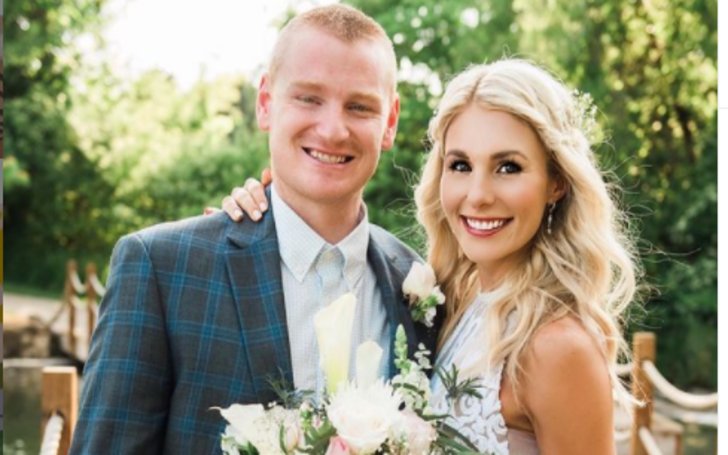 Amanda Hornick is the wife of Wes Bergmann (Weston Bergmann). Hornick’s husband, Bergmann is a veteran competitor on MTV’s The Challenge. He first made his appearance on the show in 2006 on Fresh Meat after appearing in The Real World: Austin. Bergmann is one of the formidable forces in the competition making it to five finals and winning twice.

Wes may not be a hold a good reputation amongst his fellow Challenge co-stars, he, though, seemed to care about one person’s opinion, and that would be his wife, Amanda Hornick.

Here’s what you need to know about Wes Bergmann’s wife, Amanda Hornick.

Where Did Amanda Hornick Study?

Hornick was born on September 17, 1976. As of 2021, she is 45 years old. Growing up she and her family experienced a lot of financial difficulties.

A native of Kansas City, Missouri, Mrs. Bergamn holds a master’s of science in education from the University of Kansas (2016). Her LinkedIn says she specialized in higher education and higher education administration. Hornick received her bachelor of arts in public relations and advertising from Drury University.

Bergmann’s spouse also enjoys volunteering. Additionally, she has served as a head coach for the organization Girls on the Run for 6 years. As of recent, she is on the marketing committee of the organization and has been there since 2015.

Wes’ wife, Hornick is an avid runner, traveler, reader, dog-lover, and foodie. The Drury University graduate is also a huge sports fan and has been a life-long Jayhawks basketball fanatic.

Hornick Is A Yoga Specialist

Weston’s spouse, Amanda is passionate about health and fitness. A certified yoga instructor, Hornick is on the list of instructors and social media specialists for Core Energy Hot Yoga in Kansas City. She occasionally shares inspirational and fitness-inspired content on her Instagram.

As per her LinkedIn profile, she is also a campus recruiter for HNTB. She’s held the position since January 2018. The Kansas City native involves herself in recruiting interns and new graduates to HNTB, an infrastructure firm.

Hornick previously worked as a senior coordinator for a leadership program at her alma mater, the University of Kansas, for over five years. Before that, she was an employee at William Jewell College. Amanda worked there as a senior admissions counselor for over four years. She was also a brand ambassador for Glamour Magazine.

Weston proposed to Amanda in September 2016. Bergmann popped the question at a Kansas City Royals home game. He posted about the proposal on Instagram, captioning: “She said yes!” As per sources, the platinum ring had the shape of a Baguette with a prong setting.

The two had their wedding on Friday, June 1, 2018, in a ceremony that included a few of his MTV costars, MTV News reported. Overland Park Arboretum & Botanical Gardens served as the venue.

The 37-year-old told the publication that his favorite part of the wedding was the vows. The reality star described them as the most beautiful combination of seriousness and hilarity. The guests included his Real World co-stars — Lacey Buehler, Rachel Moyal, Nehemiah Clark *the marriage officiant), Melinda Stolp as well as MTV personality, Devin Walker.

Hornick’s partner, Bergmann was formerly in a relationship with Johanna Botta, who was also part of the Austin season. She also wished the newlyweds by commenting on their picture “Is this his wedding?? Congrats to Wes!” Botta and Bergmann dated for three years and appeared on several shows together. The pair, however, called it quits in 2008.

After the union, Wes tweeted: “Married AF.” Amanda has also shared many pictures of the big day on her Insta since then.

Where Did They Meet Each Other?

On her Instagram, Hornick admitted the question, “How did she and Wes meet?” is the most frequent thing people wanna know about.

Mrs. Bergmann answered she met her future husband at a bar in KC. She was out for a guy friend’s birthday and sitting at a table of about 13 male friends.

The Duel and Rivals II winner then walked up to her, tapped her on the shoulder, and said,

“I think you’re beautiful, I’d like to buy you a drink at at the bar across the street, because I’m leaving.”

The personal blogger said it was a bold move from Wes. She nevertheless, agreed and showed up two hours later at the bar where Bergmann was waiting. The two then started drinking and eventually fell for each other.

In 2019, Wes joked Kyle Christie from ‘The Challenge’ was stalking his wife, Amanda on social media. On his Twitter, Hornick’s husband said he used to think Paulie [Calafiore] was crazy.

“Like, Jesus Christ, Kyle couldn’t possibly be THAT obsessed with Cara [Maria Sorbello]. But now I know how he feels. Kyle is stalking my wife.”

The issue intensified when Kyle commented on one of Amanda Insta’s posts in February 2020. On Valentine’s Day, the Kansas City-born influencer had just shared imaging of her and Bergmann’s wedding day on Instagram to which Kyle commented, “Wish that was me.”

Wes replied to this with an angry face. Kyle even went as far as saying: “[Amanda] I love you too” along with a heart emoji. This became fodders for many tabloids but many considered it a mere joke considering Kyle, himself, was and has been a long-term relationship.

While participating in The Challenge, Amanda’s husband, Bergmann competed for cash prizes that often topped $100,000.

Wes used the prize money he made from The Challenge and other MTV appearances to be the lead investor of BetaBlox, a five-year-old Kansas City-based startup incubator.

The company consult, mentor, and market entrepreneurs in exchange for a 5 percent stake in their business. Hornick’s spouse now has a share in more than 200 companies.

So What About Hornick’s Net Worth?

While, unlike her husband, Amanda’s fortune doesn’t get that much attention, she presumably still must be earning a decent earning considering her Insta fame. Additionally, she has advocated for several lines of products from which she must have benefited quite well.

To put into perspective, yoga instructors in MO are typically known to rake in anywhere from $30k to $100k. Seeing her portfolio and popularity, Hornick very likely comes among those who earn near the latter figure. She plausibly cashes in the region of six figures or so from all her fitness knowledge.

Hornick And Her Husband Lost Their Dog To Cancer

In March 2021, Challenge legend Wes Bergmann took to IG with the heartbreaking news that his beloved dog Bootstrap was sick and only had months left to live.

Bergmann revealed that his dog Bootstrap had bone cancer and a “large, rapidly growing tumor” in his nasal cavity. The news hit hard to Wes and his wife, Hornick. They spent as much time as possible with their dog during his final days.

Bootstrap died on March 15, 2021. While paying a tribute to his deceased pet, the reality star revealed Bootstrap was his best friend, co-founder, son, and the wingman that brought him together with his wife.

Hornick’s Favorite Places To Travel; Some Questions From Her Fans That She Has Answered

In May 2021, while entertaining the Q and A session over at her Instagram, the yoga instructor mentioned Slovenia holds a special place in her heart. The influencer explained the country to be a gem having an excellent influence from Italy and Austria with fresh seafood. Her other go-to places include Costa Rica, Hava Supai Falls, Arizona, and Alaska.

Likewise, here are some facts Hornick fans wanted to know:

Does she ever get told she looks like a celebrity?

Yes. Kirsten Bell, too many times.

One of my favorite electronics.

His ability to make me laugh.

Does she juice every day?

Who Is April Kimble? Inside The Life Of Lyle Lovett’s Wife