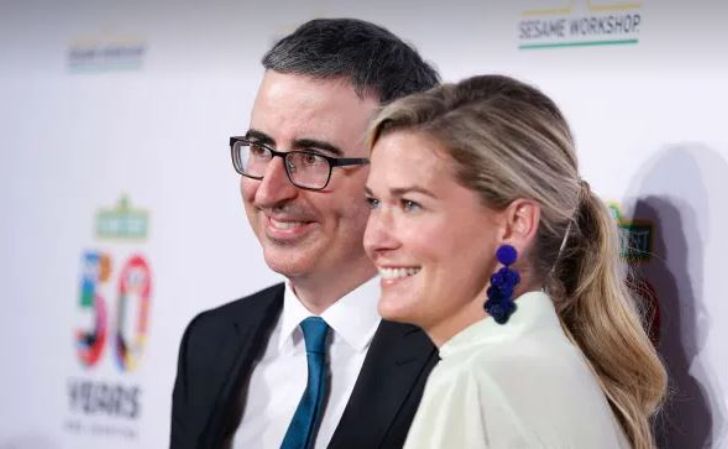 Kate Norley is a former war medic, an advocate for war veterans, and a Republican who is better known as the wife of John Oliver, the host of the HBO series Last Week Tonight with John Oliver. Norley’s husband, Oliver has proven to have one of the biggest personalities in modern television.

It often comes as a big surprise to people that John Oliver is husband to Kate and the two seem to be very happy together considering Norley is a staunch Republican, while her husband, John is a Democrat. Although among Oliver and his wife, the former is more recognizable, turns out, that Kate Norley is also a lot more interesting character.

Norley apparently is more of a heroic person with just as illustrious a career. For starters, she served in Iraq as an Army combat medic in addition to being an activist for veterans’ rights. And Oliver has been always more than happy to praise his wife.

Though the couple also likes to keep their private life under the hat. So who is John Oliver’s wife exactly? Know an extended answer in the headings below along with how she and Oliver are keeping it together despite their polarizing political belief.

Contrary To Some Rumors, Kate Norley Isn’t British; She Instead Is An American

The American Nationale, Kate Norley was born on May 25, 1978. While Oliver is of British nationality, his wife Norley is a native of Arlington, Virginia.

Kate apparently is the child of affluent parents, but she has made it explicitly clear that money never made for an easy, lazy life for her. Her mother, Pam Mannion, and birth father, Walt Norley, who designs golf courses with Jack Nicklaus in Florida, divorced when Norley was 4.

The now 44 years old Kate Norley’s parents apparently always encouraged her to cut her own path. The Virginia-born describes her mother as altruistic and the one who motivated her to serve others.

Long before Kate joined the military, she went through a horrible accident at 16-years-old. Norley was traveling to a soccer game on her bike when a driver lost control of his vehicle and struck her.

In consequence, Oliver’s wife experienced “severe head trauma” and subsequently lost all of her cognitive abilities which meant that she had to learn to read and write once again. Norley credits her mother for helping her get back on her feet after the accident.

Kate Norley met her future husband John Oliver in Sep 2008 when the latter was working as a senior British Correspondent on The Daily Show with Jon Stewart as a correspondent.

She was attending the Republican National Convention with fellow veterans when she met Oliver. In the role of correspondent, Oliver would often go out in the field to record interviews in which he openly mocked people directly to their faces.

Whilst doing so, one day, Oliver found himself in a rough situation during his Daily Show tenure and it had nothing to do with the kind of questions he asked. Instead, when the Emmy winner was trying to gain access to politicians at the 2008 Republican National Convention in St. Paul Minnesota he entered a restricted area.

Shortly after, security became aware of Oliver’s presence and began persuing him planning to kick him out.

When the five-foot-eleven-inches tall Oliver and his camera crew tried to get away, they came across a group of veterans who helped them to hide, and avoid arrest, and potential deportation.

Among the veterans, was his future-wife Kate Norley. After that fateful meeting, Norley and Oliver hit it off.

Kate Norley And John Oliver Started Off Their Relationship Via Emails

After John Oliver and Kate Norley met in 2008, they began trading emails. They shortly became a couple. After dating for three years, Oliver and Norley married each other in October 2011.

The Birmingham-born host had proposed to Kate in St. Thomasin 2010. Two years after their wedding, at the end of 2013, after Oliver left the Daily Show, he and his wife Kate left for Afghanistan as part of the USO Tour.

During their outing in the middle east, they slept in the barracks, ate with the troops, and performed at more than half a dozen forward operating bases.

Kate Norley Has Two Children With Her Spouse, Both Sons

The ex-British correspondent and Norley are also parents to two sons. They had their first child, a son named Hudson in November 2015, and their second child, also a son in June 2018.

Norley had given birth to Hudson prematurely, but the baby grew to be healthy.

How Did Kate Begin Her Military Career?

Norley enlisted in the military shortly after graduating from boarding school at Episcopal High School.

The Smurfs actor’s wife decided to join after the 9/11 terrorist attacks. She was then 19.

Norley Was A Counselor To Soldiers In Iraq

Kate provided counsel to soldiers returning back to combat. She performed work as a counselor to the soldiers in Iraq as well.

Her role in the Gulf War was counseling soldiers experiencing war-induced mental trauma. In addition, she also worked with squatters living around Camp Blackjack, the 1st Cavalry Division’s base in northwestern Baghdad.

Despite the danger in Iraq, the English man’s wife, Norley told the Washingtonian on June 1, 2008, that she wanted to remain there until completing her mission.

During her time in Iraq, Norley encouraged young women to help the country with its rebuilding efforts.

She also met with eight University of Baghdad students after US forces captured Saddam Hussein. Kate says she saw all the horrors of combat during that tour. In total, Kate did 16 months overseas.

For her unit’s efforts during the war, Norley received a 1st Cavalry Division lapel pin. People can occasionally see her husband, Oliver wear the pin on his jacket.

Kate also received the Combat Medic Badge for providing medical care while under fire. When she returned from Iraq, John’s wife was assigned to Walter Reed Army Medical Facility in Washington D.C.

After this, she attended a medical degree at George Washington University. By 2008, the spouse of the English journalist had completed her time in service and dedicated herself to advocating veterans’ rights.

After her service ended, Kate went back to Iraq once again though this time as a journalist. She went back to report on changes the place had experienced since her departure from the service.

Oliver says since his marriage to Norley, he has changed his way of seeing the military, especially after the couple went on a USO tour in Afghanistan together. Several times, the former co-host of The Bugle has talked about how much he respects his wife’s service.

In an interview whilst talking about his wife’s service in the military, the comedian said,

“When you’ve married someone who’s been at war, there is nothing you can do that compares to that level of selflessness and bravery.”

Norley has also donated a lot of her time and money to worthy causes. As such she is a part of Team Rubicon, a group that does a lot of good work.

Team Rubicon strives to “provide disaster relief to natural disasters victims, be they domestic or international.” As a member of Team Rubicon, Norley pairs her skills and experiences as a military veteran with first responders, medical professionals, and technology solutions.

Kate Norley Is An Advocate For The War Veterans’ Rights

John’s wife, Norley is passionate about the rights of American veterans. After the end of her military service and returning to the United States, Norley began advocating for better funding for veterans.

And as mentioned, she is a veteran rights advocate for Vets for Freedom, an organization functioning since 2006 by the country’s Iraqi and Afghan war veterans. The advocacy group’s purpose “is the advocacy of victory in America’s War on Terrorism, and support of candidates with positions consistent with the likewise goal.”

In fact, the reason why Norley was at the convention where she met her husband, Oliver was for veteran advocacy. Kate’s work for the Veterans has led to her appearing on multiple news outlets like Fox News.

The Virginia-born former medic has talked to numerous outlets and appeared on Fox News to campaign for more funding for veterans. The ex-medical aid for the military is still advocating for the rights of veterans in the country and remains a member of Vets for Freedom.

Kate is also all about empowering women. Since the end of her service in the military, Norley has also been working with the non-profit world in hopes of making a difference by empowering other women.

She once said her ultimate life mission is “to send American women to the third world so other women can see what it’s like to have rights and power.” Also in Nov 2013, Norley acted as a first responder in the Philippines after Typhoon Haiyan.

Is Kate Norley A Conservative Republican?

While Kate clearly is a right-wing supporter, whether she supports the conservative aspects of it is yet to be obvious. So far, she’s talked about women’s rights and as mentioned veteran rights. It, however, is unclear what exactly are her takes on those issues.

There though apparently lies some sort of radio interview with Oliver where the interviewer asked if Kate was conservative, which he denied. Norley although is Republican, in the ideological minority, she presumably is somewhere to the left of the Republican ideologies.

Is Norley On Social Media?

Conversely, Norley’s spouse is quite exertive with his Facebook and Twitter handle; the investigative journalist keeps his followers updated with his hilarious take on several political & likewise points at issue. He though doesn’t hold an individual log on Instagram.

What you should know about Tricia Day, JJ Da Boss Wife: Age, Net Worth, Husband