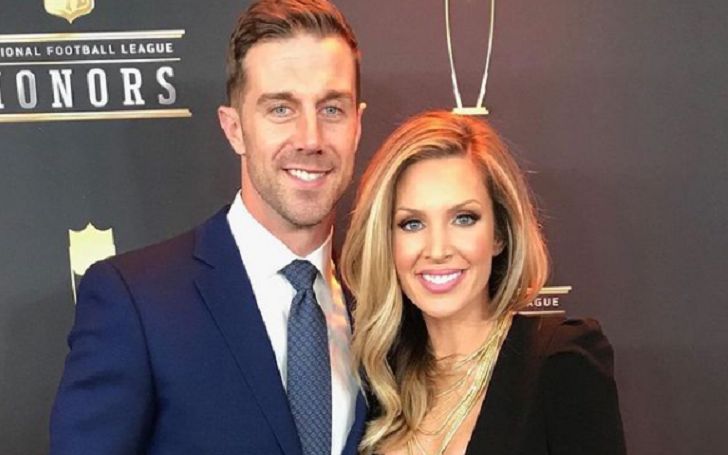 Elizabeth Barry is a former American cheerleader for Oakland Raiders. She is most famous as the wife of an American football quarterback of the National Football League.

Barry’s husband is one of the most successful American footballers with a number of major victories to his name. He went through a lot of ups and downs, including his gruesome leg injury that resulted in several brutal muscle transfer surgeries.

The couple has been leading a blissful married life for years now. But what about their children? Well, let’s learn everything about Alex and Elizabeth’s married life in today’s article. Also, let’s find out Elizabeth’s family background and her relationship with her parents.

The couple first came across when Elizabeth was a cheerleader for Oakland Raiders and her husband Alex was playing for the San Francisco 49ers.

Talking about their initial days, Elizabeth Barry told Brobible that Alex was quite shy. She added that he would only make small talks while they go out for a date. Talking to the outlet, Elizabeth also reminisced their first date at a St. Patrick’s Day Festival in San Jose, California.

Elizabeth Barry’s Engagement With Alex Smith: When Did They Get Married?

Alex and Elizabeth dated for some time before Alex proposed to his then-girlfriend in 2007. They both were in their early 20s at that time and Alex, then-raising-youngster had just started showcasing his footballing skills with the San Francisco 49ers.

The lovebirds tied the knot in February 2009. Their wedding ceremony took place at the Palace Hotel in San Francisco. Their respective family members and close pals were the attendees of the private wedding.

The pair has crossed several ups and downs as husband-and-wife in their nearly 12-year-long married life. Unlike many other celebrities, Alex and his wife love to display their happy life on social media. They also wish each other on many special days as a couple.

Back in February 2019, marking their 10th wedding anniversary, Elizabeth posted a throwback photo of the couple on her Instagram. “10 years of marriage, 3 babies, a few moves, and memories to last a lifetime. I couldn’t imagine doing life with anyone but you. Happy Anniversary” wrote Elizabeth in the caption.

It becomes hard for every busy couple to manage their love life and professional life, but Elizabeth and Alex’s support for each other has made it a cakewalk for them.

Elizabeth Barry Is A Mother Of Three Children

Alex and Elizabeth Smith are proud parents of three. They welcomed their first child, a son, Huddy on 11th May 2011. Two years later, the Smith-duo gave birth to their second son, Hayes Montgomery Smith on 20th March 2013.

Elizabeth and Alex welcomed their third bundle of joy, a daughter, Sloane Smith in early 2016. The proud mother of three often shares her children’s photos on social media on several occasions like their birthdays and father’s day among others.

The Washington Redskins quarterback, Alex Smith suffered arguably the most tragic leg injury in NFL history on 18th November 2018 playing against the Houston Texans. Following the incident, Smith underwent surgery to treat his injury, but unfortunately, it developed necrotizing fasciitis, a flesh-eating bacteria.

As a result, the player had to undergo many brutal muscle transfer operations. Throughout a month-long stay in the hospital, his doting wife Elizabeth remained by his side.

In an exclusive interview with ESPN in early 2020, Elizabeth revealed everything about the lengthy recovery of her hubby. She opened up about how she dealt with the doctors during the multiple surgeries of her husband. Elizabeth remembered the doctors frequently reminded her that her husband’s life was still in jeopardy. She told the network,

Finally, in August 2020, 21 long months after the injury and after undergoing 17 critical surgeries, Alex’s medical team showed him the green signal to join his football team.

A decade ago a terrific incident happened, Alex also lost one of his close friends David Edwards who killed himself in August 2008. Upon hearing the news of David’s suicide, Alex was completely devasted. He said in an interview with ESPN, “I was in complete shock. I just didn’t want to believe it.”

The football star promptly called his then-fiancée, Elizabeth, who rushed over to the hotel. Apparently, Smith was also a new face in the field who just started out his career. It was a too unpleasant time for him as on one hand his best friend committed suicide and on the other hand, his football journey just kicked off.

But, Elizabeth was also with Alex at that time. She told ESPN,

“Alex still has moments when he needs to go through the grieving process. He didn’t really get that opportunity when all this happened.”

The couple gave a tribute to Edwards when the two married in 2009 at the Palace Hotel in San Francisco.

Where is Elizabeth Barry From? Her Parents

The celebrity spouse, Elizabeth belongs to the Caucasian ethnicity and holds an American nationality.

She Has Four Siblings

Elizabeth Smith grew up along with four siblings; three brothers including Nick Barry and one sister. She shared a photo of her brothers on the occasion of National Sibling Day in April 2014.

Elizabeth Barry didn’t get involved in any kind of job after she started her relationship with Smith. Further, her earnings from her work as a cheerleader are unknown to the media. Due to this, it is not feasible to mention Elizabeth’s net worth as of now.

On the other hand, her husband Smith has an estimated net worth of $55 million. He earns a decent annual salary of $14 million. His extensive football career that consists of a series of victories plays a major role to rack such a handsome amount.

Barry is active on a few social media handles with considerable followers. She has an account on Instagram and Twitter. She mostly shares her family photos on the platforms.

Who Is Stephen Belafonte? Untold Truth About Mel B’s Ex-Husband