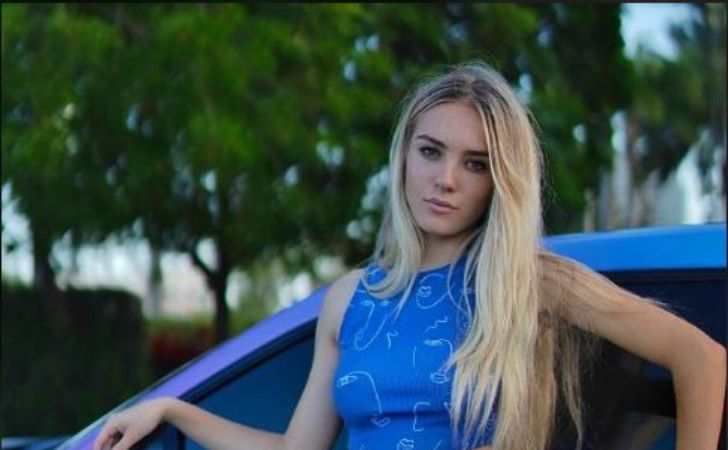 Angelina Dimova is a Ukrainian-born US-based YouTuber, fitness enthusiast, car fanatic and model, former junior tennis player, and social media influencer. While she never made it to the WTA, Angelina still hits the ball like a pro and often always comes across as someone who can make it to the pro anytime.

Dimova, nonetheless, is more popular for her social media buzzes than her skills on the tennis court. Residing in Miami, Dimova has growing followers, especially on Instagram where she is all about promoting cars and her curvaceous body. As mentioned she is a car model advocating, especially for Mopar under which she speaks for models ranging Chrysler, Dodge, Jeep, Ram, and others.

Dimova is also quite a big name on TikTok with close to 1 million followers and a little less than 10 million likes. See what else there is to know about the Eastern Europe girl. Scroll through how she made it to the US, her family, her relationship, and more.

Angelina Dimova Immigrated To The USA In The Mid 2010s

Dimova moved to the USA in late 2016. It, however, is all for approximation on how she immigrated to the west. The 21 years old car model is yet to share if she relocated with her parents or on her own.

So far, she has also remained to share the whatnots of her mother and father. The now 21 years old, Angelina, nevertheless, has made it more than obvious that she is from Ukraine. Be it through her YouTube or her Instagram, Facebook, and her other social media moblogs.

Angelina who now resides in Miami was born in Odesa, Ukraine on April 4, 2001.

Angelina Dimova Has A Brother; He Struggled A Lot To Enter The States

While she hasn’t revealed much about her family, Dimova does at least have one brother who is older in age. Dimova’s brother, who is a fitness trainer, also stays nearby with his social media star sister.

The brother-sister duo however didn’t meet each other for six years after Angelina moved to the states while her brother stayed in his native Ukraine and also in Eastern Europe.

Angelina’s brother during one of his sister’s YouTube videos revealed he tried to enter the States earlier. He, however, failed to secure visas multiple times. Because of visa denials, he said he lived around Barcelona, London, Dubai, and Tijuana before finally being able to enter the US.

Before finally reuniting with his sister, he, though, spent quite a while in Mexico. There he also endured a pretty frustrating period of the immigration process and waitings.

Angelina Once Broke Her Collarbone

Dimova in early June 2022 through one of her YouTube videos revealed how she broke her collarbone a couple of weeks prior.

Angelina Shares How She Broke Her Collarbone

In the video titled, How To Come To The USA without a visa and how much does it cost? the young adult says because of her fractured soldier, she was only traveling on needed schedules. She likewise was also always wearing a vest that held her collarbone.

Dimova broke her collarbone after falling off of her skateboard which she also showed to her fans through her YouTube channel.

I believed in myself very much because I already rode it very well. I thought I had mastered it but during acceleration, I leaned forward and my skateboard got stuck on asphalt. After that, inertia threw me off of my board and I ended up shattering my collarbone,

said the Mopar girl on how she fractured her shoulder.

Before her career as a YouTuber and social media star, Dimova used to play tennis as s junior competing in ITF for her birth nation, Ukraine. Dimova started her junior tennis career in May 2012 competing in the Nashi Dity Cup until the round 32nd where she lost to a Russian opponent, Yuliya Kizelbasheva.

The same year, Angelina would also compete in Kravchenko Cup and Wilson Cup U12 but would fail to reach ahead of round 16 in both. The following year, in 2013, the IG model participated in a total of seven competitions.

Her best finish, however, would only come at two of those. One being – in April in Azores Open 12 and under, where she reached the semi-final, and the other at Nov GD Tennis Cup U12; also where the Odesa-born remained until the last four.

In 2014, Dimova played in almost a dozen tournaments, though, she didn’t progress any further than the last eight in any of the events. The year 2015 saw Angelina making it to more than 12 tennis events. That season her best finish was reaching the semi-finals in May Antei Cup where she lost the title race after losing to fellow Ukrainian, Viktoriya Pertenk in the last four.

2016 would be the last time, Angelina ever was a professional tennis player active for silverware in her home country. Her last ever recorded bout in Ukraine was against Anastasiya Yakubechko at Galychyna Cup;  Yakubechko defeated Dimova in the round of 16 with a score of 61 63.

After that, Angelina made her debut in the US competing in JA Platinum/Orange Bowl International Tennis Championship in Plantation, Florida. The blonde model made it up to the competition’s last eight. This ultimately would be Angelina’s last ever professional tennis duel.

Did She Ever Make It To The Rankings?

The former tennis player on the ITF Junior did partake in a number of events. However, due to her leaving before she could make it to the pro, Dimova remained far from achieving her WTA ranking. As such, while the results on the ITF tour do form part of the WTA rankings, Angelina’s ITF junior tour doesn’t.

Nonetheless, seeing that she still hits the ball quite well, there’s always a good possibility of her comeback.

How Rich Is Angelina Dimova; What Is Her Net Worth?

For all the luxury four-wheelers Dimova flaunts on her socials, one may have a hard time considering the Ukrainian tennis player turned model below an average star both in terms of money or reach.

It nonetheless is open to debate whether Angelina’s net worth pauses in the proximity of millions of dollars.  Though from the looks of her Instagram life, the Gen Z influencer comes across as quite a well-off Floridan.

Angelina Instagram Apparently Confirms She Doesn’t Have A Boyfriend

Again as evident from her Instagram posts, it might be safe to say Angelina is currently without a partner or boyfriend as such. Dimova for years has been showering arrays of images though essentially all of her feeds only have room for herself and her love for cars or her modeling pursuits.

For the time being, it seems improbable the Ukrainian is going to open up about her love life any time soon. It resultantly might be a while before Angelina’s fans start seeing the car model posting out anything deeply personal, something in regards to her relationship or any leads on likewise issue.

Both Dimova and her brother have been pretty vocal against Russia’s recent invasion of Ukraine. The brother and sister, numerous times, have exchanged their views on Russia’s unprovoked attack on their birth country.