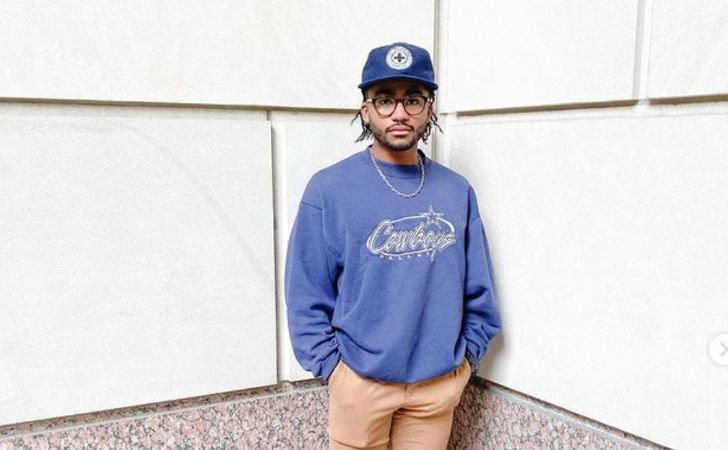 Caziah Franklin is the youngest child of Kirk Franklin and Tammy Collins. Like his Grammy-winning father, he is also into musicals and has also released a few independent albums. Besides, he is also a writer, & storyteller.

Kirk Franklin’s son Cazie is just 20 years of age at present and has already achieved decent fame. In fact, he has also amassed decent popularity on social media platforms including Instagram and Twitter as well.

In this article,e we are going to talk in detail about his career, love affairs, girlfriends, and much more.

A musical artist and storyteller, Caziah was born on September 5, 2000, in Fortworth, Texas. At present, he is 20 years old. He is the youngest child of father Kirk Franklin and mother Tammy Collins.

Born in an elite family, he had a pretty lavish upbringing. He lived together with her parents for the most part of his childhood and he shares a great relationship with both her mother and father.

Talking about his education, he did his high school at Oakridge High School. Later, he attended Belmont University, which is a private school in Nashville Texas. Just for a fact, Caziah wanted to study at Belmont, since he was in 7th grade.

Caziah Franklin Is Passionate About Music

Influenced by his father’s professional career as a singer, Caziah got into music from a very age. Along with his inclination towards singing, he is also interested in musical instruments. In fact, he is an avid guitarist and drummer as well.

He has even mentioned that he started playing drums when he was just around 3 years of age. At present, he loves to perform on stage and often takes part in gigs and concerts, which he flaunts on his Instagram.

Well, his music is more of a mix of jazz, R&B, indie rock, and neo-soul.

Kirk’s son Caziah is in a romantic relationship with his girlfriend Alena Pitts. Apparently, the couple is dating for a while, however, they revealed their relationship in June 2021.

Hinting at their romantic relationship, Caziah’s girlfriend Pitts posted a beautiful photo of herself with him, were in the caption, she wrote “him” with a heart emoji.

It didn’t stop at that as Franklin also indirectly expressed his love for her via a post where he shared her photo with a caption that reads,

From the best weekend with the best girl🤎🌿

Needless to say, their love for one another is very evident and we wish it continues for the longest time. Hopefully, they reveal their love openly and beautifully state how their beautiful journey began. That said, there are rumors that the duo began dating after they met in Haiti.

Who Is Caziah’s Girlfriend Alena?

Well, Caziah’s beautiful girl Alena is an actress, author, and vocalist by profession. As an actress, she made her debut back in 2015 with The Kendrick Brothers’ movie, War Room. The movie proved to be a huge success becoming the sixth highest-grossing Christian movie of 2015.

Other than that, she has appeared in other TV series like Marcus & Joni (2015), Parent Compass (2016). Besides, she has also co-authored three-book fictional series, Lena In The Spotlight (Zonderkids, 2017),  and The Daniel Sister Series.

His Parents Are Very Successful

Like we said earlier, Caziah’s father is a very successful singer, actor, and author as well. Coming with his debut album Kirk Franklin & the Family in 1993, Caziah has so far released numerous songs and albums.

Some of his successful albums are The Rebirth of Kirk Franklin, Kirk Franklin & the Family Christmas, & The Fight of My Life, to name a few. Likewise, he is also the winner of 15 Grammy awards for his songs and albums like Whatcha Lookin’ 4, The Nu Nation Project, Help Me Believe, Hero, and several other

Talking about his mother Tammy, she is a former make-up artist. She quit her job back in the day to dedicate her time to the family.

20 years old Caziah is very active on socials. He is on Instagram with over 55k followers as of 2021. Likewise, on his Twitter, he has over 1600 followers. On both platforms, he pretty much gives insight into his personal and professional life.