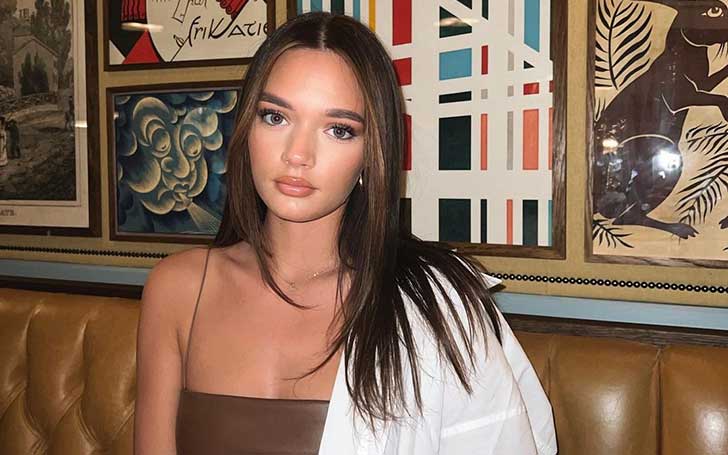 Daisy Tomlinson is an English social media personality and influencer. She is better known as the younger half-sibling of the former One Direction member Louis Tomlinson. Daisy is still a teenager, but she has already gained massive fame and fan base. She is a popular face on Instagram and TikTok.

Daisy got early media attention due to the immense fame her brother Louis got for his band. It helped her gain fans on social sites in her early days as a social media influencer. Even though it’s been a few years since Daisy made her way to the limelight, lots of her fans are still unaware of many of her personal facts.

So, today, we have come up with all the details you need to learn about Daisy Tomlinson. Let’s dive in.

Daisy Tomlinson Has a Twin Sister – Her Birth Details and Parents

Daisy Tomlinson was born on March 23, 2004, to her parents Mark Tomlinson, and Johannah Deakin. She has a twin sister, Phoebe Tomlinson who is an influencer in herself. Phoebe describes herself as a blogger, influencer, and model on her Instagram. Daisy is aged 18 as of 2022.

Tomlinson is British by nationality and belongs to the Caucasian White ethnicity.

Daisy Tomlinson’s mother, Johannah Deakin was married three times in her lifetime. Daisy was born from Johannah’s marriage to her second husband Mark Tomlinson. It is not known when Daisy’s parents met and how their relationship went ahead. But, as per the records, the pair separated in 2011 after giving birth to four children together.

Daisy Tomlinson’s Siblings – She Has Six

It’s a very well-known fact that Louis Tomlinson, the famous British singer is Daisy’s brother. Louis was born from Johannah’s first marriage to Troy Austin. Johannah and Troy split up when Louis was a toddler back in the ’90s. Louis didn’t have a good relationship with his biological father, so he adopted his former step-father, Mark Tomlinson’s surname.

Daisy has five more siblings, including her twin sister Phoebe. She has two biological siblings, Charlotte “Lotte” Tomlinson, and Felicite Tomlinson. She also has twin half-siblings, Ernest and Doris Deakin (born February 10, 2014) from her mother’s relationship with her third husband, Don Deakin.

In 2013, two years after her split from her second husband, Johannah announced her engagement to doctor Don Deakin. The pair were expecting twins at the time of their engagement. They got married in July 2014, months before they welcomed their twin children.

Daisy Tomlinson has already been through two dark phases in her life. First, in 2016, she lost her mother, Johannah to leukemia, and two years later, in 2019, Daisy lost her older sister, Felicite Tomlinson.

Talking about her mother’s death, Johannah died in the early hours of December 7, 2016, at the age of 43. The grief-stricken family announced the news in a statement that read:

“It is with immeasurable sadness that Johannah Deakin’s family said goodbye to Johannah in the early hours of Wednesday, Dec 7. Earlier this year Johannah was diagnosed with a very aggressive form of leukemia that required immediate and continuous treatment.”

“We respectfully request that the family are given time and space to grieve in private.”

Daisy was just 13 at the time of her mother’s death. It literally shook her to the core. She mourned her mom’s death on social media with various different posts and she still misses her mom on her posts. Meanwhile, back on December 7, 2021, Daisy took to her Instagram sharing a photo of her mother on her fifth death anniversary.

“5 years, half a decade since we had to say goodbye. I struggle to find the right words, because no words could do justice to the way I miss you now and everyday,” wrote Daisy in the caption.

According to London Metropolitan Police spokeswoman Claire Cooper said police and ambulance were called to Felicite’s residence following reports of a woman “in cardiac arrest.” It was later confirmed that Felicite died of a drug overdose.

Just days after Felicite’s demise, Daisy took to her Instagram expressing her grievance over her sister’s death in a lengthy caption. The picture she shared included Daisy and her twin sister, Phoebe, and their two older sisters. “My heart is bleeding. I keep imagining and praying they have the wrong person. Not my sister, my best friend,” wrote Daisy. Have a look at the post.

Meanwhile, Daisy’s brother, Louis took to Twitter in April 2019 thanking all of his fans and followers who showed their support and kindness following Felicite’s death.

What about Daisy Tomlinson Love Life? Who is Her Boyfriend in 2022?

Daisy is a social media influencer, so she usually shares everything related to her life on her socials. However, Tomlinson doesn’t really share her love life with her fans. Going through her Instagram posts, we found out that she is pretty close to her family, especially with her siblings. Her posts often show Daisy and her siblings enjoying their time whether at their home or outside. But, what about her dating life?

Well, there isn’t any conclusive evidence if Daisy Tomlinson is dating anyone currently. But, several online sources including Distractify have confirmed that she was dating Tom Sharman until early 2020 at least. Tom is a famous YouTuber. The tabloid mentioned that Daisy and Tom started seeing each other back in 2017.

Her Career Endeavor and Role of Louis Tomlinson

The 18-year-old English influencer and model was just 6 years old when her brother Louis hit the limelight with his boy band, One Direction. So, her brother’s fame initially helped Daisy earn a significant fan base.

Daisy and her twin sister, Phoebe were interested in music since their early days. So, they started singing cover versions of Louis’ songs and sharing them on social media. The duo caught the attention of many in a short time and rose to fame soon.

Daisy has also made her screen appearance in One Direction’s movie This Is Us. Besides, Daisy and her twin sister Phoebe own a YouTube channel named ‘Daisy and Phoebe’ which has more than 34k subscribers as of early 2022. The sisters often post makeup and skincare tips on their channels. Besides, they also performed the popular whisper challenge.

Talking about her career as an Instagram influencer, she is relatively new in this field, however, she has already earned more than 1 million followers. Besides, her twin sister has similar followers on the platform. Meanwhile, she describes herself as a digital creator on her Insta bio.

What is Daisy Tomlinson Net Worth in 2022

Daisy is still in the budding stage of her career. So, there are a lot of things she has to achieve. But, when it comes to her net worth, she has already amassed a significant. If the online sources are to be believed, Daisy Tomlinson has a decent net worth of hundreds of thousands of dollars. But as of now, the exact estimation is not made.