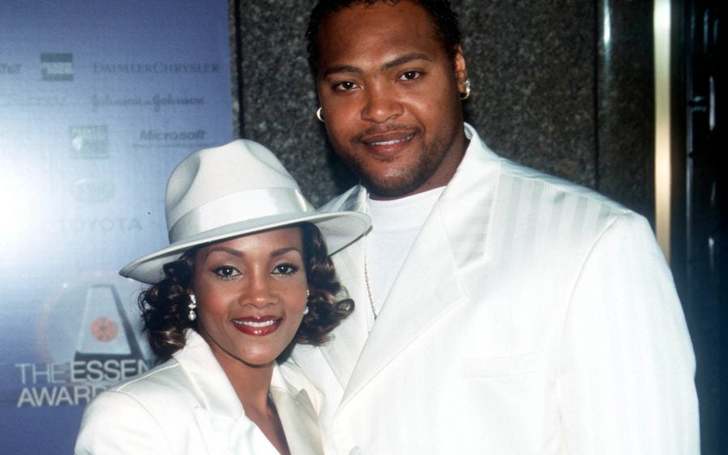 Christopher Harvest is the former husband of actress, Vivica A Fox. Harvest’s ex-wife, Fox is known for her breakthrough roles in two box-office-hit films, Roland Emmerich’s Independence Day and F. Gary Gray’s Set It Off. Vivica is also more so famous for portraying Vernita Green in Tarantino’s, Kill Bill, Vol 1.

Harvest and Vivica were husband and wife for about four years. What started as a Cinderella-esque relationship for the actress turned out to be a one-sided effort and too demanding. The romance eventually turned sour for the couple and Chris became just another has been to Hollywood.

So what exactly went wrong? Were both the partners guilty? Did they even try to reconcile? Also where was/is Christopher before/after the Vivica A. Fox? Know all these in the writings below.

Who Was Christopher Harvest Before Meeting Vivica A Fox?

Puzzling enough, Harvest’s life before being the husband of Vivica Fox is no less than a tiring mystery. So much so, not even the birth details of the actress’ former husband have been decoded. One could rule Harvest is just another long-lost personality who was once in the spotlight because of their relationship with some Hollywood star.

Reasoning his astounding height, some claim he was a collegiate athlete. That, however, has almost no credence to date.

The year was 1996 and it was the month of December, the 16th day, Vivica writes in her book, “Every day I’m Hustling.” The actress mentions she had just wrapped Soul Food and was back in Los Angeles. Vivica tells she and her girls wanted to go out to celebrate her homecoming, and so they headed to Bar One nightclub in Beverly Hills.

As they were hanging and catching up on the various storylines of each other’s lives, this six-foot-nine guy comes and approaches them. The man was none other than Harvest who then said, “Are you, Vivica Fox?” to which his future wife replied, “Yeah.”

Vivica admits she was flattered but nevertheless said, “You’re a warm brother. but I have to go.” She then walked away from him onto the dance floor. After a while, Chris bought twenty roses from outside whilst Fox started to have a conversation with some other guy. Harvest nonetheless cut in and started handing Vivica those twenty roses, one by one. The Soul Food star claims it had been so long since she had been wooed and it worked.

Christopher Harvest Proposed Vivica A Fox With A Platinum Ring

Four months after their first meeting, Vivica let Chris move into her house. She says she was truly in love, at the time. Harvest proposed to her one year to the day that they first met, December 19, 1997. Vivica confesses in her book that she had been expecting a ring.

Fox reveals how worst the meal was the night of the proposal when Harvest took her out to dinner. The Kingdom Come star says the whole time at the restaurant, she was expecting him to take a knee at any moment.

Harvest, however, did no such thing at the diner and on their way back home, his then-girlfriend was going through all; denial, anger, bargaining, depression, and acceptance.

When they got home, Vivica saw the place was filled with roses and candles. Chris finally got down and presented the ring. Fox started to cry so much that she couldn’t even see the ring’s color. She presumed it was gold which she had disliked since her early days.

They married in 1998. Vivica and Chris had their wedding exactly one year later, keeping their devotion to good old December 19, the ex-wife writes. They selected their venue at the Park Plaza in Los Angeles. It was an Art Deco palace used as a film set for old-Hollywood-type movies and as a venue by brides who want an over-the-top Cinderella wedding.

The Indiana-born actress arrived in a horse-drawn carriage that had flowers and white organza and sparkling little lights. Vivica narrates how a paparazzo falling out of a tree delayed her big entrance.

The couple invited 260 people, including Madame King, the woman who had put the bride in her very first fashion show. They also had Magic Johnson and Shaq as well as Holly Robinson Peete, Lela Rochon, and Tisha Campbell-Martin.

The actress bride wore an ivory Escada gown, the veil, and crown. Her six bridesmaids also had Escada. Jeffrey Johnson, one of her boys from Arlington High, who had become a pastor, married them.

The Reason Behind Christopher Harvest’s Divorce With Vivica A. Fox

In May 2021, while sitting down with hip-hop blogger DJ Vlad, Harvest’s former spouse Vivica A. Fox revealed the real reason behind her 2002 split from her ex-husband was due to finances.

The Independence actress stated her agreeing to marriage was rather a result of rush and peer pressure by friends. She also discussed her distress of being the breadwinner and “paying all the bills all the time.”

In the interview, Fox explained she purely decided to walk down the aisle for Harvest because she saw “everyone else was doing it.”

“Everyone was having their Cinderella day, and I just wanted one too, to be very honest with you…I felt peer pressure,”

Vivica further revealed how after the marriage, her then-husband, Harvest didn’t go out and try to pursue things with the same drive that she had for her career. She admitted paying all of the bills took a toll on their relationship. Fox said had to come to the conclusion where she didn’t want to be the breadwinner in that family.

The R&B singer and Fox ultimately divorced in 2002 and the following year, the latter began dating rapper 50 Cent, who she often referred to as the love of her life. That relationship, however, couldn’t last either and the former wife of Harvest would go on to date Atlanta club promoter Omar “Slim” White.

Christopher Got Help From Vivica Even After The Divorce

Vivica claims she helped her ex-husband amidst the separation. In the last year of their marriage, she was training for Kill Bill Vol 1. Viv says when she returned from training in China for the film, she wanted to end things with Harvest as swiftly and amicably as possible.

The actress told him she had set up a fully furnished apartment and paid the rent for the year. She also put $50,000 in the bank for him. And after that, they were done. Fox declares she didn’t hate the guy but just didn’t want to be his wife anymore.

Where Is He Now? Did He Remarry?

Over the years, Vivica A Fox’s former husband, Christopher Harvest has gotten lost into oblivion beyond recall at least when it comes to media recognition.

Not even Fox has talked about her tall ex-partner in a while. Although he was introduced as a newbie musician, there haven’t been many updates in that facet either.

Likewise, in light of the above fact, not much about his marital life is in a state of recognition. Though, considering he might be within his late ’50s, it’s quite possible that Harvest may have a family of his own.

What Is Christopher Harvest’s Networth?

Much like his current whereabouts, the net worth of Vivica’s forgotten husband is also an unavailing enigma. The answer to the question regarding his fortune is a pitch-black tunnel with no light at the end; again thanks to his utterly undocumented life post the separation with Fox.

People though can at least bet he has long picked himself up and is possibly making a living on his own. It sure will be a surprise if Chris turns out to be a secret millionaire guy; but for now, the probability that he’s living an ordinary life with just a salary or through some kind of turnover seems more plausible.