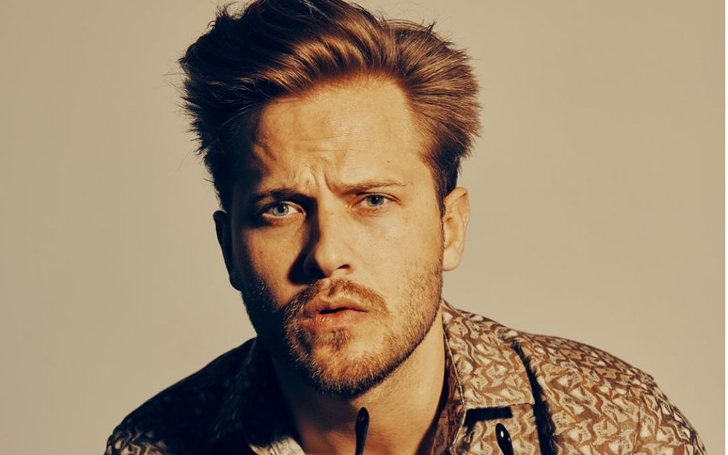 Wyatt Nash is an American television personality and actor famous as a contestant on the 22nd season of the American competitive reality TV series Survivor. He was placed in the seventh position in the show. Later, he shifted his career to mainstream acting and first earned popularity from series like Pretty Little Liars and Riverdale.

Coming up to 2022, Wyatt is already a married man. He tied the knot 5 years back in 2017 and went to the level of lifetime commitment with his wife. Well, then who is his lucky wife? Does he share any children with the lady of his life?

To get to know everything about Riverdale actor Wyatt Nash, read the article till the end. We will include every detail on Wyatt including his age, wife, net worth, his TV and movies, and many more.

In 2022, Wyatt is 34 years of age. He was born Matthew Wyatt Elrod on October 2, 1988, in Nashville, Tennessee, United States, to father Jason Nash and mother Marney Hochman. He grew up in his hometown in an upper-middle-class family of doctors along with his two siblings, a sister, Charley Nash, and a brother.

As for education, he majored in biology and chemistry in college in his hometown. Being born to a family related to the medical field, Wyatt was also raised with the expectation that he will follow in the family’s footsteps and pursue his career in medicine and so he tried too. He initially began his career as a surgical technologist in a local hospital which he quit later.

Similarly, talking about his nationality, he holds American Citizenship and belongs to the white ethnicity. Nash has a birth sign Libra. Moreover, the actor believes in religion and has a strong faith in Christianity.

Wyatt’s Is Named After His Birth City

As we said earlier, Wyatt’s birth name is Matthew Wyatt Elrod. Wyatt Nash is his stage name which he adopted following his appearance on an American reality TV show Survivor: Redemption Island.

Thus,  Wyatt is his middle name and he took Nash from his City name Nashville.

Wyatt Nash Started As A Contestant In The Reality Show Survivor

Nash firstly appeared on television after he took part in Survivor: Redemption Island, a CBS reality show premiered on February 16, 2011. He was one among 16 contestants. He initially was a member of the Ometepe tribe in which his tribe mate was Boston Rob Mariano. In Ometepe, he was playing a good game but due to his closeness with the rival tribe Zapetra’s members, his own alliance went against him and he was voted out.

Then, he was sent to Redemption Island and after defeating six consecutive opponents, he was able to return back to his game on Day 19 and joined the Murlonio tribe. After a while, he again reached Redemption Island. After that, by losing the game in the final duel on Day 36, he finished his journey in the show taking seventh place. Even though he couldn’t become the survivor of the 22nd season, his presence in Survivor make him a way into the American Entertainment Industry.

Wyatt Refused To Be A Part Of Survivor Again: What Was The Reason?

Later in the 26th season of Survivor, in Survivor: Caramoan, he was offered to be a part of the show. But, Wyatt simply declined the proposal of the Survivor team. When he was asked about the reason of not rejoining the show in one interview, he simply said,

No, haha. Survivor is an incredible show and I am forever grateful for my time on it. It was also easily the most difficult thing I’ve ever done. They actually asked me a few times after the fact, but my eyes have been set on other goals.

Actually, his goal was always to pursue a career in acting. He further stated,

I had already decided that I wanted to act before Survivor. I worried a lot early on how it would affect my burgeoning acting career. I wanted to be taken seriously as an actor. That is the reason I wanted to distance myself from the show after it was over.

Wyatt Nash Is An Actor: His Movies And TV Shows

Soon after the end of his journey in the reality show, Matthew played the character Cameron in the dram titled Hollywood Heights. Following his first role, he was seen in the short film Wages and went on to appear as a guest in the TV show 1600 Penn, and the mystery drama series Mistresses as a Hot Naked Guy.

Further, in 2013, Wyatt played the character Nigel wright in the teen drama Pretty Little Liars (PLL). PLL went on to become one of the most acclaimed series, both critically and commercially, from which Nash got noticed among the wider audiences. After that, he did numerous other TV series like Rake, Petals on the Wind, Dr. Ken, Ford v Ferrari, and many more.

In his 11 years of TV career, he did 3 Hallmark movies including The Bridge and The Bridge 2 in which he portrayed the character Ryan. Also, he did another Hallmark TV movie Like Cats and Dogs. From 2019 to 2022, he has been involved in a supernatural series Riverdale in which he played the role of Charles Smith.

Wyatt Nash Is A Married Man: Who Is His Wife?

The Riverdale actor, Wyatt Nash is married to his wife Aubrey Swander who is an artist by profession. Further, she is also a professional singer. The couple has reportedly been in a relationship since the end of 2013 and after dating for nearly 4 years, they eventually tied the knot on 16 September 2017.

Regarding his personal life, Wyatt acts a little bit secretive as he has rarely shared his wife on his Instagram however, once on the occasion of one year marriage anniversary, he shared a post with his wife. He captioned,

A year ago today we promised to dance together for the rest of our lives. What an adventure the past year has been, and I look forward to many more to come. I love you.

Not only social media handles but they often make appearances in the media with beautiful smiles and hand-in-hand gestures. As of 2022, Wyatt and Aubrey are in a marital relationship for 5 years and are apparently living a beautiful relationship.

The answer is No. Till today, Wyatt does not have his own children. However, we know for a fact that he is very fond of kids. He is often seen holding a baby on his Instagram posts who reportedly is his niece.

It looks like, he is focusing more on his career before he and his spouse decide to welcome their kid together. His fans must be eagerly waiting for the day.

If you go through his social handle, you get to often see his picture with a cat. Actually, when he moved to Los Angeles for his acting career, he adopted a cat & since then, they are together. Moreover, he is quite fond of other animals too.

He also admires those who take part in animal adoption which is proved by the caption that he posted on December 6, 2018. It said,

Moreover, he is on Facebook that goes by his name Wyatt Nash with 2.7k followers.

As per Celebrity Net Worth, he has a net worth of $2 million. Wyatt has been continuously doing several series since 2011. So, his major source of income is his career in the American Entertainment Industry.

Where Is Jolene Blalock Now? Why Did She Quit Acting? Husband?