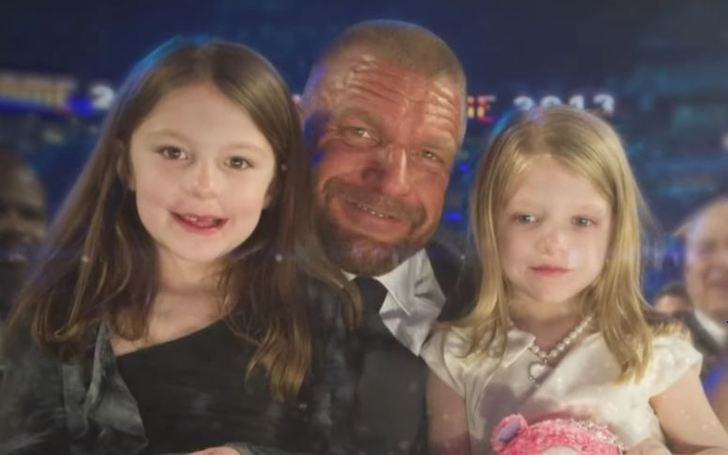 Aurora Rose Levesque is the daughter of WWE superstar couple Tripple H and Stephanie McMahon. She is the oldest among the 3 children in the Levesque family. Paul and Stephanie’s children are beginning to approach the age where they may get involved in the WWE.

And Aurora is well en route to fulfilling that prophecy. She very much could be the third-generation wrestler on WWE’s roster in the days to come. In the meantime, know all about the first child of Triple H and his wife, the villain of the WWE, Stephanie McMahon.

She weighed 8lbs, 7oz at the time of her birth. Her grandfather, Vince McMahon announced the news of Aurora’s arrival on-air during Monday Night RAW. From her mother’s side, she is of Irish descent. Her great maternal grandfather was promoter Roderick James “Jess” McMahon whose parents were Irish immigrants from County Galway.

On the other hand, Aurora holds French-Canadian roots from her father, Paul Levesque.

Her mother, Stephanie did not take a leave of absence during this time, continuing to work with the WWE while she was pregnant with Aurora.

Her sisters, Murphy Claire Levesque, and Vaughn Evelyn Levesque were respectively born on July 28th, 2008, and on August 24th, 2010.

Although not yet into wrestling professionally, Stephanie has said her youngest daughter Vaughn also aspires to be in the wrestling ring one day.

In September 2016, Vince’s daughter stated she has had dummy matches with Vaughn at home. Aurora’s mother also said how Vaughn made her announce her entrance to Katy Perry’s song, Rise.

While talking with The Miami Herald, Stephanie said that she has had to raise her three daughters knowing that they will likely be bullied because their parents are television personalities.

The mother of three said life is going to be a little different for her kids given that their parents are on TV, and it’s something that she, herself lived through and grew up with as well. Stephanie added bullying happens, no matter who you are. She said her children are a little more on the radar because they are children of celebrities.

Aurora Is Already Training To Become A Professional Wrestler

During an interview back in 2019, Triple H’s longtime spouse, Stephanie confirmed that at just 13 years old, Aurora had already started training to follow in her parent’s footsteps.

When Fox’s First Thing First asked if Stephanie would encourage her daughters for WWE, Mrs. Levesque answered that her eldest daughter, Aurora, was already preparing her way to become a professional wrestler. Paul’s spouse also said Aurora has really been bit by the bug.

Aurora has been briefly under the tutelage of Natalya, Ronda Rousey, and Charlotte (Flair). According to ESPN, her mother revealed her heart is set on wanting to become the women’s champ. Stephanie is also thankful that Aurora grew up with a powerful role model, Linda McMohan, her mother who also served as the CEO of WWE. Mrs. Levesque said she wants her daughters to explore boundless opportunities, believe in themselves, and work hard.

Her Parents Are Global Superstar; Their Relationship

Aurora’s parents have WWE to thank for bringing them together and ultimately making them the epitome of the couple’s goals. It was all in the WWE that Paul and Stephanie developed their romance, broke up, patched up, married, started a family, and gained worldwide fame.

Years after they “married” on screen in a Las Vegas wedding in late 1999, Aurora’s folks wed off-screen on 5 October 2003. Earlier, the same year, Paul had asked Stephanie to marry him on Valentine’s Day.

In an interview, Stephanie revealed it was not ‘the love at first sight but the chemistry on the spot.’

Fast forward to the second decade of the 21st century and Aurora’s parents have been significantly successful in taking WWE’s stardom to next level with both of them holding integral positions at the franchise.

Her mother is the chief brand officer of WWE and appears as an authority figure on the Raw, NXT, and SmackDown brands. Aurora’s father, the famous Triple-H, is the Executive Vice President of Global Talent Strategy Development and COO for WWE. Levesque is also the founder and executive producer of NXT.

In 2020, Aurora’s WWE champion father revealed his notorious father-in-law, Vince McMahon made it as uncomfortable for him as possible before he married Stephanie.

He said Vince made it as uncomfortable for him as humanly possible just because he thought it was funny. Aurora’s dad stated there are so many humorous moments in all of that, and they were all wonderful.