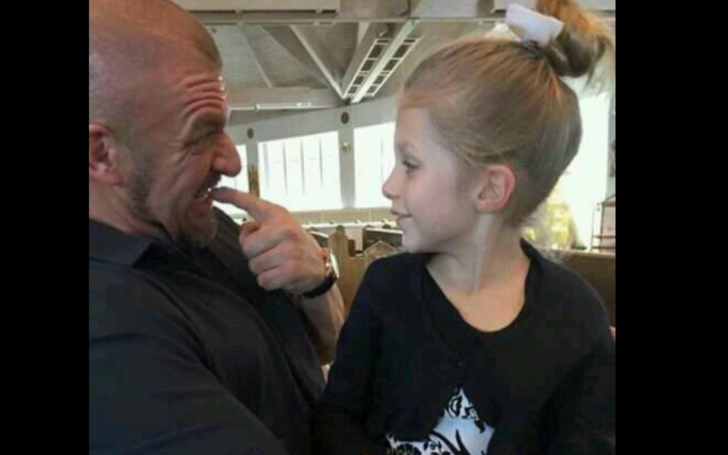 Murphy Claire Levesque is the daughter of WWE superstar couple Tripple H and Stephanie McMahon. She is the middle child of the 3 children in the Levesque family. Fans have already considered Paul and Stephanie’s children among the fifth generation WWE star.

While Murphy’s eldest sister is already into the family business training with the WWE superstars and whatnot. But about Murphy herself? Is she into the WWE like her parents and sisters? Or has she already thought of a career?

Know all these along with some other facts about Murphy Claire in the writings below.

Murphy Claire Levesque was born on Monday, 28 July 2008 in Greenwich, Connecticut. Claire weighed 8 lbs, 12 oz. Her mom, Stephanie was then 31 while her father, Triple H was 39.

Interestingly, her father and her eldest sister were also born in July. Murphy’s birthday comes after her big sister and her father’s birth anniversary; Aurora’s on 24th and Triple-H’s on 27th. July is a pretty big deal for the Levesque family.

From her mother’s side, Claire is of Irish descent. Her great maternal grandfather, Roderick James “Jess” McMahon was a promoter. His parents were Irish immigrants from County Galway.

On the other hand, the youngest daughter of Stephanie McMohan holds French-Canadian roots from her father, Paul Levesque.

While not serious as Aurora, Stephanie has said her youngest daughter, Vaughn also aspires to be in the wrestling ring one day.

In September 2016, the chief brand officer of WWE stated she has had dummy matches with Vaughn at home. Murphy’s mother also described the scenario where Vaughn made her announce her entrance to Katy Perry’s song, Rise.

While interviewing for The Miami Herald, McMahon said she has had to raise her three daughters wondering if they will likely be bullied because their parents are television personalities.

The WWE authority believes life is going to be a little different for her kids given that their parents are on TV. The mother of three added it’s something that she, herself lived through and grew up with as well.

Stephanie said bullying happens, no matter who you are. She said her children, however, are a little more in the spotlight because they are children of celebrities.

Her Eldest Sister, Aurora Is Already Training To Become A Professional Wrestler

When Fox’s First Thing First questioned if Stephanie would encourage her daughters for WWE, Mrs. Levesque answered that her eldest daughter, Aurora, is already gearing up to become a professional wrestler. The 44-year-old also said Aurora has really been bit by the bug.

Murph’s sister, Aurora has been briefly under the tutelage of Natalya, Ronda Rousey, and Charlotte (Flair). To ESPN, Stephanie said her daughter’s heart is set on wanting to become the women’s champ.

The promoter is also thankful that Aurora grew up with a powerful role model, Linda McMohan, her mother and Murphy’s grandmother, also the former CEO of WWE.

Mrs. Levesque said she wants her daughters to work hard, explore opportunities, and believe in themselves.

Claire’s parents’ relationship began in WWE and it was the very verse that they went on to have a strong bond that ultimately defined them as a couple’s goal.

McMahon and Levesque have WWE to thank for bringing them together and ultimately making each of them global superstars. It was all in the wrestling that Murph’s parents sparked the romance, broke up, patched up, married, started a family, and gained worldwide fame.

While their on-screen relationship was no short of drama; things weren’t that dramatic off the ring.

McMahon and her longtime husband married on TV in Las Vegas in late 1999. Their actual wedding, however, took place on 5 October 2003. Murphy’s father, The Triple-H had asked Stephanie to marry him on Valentine’s Day.

In an interview, Mrs. Levesque revealed it was not ‘the love at first sight but the chemistry was on the spot.’

Fast forward to the present and the couple has been significantly successful in taking WWE’s popularity to next level. Both the husband and the wife hold integral positions at the franchise.

Murph’s mother is the chief brand officer of WWE and serves as an authority figure on the Raw, NXT, and SmackDown brands. Her father, Leveque is the Executive Vice President of Global Talent Strategy Development and COO for WWE. The former WWE champion is also the founder and executive producer of NXT.

Claire had an opportunity to visit the White House in 2017. She along with her parents, grandfather, Vince, and her sisters met former US president, Donald Trump and had a picture with him in the oval office.

In the picture, Murph and her sister are seen holding up the famous imaging of Donald Trump shaving their granddad, Vince McMahon’s head at WrestleMania 23.