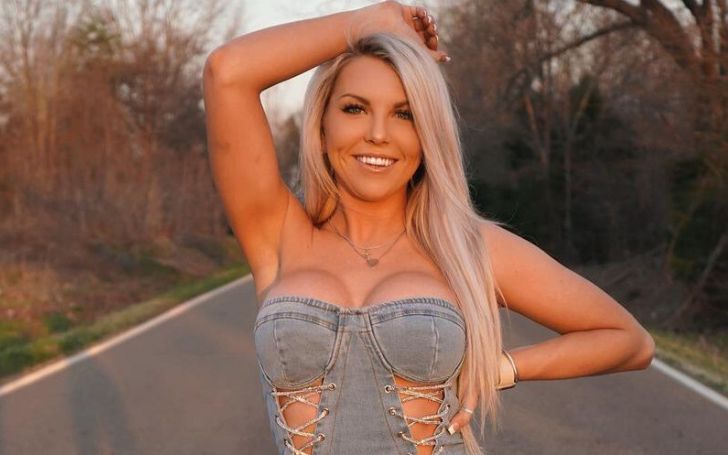 Sophie Swaney is an American social media influencer and adventurer. She has amassed millions of followers across different social media platforms where she endorses several brands. She initially gained attention with her posts about guns, trucks, and other outdoor adventures.

Besides, Swaney also runs her own website where she shares exclusive content with her fans only. We can see her sharing bold content on her social sites while she time and again mentions she shares more private and unseen photos on her website.

Lately, Sophie Swaney was in the news because of her arrest over DUI and two more offenses. So, what actually happened with her? What is she doing nowadays? Let’s explore all these things here, including all the other details about her early life, family, and relationships.

Swaney was born Sophie Phelps Swaney to her parents Randall Swaney and Grace Swaney in Eads, Tennessee on September 7, 1994. She is 27 years old as of 2022. The Instagram influencer’s father is the owner of Marshall Steakhouse, however, details about her mother are not available as of yet.

As a matter of fact, Sophie’s mother stays away from the limelight and isn’t active on social media publicly while her father, Randall is quite active on Facebook where he frequently shares posts. Sophie grew up in Arlington, Tennessee with her sisters. Talking about her education, Sophie completed her high school education at Houston High School. Afterward, she attended the University of Memphis, however, it’s not clear if she graduated from there or not.

She Has Four Sisters, Including One Half-Sister

Sophie Swaney has three sisters and one half-sister. Her three sisters Natalie, Sara, and Jorja are older than her while her half-sister, Harper Swaney is her younger. Two of her older sisters, Natalie and Sara are happily married with children while her sister Jorja is not married and currently pursues her career in Dallas, Texas.

On the other hand, Sophie’s half-sister, Harper is just 9 years old (born October 8, 2012) and she is attending her primary school. Harper was born from her father, Randall’s marriage to Lori Burks Swaney. The husband and wife have been leading a happily married life since March 31, 2011.

Sophie’s Grandmother Passed Away in 2019

Sophie is pretty close to her family members from her siblings to her stepmom. Likewise, she shared a special bond with her grandmother, Lois Swaney Shipp who sadly passed away on January 9, 2019.  Sophie’s dad, Randall took to Facebook to announce the news of her passing.

Days later, Randal again shared a post featuring a handful of photos of his mother where he also thanked all the people for their prayers and messages following her death. They hosted her funeral on 12th January.

Who is Sophie Swaney’s Boyfriend in 2022? Her Relationship Status

Sophie is a social media star and being a social media icon, she shares a lot of things about her life. However, she has always refrained from sharing her love life with her fans. Nevertheless, we came to know that she had been dating a guy named Johnny Justice for some years until 2021. She used to refer to her boyfriend Austin. She hasn’t opened up much about her relationship with Justice, however, it appears they started dating back in the early 2010s.

In a Facebook post she shared in November 2021, she mentioned that she and Justice got their first dog together in 2014 and named the dog Bentley. Meanwhile, it is unclear if the pair are together in 2022. Justice had suffered a severe brain injury in an accident in May 2021. The socialite didn’t give any update on her beau’s condition.

The 27-year-old outdoor brand influencer was arrested and charged with DUI and two other offenses in May 2021. She was reportedly charged with possession or casual exchange, driving under the influence of alcohol, and possession of a handgun.

As per the court report, she was arrested on May 1. As it happened, Sophie and her boyfriend, Justice got into a verbal argument over her previous photoshoot during which Justice got up from the passenger window and fell on his head sustaining a severe brain injury. Metro Nashville police responded to an emergency call about an accident with an injury and took Justice to a local hospital.

During the investigation, Sophie told officers she had drunk a Moscow mule and a Michelob beer earlier. They also found a Glock 43, and a small amount of marijuana in the vehicle which Swaney acknowledged she smoked occasionally.

Later on, Sophie took to her social media to reveal her boyfriend’s condition. She wrote in the story that she is too secretive when it comes to her personal life, however, this time, she wanted her fans to know what she had been going through. Swaney revealed Austin was in the trauma department of a local hospital.

Talking about the case, Swaney is currently out on bail; she paid a bond of $5000 and her next court appearance is scheduled for December 15, 2022.

Sophie Swaney Career – What Does She Do Currently?

As we mentioned earlier Sophie is a full-time social media influencer, so she basically does photoshoots for her social media content. She put her first step in her career in her early 20s after moving to North Carolina. After relocating there, she started sharing photos of her fishing and hunting which started gaining the attention of thousands of people.

At the same time, Sophie got a chance to model for local brands. Later on, she went on to work for some renowned brands like Hostile Wheels, Tate Bros Tires, Yeehaw Cowboy, Freedom Holster, and Rein Lashes among others.

Besides, Sophie also runs her own website where she shares exclusive content with her fans for which fans need to have a paid subscription.

Apart from that, Sophie enjoys adventures and hunting. In fact, she has a degree in gunsmithing and she loves going on hunting frequently. She has also shared a number of posts showing her hunts.

Her Engagement in Social Media

It’s obvious that Swaney is a presence on many social sites. She has more than a million followers on social media platforms. Sophie boasts close to 120k followers on Instagram, 620k on Facebook, and 87k on Twitter as of June 2022.

Besides, Sophie is also active on TikTok where she has 541k followers and more than 6 million likes. Swaney shares her outdoor adventures, her time with family, friends, and other interesting stuff from her day-to-day life.

She is a Dog Person

As we go through her social media posts, we came to know that Sophie Swaney is a big dog lover. In fact, her family has always been welcoming to dogs. Swaney got to play with a lot of dogs while she grew up, and even after she became an adult, she has been adopting many dogs.

Especially, Sophie has shown her interest in labradors & she has even talked about adopting a number of labradors in her social media posts.

Swaney has earned a good sum of money from her career as a social media influencer. She has been active in this field for some years now. Although Swaney’s exact net worth is yet to be documented, we can speculate it falls in hundreds of thousands of dollars if not in millions.