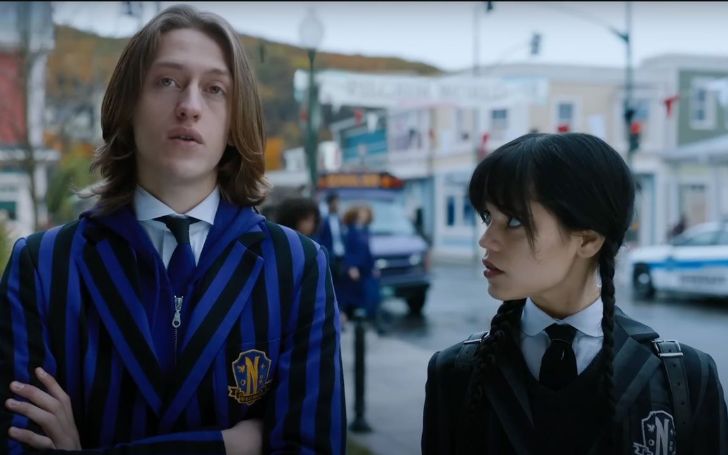 Jenna Ortega and Percy Hynes-White, two of the hit casts from the recent Netflix hit series Wednesday, are the names that the people who follow showbiz have been constantly throwing into the much popular possibility aspect which is dating.

Wednesday and even each of the actor’s fans have been bynaming Ortega and Hynes-White as the new couple since their series’ premiere in Nov 2022. The costars both have agreed to have a colorful time by working alongside each other on Wednesday. Off the camera, they also look very much comfortable with each other.

Keep reading to figure out if Jenna and Percy are actually in a relationship or merely the people being victimized by the wishful thinking of some watchful fans. On the way, also know what stories the love aspects of Ortega have to tell including her boyfriends and more.

The speculation understandably stems from the fact that Hynes White played Ortega’s on-screen romantic interest. The series foreshadowing their characters’ romance was very much convincing and also worthy of prompting a handful of theories regarding the possibility of Ortega and Hynes-White being a real-life couple.

Furthermore in an interview, Hynes-White admitted to loving working with Ortega in addition to saying that he and the five-foot-one-inch tall actress had a fun time together on Wednesday set.

At some points, there were also those pictures that only added seriousness to the hearsay.

And honestly, no one should be at fault for shipping these co-stars into a romantic ambiance. Their demeanor in some social media posts does compel you to think that there indeed may be something getting serious behind the scenes. For instance not so long ago, a collage emerged that showcased multitude of pictures where Ortega and Hynes-White were being cozy by each other’s sides. In addition, there are several TikTok shorts where the alleged couple has followed the aforesaid gest.

So Are Ortega And Hynes-White Really Dating?

However, while it may be disappointing for many, Ortega and Percy are not dating. Unfortunately, their on-screen chemistry in no way looks correspondent to their real-life bond. If anything, they appear to be just good friends. Furthermore neither the stars have commented on what really the issue is nor do both of them appear to be the ones who will personally have their say on these sorts of subjects, any time soon.

They both appear to be single right now. All in all, neither of them seems to be off the market.

The probability of Ortega and Hynes-White brewing a love story, however, is also not out of the realm thing. The two somehow do not look like your normal could-be-dating scenario. Percy and Jenna-thing might last a bit longer as they are reuniting for an upcoming young adult romantic drama comedy film, titled, Winter Spring Summer, or Fall. The movie follows two teenagers falling in love named Remi and Barnes.

Nonetheless, it’s also best not to take others’ word for it; these sorts of alleged flings surprisingly yet expectedly have also turned into a reality. In most cases, it was only a matter of time.

Jenna Ever Past Boyfriends

With Asher, it started in October 2018 when Ortega matched Angel’s Pete Davidson Halloween costume with her Ariana Grande. What’s more, Asher and Ortega also walked a few red carpets at the time and had even attended each other’s birthdays but it never came to light if they were really having a relationship.

On the other hand, Jacob’s chapter in Ortega happened some months before Angel. The Coachella Valley-born actress appeared in Sartorius’s music video for one of his songs, Chapstick in Oct 2017. During the hearsay, Jacob however said that he and Ortega were only good friends. There also were likewise speculations regarding Ortega and her Stuck In The Middle co-star, Isaak Presley.

In the case of the aforesaid names, Ortega, however, has somewhat broken her silence.

Whilst giving an interview on a podcast episode of Just Between Us in Feb 2019, the American actress of Puerto Rican and Mexican descent said all the dating rumors she had heard until then were false.

Jenna revealed she was never involved with any of the alleged boys. Answering what was the craziest thing she had seen online about herself, the 20 years old, at the time, said,

Probably relationships. According to the internet, I dated like six guys, [but I] dated none of them.

That said it now sounds like, Ortega getting linked to her male costars or just some fellow actors, is more like a norm.

Who Are Wednesday Cast Dating In Real Life? List of Their Boyfriends