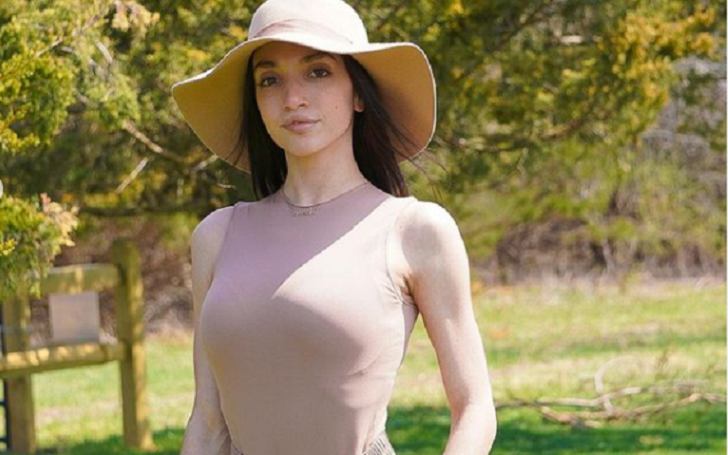 Julia Macchio is an American actress known for her performance in Across Grace Alley, Wholly Broken, and Girl Most Likely to name a few. Besides being an actress, Julia is most famously known as the daughter of well-renowned actor Ralph Macchio and his wife Phyllis Macchio (nee Fierro).

Her father Ralph is mostly known for playing the iconic character of Daniel LaRusso in three Karate Kid films. Besides Julia, her parents have another child, a son Daniel Macchio. So, how is Julia Macchio’s relationship with her parents and sibling?

Besides, let us try to find out if Julia Macchio is dating a boyfriend. Here’s everything about Julia Macchio’s life. Take a look!

Who Are Julia Macchio Parents? Her Family Details and Early Life

Macchio was born Julia R Macchio on May 20, 1992, to father Ralph Macchio and mother Phyllis Fierro. She is the firstborn child of the famous actor Ralph and nurse mother Phyllis. Talking about her parents’ relationship, they were introduced by Ralph’s grandmother when Ralph was 15 years old.

The lovebirds attended the same college and they started their romantic relationship during the same time. After years of courtship, Ralph and Phyllis married on April 5, 1987, when the Cobra Kai actor was 25.

Talking more about her family’s background, Julia’s paternal grandparents are Rosalie Macchio (née DeSantis) and Ralph George Macchio; her grandfather had a ranch in New York. Meanwhile, there is no info about Julia’s maternal grandparents as her mother Phyllis has kept the details a secret.

Julia also has one sibling, a younger brother, Daniel Macchio who is 4 years her junior (born 1996). By profession, her younger bro is a film score composer.

What is Her Nationality?

Julia holds American nationality and as far as her ethnicity is concerned, the star kid belongs to a mixed ethnic background. Her father is of Italian and Greek descent while her mother is Caucasian White.

Julia Macchio Relationship with Her Parents and Siblings

Julia Macchio has time and again shared her parents’ old photos saying how lucky she is to be their child. Moreover, she is also very close to her brother. They can be seen spending their happy time together on their social media posts. We can also see many of their old photos on their socials.

At one instance, she said her brother Daniel has been her best friend since the day he was born. Being his sister is the greatest joy of her life, Julia wrote in the caption where she wished her brother his birthday on October 24, 2020. Here is the post.

Back in September 2020, Julia with her family enjoyed watching the sunrise “at the crack of dawn” which she shared on her Instagram as well. “We were absolutely exhausted (hello puffy morning eyes!) but it was worth every second,” wrote Julia alongside the post.

Not only Julia, but her brother Daniel has also expressed his love for his sister and parents on his socials. Daniel doesn’t miss wishing his family on their special days and festivals.

As we mentioned earlier, Julia is a family person. She not only is close to her immediate family, but her bonding with her uncle and cousins is pretty strong as well. And she was shattered into pieces after she lost her cousin, Gino Macchio on May 4, 2018, in a terrific car crash.

Gino, then 25, was on a motorcycle when it collided with a 2006 Honda in Commack on April 29 night. Then Gino was taken to Southside Hospital in Bay Shore with serious injuries where he passed away a few days later, on May 4th.

The rising actress mourned her cousin’s death in a lengthy Instagram message. In the message, she expressed her great sorrow.

Even after his demise, Julia keeps mentioning his name on her social media posts, and she also misses him on his birthdays and death anniversaries.

Where did Julia Macchio go to college? Her Training

Julia has been an enthusiastic personality since her early childhood days. She was always interested in performing arts and has also trained in dancing, theater, singing, and more. Besides, she also pursued arts for her academics. Julia Macchio graduated with a Bachelor of Arts in Dance from Hofstra University in May 2014.

Talking about her artistic training, Macchio has been trained in acting, dancing, and singing from the age of five. According to her LinkedIn bio, Julia trained dancing at the Long Island Academy of Dance for 14 years.

With years of training and studies, Julia is now eligible to teach different styles of dance such as ballet, jazz, modern, tap, contemporary, musical theater, and hip hop.

What does Julia Macchio do for a living? Has worked as an Actress in a few Projects

Alike her father, Macchio is also eyeing a successful career in Hollywood and she has already started her journey. Being in her late 20s, Julia has worked in a handful of acting projects while she has also been performing and teaching dance for several years.

Her first acting role came in the movie Girl Most Likely in 2013, in which she played the role of Lucy. According to her LinkedIn profile, she auditioned for the role in August 2011. The Sheri Springer-directed movie also stars Kristen Wiig, Matt Dillon, Darren Criss, and Annette Bening.

Subsequently, Julia made her appearance as a voice student in a short Across Grace Alley. Coming to the year 2018, Macchio appeared as Tanner in a TV movie Wholly Broken. Afterward, she played Caitlin in Stella’s Last Weekend the same year.

Besides her growing acting career, Julia is also a dance teacher. She has been working as a dance teacher at Long Island Academy of Dance since May 2014. The academy was the same where she trained dancing. There, she teaches various turn, stretch, leap intermediate-advanced classes.

Is Julia Macchio Dating Anyone? Who is Her Boyfriend?

Julia describes herself as an “extremely outgoing person” and she is indeed the person she describes. She doesn’t shy away from sharing her personal details with her fans. So, we believe, Julia will share her love life with the public when she will have a boyfriend. But, as of now, she doesn’t appear to be dating anyone. Besides, several online tabloids have also mentioned her to be single in 2021.

Talking about her past relationships, she was reportedly in a relationship with a guy named Samuel Patrick Chu. However, she hasn’t addressed the rumor if he was her boyfriend or not.

Her once reported beau Patrick is a Canadian actor famous for Museum: Battle of the Smithsonian, Diary of a Wimpy Kid, and Martian Child. The pair reportedly dated from 2006 to 2008, but again, the fact is yet to be verified.

Julia has maintained her fitness well. She is 5 ft 2 inches tall and weighs 108 lbs as of 2021. Besides, she has maintained an attractive body figure that measures 35-24-35 inches. Further, Julia has dark brown-colored hair and brown eyes.

What About Her Net Worth?

Well, Julia has yet to achieve more in her acting career, however, with the little work she has done so far, she must have earned a hefty sum of money. The actress has not talked about her earnings and fortune publicly. But, seeing her career map, we can estimate her net worth certainly lies in hundreds of thousands of dollars.

On the other hand, her father, who has had a prolific career in acting has earned a handsome sum of money. His estimated net worth is around $4 million. With her father being a millionaire, we can safely say Julia had a cheerful and lavish childhood.