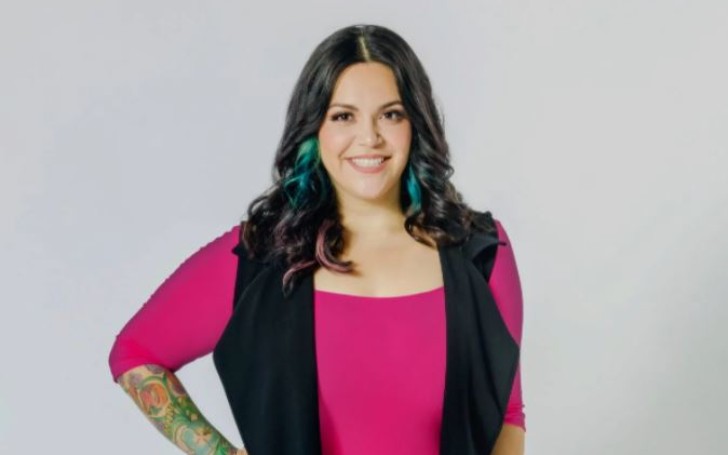 Jacqie Campos is the youngest daughter of Jenni Rivera and Jose Trinidad Marin. She came to media prominence because of her late mom, Jenni, who was one of the most prolific Mexican singers.

The star kid is relishing her personal life with a family of her own. Although she and her husband once decided to go their separate ways, they immediately got back together and now living a beautiful life.

Today let’s find out what is Jacqie up to these days? Has she walked the same path as her late mother Jenni or doing something else? Let’s get right into it!

Who is Jacqie Campos?

Jacqueline Melina Marin was born on November 2oth, 1989, in Long Beach, California. She is the youngest daughter of the former pair Jenni River and Jose Marin. Her parents were married from 1984 to 1992.

Jacqie belongs to the Mexican ethnicity and has American nationality. Jacqie, aka Chunka, spent her childhood in the Long Beach area of California. She also studied at a local high school in Long Beach California. Other than her high school, there’s no information on whether she has pursued a college degree or not.

In addition to her, Jenni and Jose are also parents to two more kids. They welcomed their oldest child Chiquis Rivera on June 26, 1985, and youngest child Michael Marin on September 11, 1991. All three of the Marin siblings were born in Long Beach.

Jacqie and her siblings share a cordial bond with each other. She often shares pictures with her siblings which showcase their unbreakable relationship. When the three of them lost their mom back in 2012, they remained strongly bonded during the difficult time.

She has two half-siblings from her mom’s other marriages

After her parents divorced, her mother married two more times. She first tied the knot with Juan Manuel Lopez Pardo in 1997. They remained married from 1997 to 2003 and share two children, Jenicka Lopez, born in 1997, and Johnny Lopez, born in 2001. Jacqie’s step-dad Juan passed away at the age of 37 in 2009.

Despite the fact that they are half-siblings, all five of Jenni Rivera’s children share a beautiful relationship with each other. Jacqie often shares pictures with them on her social media account. Goes on to show that the Rivera siblings know family always comes first.

Jacqie Campos once confessed to drug use

When you are a star kid, a lot of eyes will be on you. Likewise, ever since her mom Jenni made it big in the Latin music industry, her kids became a center of attention.

Now, this center of attention thing gives out more harm than anything else. Back in 2013, Jacqie released a line of t-shirts designed by herself. At the time she had joined hands with Christian brands NOTW.

When Campos released the line of t-shirts she also shared a heartfelt message alongside it. In the message, Jacqie opened up about her traumatic past, promiscuous lifestyle, and drug addiction. In a big testimony, she mentioned how she started having a sexual relationship from a young age. Because of this she also became pregnant with her first child at just the young age of 15.

In addition, she also revealed her drug addiction and how her lifestyle took her to places she never imagined. From attending rave parties to indulging in ecstasy, Jacqie did it all.

Nevertheless, Campos maintained that she gave up all of her hedonistic lifestyles upon finding God.

In 2018, Jacqie came out with her dramatic 70-pound weight loss. In one of the episodes of the show, The Riveras, Jacqie mentioned how she shed a staggering 70-pound in order to make her life get back on track.

As for what was the inspiration behind her dramatic transformation, she said,

“What motivated me is my children. I was starting to see that I didn’t have enough energy to be a good mom, and I wanted to be a good example.”

“As you can see in my social media, I’m staying focused. I don’t work out all the time but when I can — and I’m just eating healthy. It actually makes me feel better. I just have more energy now, so I think I’m going to keep doing it.”

Campos started her journey back in October 2016. She started waking up at 5: 30 in the morning, do her cardio and said goodbye to junk food.

Who is Jacqie Campos’s husband?

Since 2012, she has been married to Michael Campos. The lovebirds exchanged vows on the 10th of November. The pair had met a few years before their marriage.