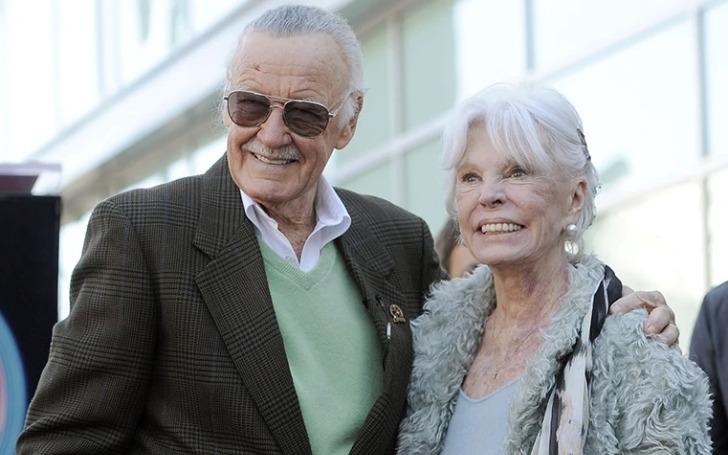 Joan Boocock Lee was a former British-American model and voice actress known for X-men: Apocalypse (2016), Spider-Man: The Animated Series (1994), and Fantastic Four: The Animated Series(1994). Apart from her profession, she is widely known for being the wife of an American comic-book writer, editor, publisher, and producer Stan Lee (aka Stanley Martin Lieber).

Joan’s husband, Stan is a former head of Marvel Comics famous for creating the superhero series ‘The Fantastic Four. Further, he is a co-creator of superheroes like ‘Spider-Man’, ‘The Hulk’, ‘Iron Man, ‘Thor’, and Doctor Strange, for which he collaborated with his colleagues, Jack Kirby and Steve Ditko. Both the couple throughout their life worked in Hollywood, remained married for 69 years, and died at the same age. Isn’t it interesting?

So, today, let’s get to know about Joan’s beautiful relationship with her husband Stan. Besides, this article will explore every unknown detail of Joan Boocock Lee including her early life, first marriage, children, and others.

Stan Lee’s wife, Joan was born to her father Norman Dunton Boocock, and her mother Hannah Clayton on February 5, 1922, in Gosforth, Newcastle, England. At the age of 90, she once remembered her birth story and said,

“I was born in Gosforth, and grew up there and in Fawdon,” she said. “It was about a mile out of town on one of the blue buses. They called us Geordies, or Fighting Northumbrians, because we were the hardest fighters in the war.”

As she said, she spent most of her early life in her hometown and when she was at her 17, World War II started. She was in England till the end of the war. Well, talking about her teenage years amid war, she once stated.

“At the end of the war I looked around and, after all that excitement, England seemed so sad and war-torn,”

After that, she shifted to the United States of America.

Joan Boocock Lee Was A Voice Actress: Her Career Detail

An England-born celebrity spouse Joan started as a voice actress in 1994. She made her debut in voice acting through the third animated TV series Fantastic Four by voicing a reoccurring character. Then, the same year, she voiced a computer in three episodes of the television series Iron Man.

Later, Lee showed up in a documentary With Great Power: The Stan Lee Story, which was about her husband. And her last appearance became the 2016 film X-MEN: Apocalypse. Before coming into the American entertainment Industry, she was a hat model in Britain.

Joan Was Also A Novelist

Apart from doing documentary and voice acting, she was interested in writing as well. Joan wrote her first novel The Pleasure Palace in 1987 which was published at the time. But as per her daughter, she had completed writing three more novels but they are not published yet.

The former British model walked down the aisle with her husband Stan Lee in December 1947 in Reno, California. Before getting married, the couple dated each other for just two weeks, and then Joan get a proposal of marriage from Stan which she happily accepted.

After marriage, the married pair lived in Long Island for 19 years. Then, they shifted to New York and later to Los Angeles. The couple had a great married life and had a very close bonding. Once, in an interview, Stan talked about his relationship with his wife. He told,

My wife and I are really so close.

As per stan, Joan was a perfect wife for him. From the date of their marriage, the duo, Joan and Stan remained married for 69 years. And their separation occurred with the death of Joan Boocock in 2017.

Before meeting a comic writer Lee, Joan was already married to her first husband Sanford Weiss. Her first partner was a US serviceman whom she married after the world war & decided to leave England.

She once told in an interview,

“I felt there was nothing there for me any more, so I decided to marry an American.”

Regarding her first marriage, Joan said that it was her huge mistake. She further explained,

“I had only known him 24 hours when we decided to get married, “I many aspects it was a great marriage, but after living with him a year I was finding him sort of boring…”

She was still married when she met her future husband Stan Lee and after falling in love with Stan, she decided to divorce her first husband. Joan got divorced from her first spouse in December 1947, just an hour before her marriage to her second husband.

Joan Was The Girl That Stan Had Been Drawing For All His Life: Their First Meeting

After 30 years of marriage, both the husband-wife couple opened up about their long marriage and their dating history. Back in 1947, the duo met for the first time. In a meantime, Stan’s cousin had organized a blind date for him and when he went to meet the girl, he instead saw Joan in front of him.

At the first sight, he fell in love with his future wife. He told to People,

” There was one girl I drew”. “One body and face and hair. It was my idea of what a girl should be. The perfect woman,”.

After seeing Joan, he thought it was his fate. Lee further told,

“She was the girl I had been drawing all my life.”

On the other side, Boocock also found Lee thrilling. She said,

He reminded me of that beautiful man, British actor Leslie Howard.”

Soon after, Joan headed to her first husband to get a divorce, and then the rest is known to all of us.

“I was doing the books exactly the way my publisher wanted me to do them, and I wanted to keep my job and earn a living,” he said. “But after a while I really got sick of it and wanted to quit.

“This was when my wife said, ‘Why don’t you do some stories as you would like to do them. The worst that could happen is that he’ll fire you, and you want to quit anyway.’”

And at the end, Joan’s advice really helped her husband to create a great thing in the American Entertainment Industry.

While opening up about their interesting love story and his career as a comic writer, Joan’s husband Lee once shared that he is not bothered to spend much time writing because of his wife. He revealed that it’s due to his wife Joan’s love for home. He said,

She loves things like decorating. She’s the perfect wife for me because I spend so much time writing when I’m home, and I imagine another woman might be saying things like, “How come we never go anywhere? Why don’t we take vacations! You never take me anywhere!”

On this, he added,

“But Joanie, her house is her toy. She plays with the house. She could spend all her time rearranging the furniture,  “She can always keep herself busy, which is wonderful for me, so I don’t feel guilty when I’m in my room writing.”

Joan was a mother of two children named Joan Celia Lee and Jan Lee. Her first daughter Joan Celia was born in April 1950, in New York City. As of 2022, she is 72 years of age. By profession, she is an actress who played in the series No Actor Parking and The Ambulance. Further, Joan’s first-born daughter has also worked as a voice actress in the animated series Iron Man.

Talking about her second child Jan was born in 1953 but sadly died just three days after her birth. Later, the couple also tried for adoption but being an interfaith couple, they faced difficulty. So, they raised their only living child Joan Celia Lee.

Joan Boocock Lee Died At The Age Of 95: What Was The Cause?

On 6 July 2017, Marvel legend wife Joan bid goodbye to the world. After her death, the family spokesperson informed the media and left a statement that said,

“I can confirm the sad news that Joan Lee passed away this morning quietly and surrounded by her family,”

She suffered a stroke-related complication and was admitted to the hospital in Los Angeles, California. At the time of her death, her beloved husband was at her side.