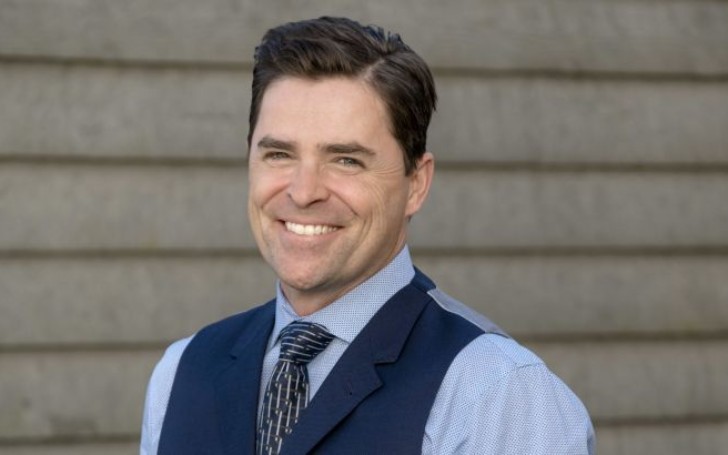 Kavan Smith is known for his role as Rosemary’s husband in When Calls the Heart. His chemistry with Pascale often leads fans to mistake them as real-life spouses.

But in real life, Kavan relishes a beautiful marital life with his wifey of many years. Today let us find out about Kavan Smith’ wife behind the screen and find out more about his marital life.

Is Kavan Smith Married? Who is his wife?

What made fans curious about Smith’s conjugal life is the chemistry he has with, Pascale in the series, When Calls the Heart. The on-screen hubby and wifey are literally the embodiment of marriage goals.

Likewise, you will be surprised to know that Kavan’s relationship with his real-life wife is kinda similar to what we see between Rosemary and Leland.

The 5ft 9in actor is a married man. Just recently, Kavan told Hallmark Channel, he and his life partner are in marital bliss for over 17-years now.

Now, this is one of the most debated topics when it comes to Kavan. Now that we’ve mentioned the 50-year-old actor’s marriage, you must be curious to find out about his wife, right?!

Many tabloids claim his partner in crime is Corinne Clark, a Canadian Casting Director. Although Kavan himself never confirmed about Corinne, the rumors started stemming out after they worked in the movie, Stargate Atlantis.

In the series, Kavan portrayed the character of Major Evan Lorne, whereas, Corinne worked as the casting director.

However, there are certain things pointing out that she is most definitely his partner. Things like Corinne has a Twitter account and she retweets a lot of Kavan’s tweets.

Moreover, in an interview with Hallmark Channel, Kavan mentioned he had known his wife professionally before tying the knot. He also went on to say she is not an actress, and Corinne here is a casting director, not an actress.

All these things definitely add to the fact that she is most probably Kavan’s wife.

Kavan’s Delightful Marriage with spouse: Does the pair share any Children?

Yes, Kavan and his soulmate are proud parents. They share two kids, both of them boys. The actor, just like his wife, has kept the identity of his kids largely to himself.

He has once shared a picture of one of his sons on his Instagram handle. He posted the picture back in June 2016.

Moreover, he once divulged the age of his kids in a December 2017 tweet. At the time, his eldest son was 10-years-old, whereas, the younger, 7-year-old.

The lovebirds after getting engaged exchanged vows at a rather small ceremony. To be honest, small would be an understatement as their matrimonial was way too small.

Kavan mentioned in an interview that in total there were about 34 guests who attended their big day. He also mentioned being a cheap person and cutting off a lot of things from the list.

Take a look at the full interview here!

How did Kavan and his wife meet for the first time?

Kavan once tweeted about how he met his partner for the first time. While calling his wife a Calamity, he said they met when he was doing volunteer work at a treatment center.

He also jested about his wife having a little trouble with cough syrup and huevos rancheros, a traditional Mexican dish.

Kavan Smith Secret to Happy Matrimonial: Often Go Out on Dates with your better half

We all know that behind every successful marriage, there is a lot of commitment and sacrifices. It is a mutual process of giving and take.

Similarly, Kavan too believes in keeping his ego aside and let his wife do whatever she wants. He mentions giving power to your lover means no harm and on the bright side, she will be happy.

Besides, Kavan and his wife love to cook, and whenever they have free time, they will go out for dinner dates. That way, the duo can talk about their life and kinda review their marriage.