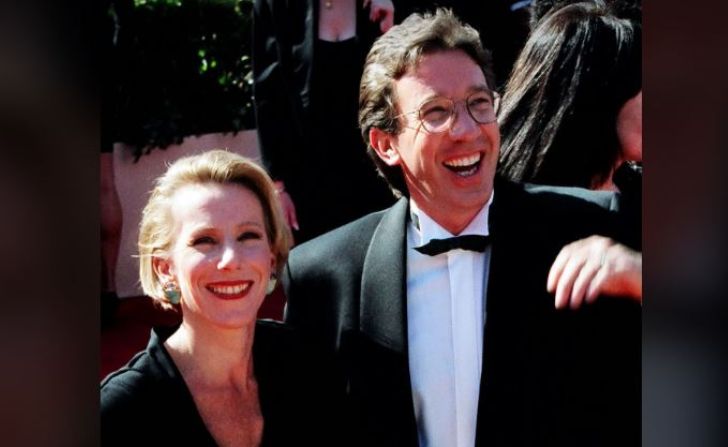 Laura Deibel is a former charity organization founder, and sales manager, also known as the former wife of the Toy Story and The Last Man Standing actor, Tim Allen.

Deibel and Allen were together from the ’80s to the late ’90s between which they also became parents to a daughter. Their relationship to many was seemingly definitive. Laura and the People’s Choice Award winner nonetheless would part their ways owing to several reasons.

Read all about them in the write-up that is to follow. In transit, also know about who Laura Deibel actually was, her parents, how she met Tim, their relationship, her life after the divorce, and others.

Laura Deibel Is The Daughter Of A World War 2 Veteran

Laura who was born on November 12, 1956, is the daughter of Gibert and Annette in Omena, Michigan. Deibel’s late father, Gilbert, who was born in Saginaw, Michigan, served in WW2 in the US Army Air Force Corps as a B24 Bomber Pilot with the 5th Army Air Force in the Western Pacific Theater.

Laura’s father finished his army career as a 1st Lieutenant after which he practiced law in the Saginaw area with the law firm of Cook, Nash, and Deibel.

Deibel’s mother, Annette Deibel once was a director of the Leelanau Conservancy, a non-profit group that worked against the development of the Omena Point area. The Emmy nominee’s ex-wife, Laura is one of the three daughters of her parents Gilbert and Annette. Her sisters are Andrea Muladore, Roxanne Deibel.

She allegedly grew up in Saginaw Michigan.

Deibel and Tim first met in college. The collegemate started dating soon and ultimately got married in the year 1984 and remained in a marital relationship for 15 years before ending their togetherness in 1999. The former couple finalized their divorce four years after their separation.

When together, Laura and her ex-husband, Allen had a daughter, Katherine Allen in 1989.

It was Laura who asked for the divorce; Michigan born filed for legal separation from Allen in 1999 in Los Angeles Superior Court. Deibel cited irreconcilable differences as the ultimate reason.

With the divorce finalization, the former couple got shared custody of their then 13 years old daughter, Katherine.

The Reasons Behind Deibel And Allen’s Separation

One of the alleged reasons for Laura and Tim’s marriage failure was the latter’s busyness and him not giving much time to his family. Allen himself confirmed it to The Detroit News in the late ’90s.

With the magazine, the father of two said, he spent so much of his time on his career that he “let his family slide.” The 3 Geezersactor would allegedly work from Monday to Friday and even on weekends, he would go for drinks with friends. In fact, at the same time, Allen had also developed an alcohol addiction which later made him join rehab.

On the other hand, Deibel also became tied up raising her and Allen’s child as well as maintaining a home life.

What’s more, as per some insiders, Allen, on occasion, also used to drive his ex-wife, Laura crazy. The surreal humorist’s longtime friend and business partner, Rob Cowin, who is also the godfather to his daughter, once revealed Allen would sometime suddenly return home and “drive [Deibel] crazy.”

On the other hand, Deibel who had supported her then-husband through his acting journey went to the backseat once the actor rose to prominence.

Apparently, Allen also cheated on Laura multiple times during their marriage. Not only that, but the former couple’s disagreements on small to big decisions also played role in their separation. For instance, the couple would fight regarding their vacations; where Laura would ask for a Europe trip, Tim used to be adamant that they will visit a Ferrari Factory.

Besides, they would also argue over the issue of having kids; the comedian wanted more but Laura allegedly didn’t. With time, their fight grew more intense and they eventually separated.

In 2011, in a conversation with Parade, Allen confessed he was not connecting [with Laura] and drank too much. In his words,

“I was gone so much in my first marriage, I love the moments when I engage with my youngest daughter now. It’s not my thing to sit on the ground and play tea party, but I’ll do it because it’s a moment that will stick with me forever.”

Allen’s bustle eventually started to lessen after the finale of Home Improvement. However, unfortunately, his marriage with Deibel had already ended by that time.

The couple of Laura Deibel and Tim Allen was one of the fans’ favorites. So, all of their fans were shocked when they came to know that the couple’s marriage had dissolved. Specifically, the fact that Deibel stood by her husband while he served 28 months in prison after being busted with cocaine made their fans believe, the couple was meant to last forever.

Not only the fans but the former couple’s friends and family members were shocked by their decision. Tim’s mother revealed their separation made everyone around them unhappy. Meanwhile, many of Allen’s friends considered the Toy Story actor and Laura were seemingly soulmates.

What Does Deibel Do Nowadays?

Not much about Deibel’s current professional life is self-explanatory. However, back in 1982, she apparently used to be the sales manager for an interior landscape. At the time, her former husband, Allen, was performing at Kutlenios’s club for $50 a show.

Meanwhile, when Deibel was still married to Allen, she used to help him run a charitable foundation that the former couple both founded. She was additionally the CEO of her former husband’s company, Tim Allen Signature Tools.

The Life Of Tim Allen And Laura After The Divorce; Is Deibel Married Now?

Prior to their wedding, Jane and Tim dated for around five years. They tied the knot in a small outdoor ceremony in Grand Lake, Colorado on Oct 7, 2006.

While talking about his second marriage with Hajduk, Laura’s ex-husband said he is a changed man to his current wife than he was to his first wife. And this apparently made his courtship with Jane much better. Allen says he is much more present with Hajduk.

Laura Deibel Current Marital Life; Where Is She Now?

As per her Facebook which was active till Nov. 2018, Laura is a resident of Sherman Oaks, California. Though it now is whoever’s guess where she’s at.

The ambiguousness is also compelling over her marital facets. While Allen, to all intents and purposes, looks happy with his current wife, Jane, it is yet to be known if Deibel has a new husband.

Laura’s former partner, Tim Allen is by all odds one of the richest actors in Hollywood with his net worth. The actor is declaredly sitting somewhere above the $100million mark. That should hardly come as a surprise considering his almost 50 years long career which includes two hit TV shows and an astounding list of box office performing movies.

Even during the late 2010s, Deibel’s ex was raking in more than $4 million a year from ABC’s Last Man Standing. There’s also money coming to the now 69 years old through occasional Disney projects like the Toy Story franchise.

On the other hand, no correlative assertions have ever been brought out in regards to Tim’s first wife, Laura Deibel. Much like her current professional and personal goings-on, the inside out of Deibel’s net worth is also a question open to anyone’s interpretation.