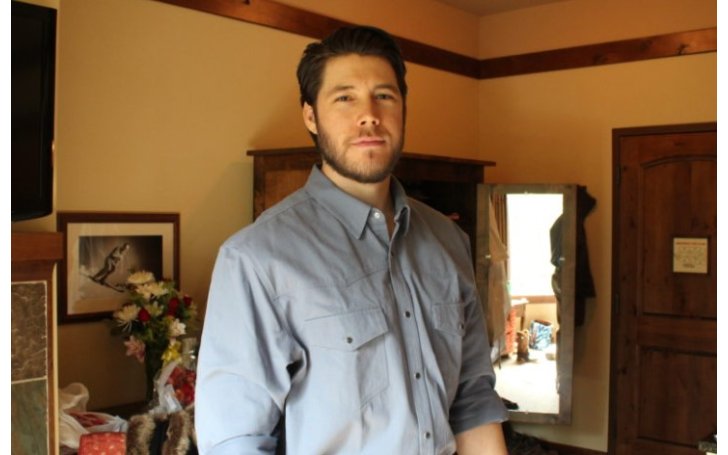 Matthew Rhode is an American voice-over artist who became famous after he married the model, Adrianne Curry. His wife is a renowned model who came to fame after she won the first installment of America’s Next Top Model back in 2003.

The couple has been married for a couple of years now, however, there is not much we know about Adrianne’s husband. The only thing we know about the celebrity husband is that he is a voice-over artist. Still, there are a lot of things that we want to know about him.

Good news folks as we have all the interesting facts you want to know about Matthew Rhode. We will discuss his career, early life, wiki, and net worth!

Matthew Rhode Wiki-Bio: Where is he from?

He was born on April 19, 1982, in Louisville, Kentucky. Though Rhode himself has not mentioned where he is from, we can at least tell he holds American nationality. On the same token, he comes from English ancestry.

As a private person, Matthew rarely ever talks about his family, especially his parents and siblings.

Matthew is a high school graduate, though he has not revealed if he has a college degree or not.

What is Matthew Rhode’s Profession?

As someone, who won the heart of our beloved Adrianne, there is no doubt Rhode has a fruitful career. Well, he is a renowned voice-over artist who has worked on several big projects.

From commercials to movies to network promotions, Matthew has worked in almost every genre. A few brands that he has worked with are Powerade, JC Penney, Progressive Insurance, Miller Lite, and Chevron.

How did Matthew get his big break?

After discovering his interest in voiceovers, he went to New York for an audition. While he was inside the agent’s office, the department’s head overheard his voice from another room and immediately acknowledged his potential.

Soon, he was hired by the agency and he then started working for various brands including Progressive Insurance, Miller Lite, and Chevron.

He moved to Los Angeles after figuring out that he might be able to further increase his career by moving to the west side. There he got a lot of offers in the broadcasting field and also received numerous sponsorship deals.

Aside from his passion for sound recording, he is an avid video game player. But wait, there’s more, not only does Matthew plays video games for fun, but he is also a Twitch streamer.

On Twitch, he goes by his moniker Ducksauce. Moreover, he also has a substantial amount of followers. However, right after he married Adrianne, he went on a hiatus for around three years. Before going on a break, he has amassed a whopping 200,000 followers on Twitch, something which is quite considerable. He is also a Twitch premium partner.

Ducksauce is back on Twitch

It was back in November of 2019, that Rhode came back to the game streaming scene. Matthew returned to the video game streaming platform with a special stream and also introduced himself with Curb Your Enthusiasm theme.

As soon as he got back, many of his long-term subscribers were more than just surprised.

He is also a Bushcraft expert

Well, the more you know about Matthew the more surprised you get. Aside from all the stuff he does on a daily basis, Rhode is also a bushcraft expert.

He studied bushcraft at the Jack Mountain Bushcraft School. Further, Matthew also shares a lot about his journey through the podcast, No Days off with Matthew Rhode.

A few years ago Adrianne was one of the most sought-after models. Whenever she is linked with someone, there was a lot of curiosity surrounding the guy.

After dating for around a year or so, Matthew and Adrianne exchanged vows in an incredibly beautiful ceremony on September 15th, 2018.

It’s a dream of everyone to marry in a way that somehow depicts their imagination. Well, Adrianne and Matthew were incredibly lucky in this aspect.

The lovebirds tied the knot in a Game of Thrones-themed wedding. Right after their marriage, Curry shared the news of her big day through a lengthy post on Instagram.

In the caption, America’s Top Model star mentioned she and her boyfriend settled for a small and intimate wedding because they didn’t want to have all the agony and stress of planning a nuptial. Besides, the small affair took place in Glacier National Park in Montana.

Prior to Adrianne’s marriage to Matthew, she was married to actor Christopher Knight.

No, as of now, the lovebirds don’t have any kids between them. The pair is currently in their early 40s so they might be planning to have a baby soon.

How much is Matthew Rhode net worth?

As of now, Rhode’s net worth is estimated to be around $1 million. He earned the major portion of his income through his various endorsements and work as a voice artist.