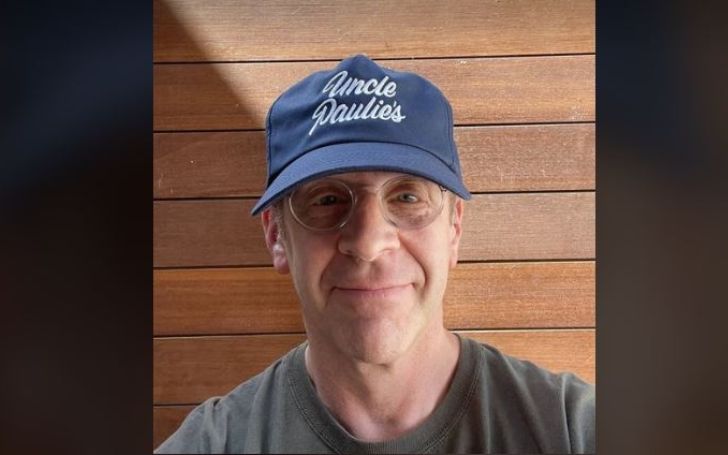 Paul Lieberstein is an actor, TV producer, screenwriter, and director. He is prominent for playing the fun killer Toby Flenderson in the NBC sitcom, The Office. Paul portrayed the arch nemesis of the show’s protagonist, Steve Carrell’s Michael Scott.

Lieberstein was also one of the show’s writers and producers. In The Office, he was among the people who worked both on and off the screen. Throughout his career, Lieberstein has gone through the ranks of a showrunner, writer, and ultimately director for shows like The Office, The Newsroom, The Mindy Project,  and the Netflix series, Space Force, among others.

Paul Lieberstein Is Jewish – How was His Childhood?

Lieberstein is the son of Jewish parents. Paul’s mother, Judith is a clinical psychologist while his father, Stanley used to be a partner in the Stamford law firm St. Onge, Steward, Johnston, and Reens during the late 2000s. Liebertein’s father specialized in intellectual property law.

The 55 years old actor, Paul Lieberstein is a native of West Hartford, Connecticut. Lieberstein was born on Feb 22, 1967.

Lieberstein graduated from Hamilton College in 1989 with a degree in BA in economics. He originally wanted to become a financier.

Years later in May 2011, the Westford native would receive an Honorary Doctorate of Fine Arts from Hamilton. He is also an ex-student of Conard High School; it was where he wrote his first sitcom with some friends. At Conard, Lieberstein also was in a band playing the vibraphone.

Warren wrote and produced episodes like Koi Pond and Cafe Disco. What’s more, Warren also has a mention in the show’s Goodbye Michael episode as Rory Flenderson, the brother of Toby Flenderson. He comes across as a guy who happens to be the resident of Boulder, Colorado just when Michael is about to move there with Holly.

On the other hand, Paul’s sister, Sussanne, is the president of programming for YouTube Premium. She previously served the same role for MTV.

How Paul Lieberstein Became A Writer?

After college, Paul moved to New York and started working as an auditor at Peak Marwick International. He remained there for about six months after which the Connecticut born did a day job at his father’s law firm.

He eventually escaped that job by writing a spec TV script that ultimately kicked off his writing career. For that, Lieberstein and his writing partner first got an agent and moved to LA. In the west, they initially lived off Hollywood Boulevard.

One of Lieberstein’s first jobs as a writer was on the popular Nickelodeon series, Clarissa Explains It All. The Hamilton graduate wrote for the episode, President Ferguson. He, however, would lose the job after one season when the Emmy winner and his pen-partner split up.

Has He Been In A Movie?

Lieberstein’s debut in the film as a writer and producer came through the 2018 comedy feature, Song of Back and Neck. The movie which premiered at the Tribeca Film Festival stars Paul as its lead, Fred.

As for his recent projects, the Weird Science writer apparently is working on a new workplace comedy movie, Out Of Office, that unfolds the story of employees working from home. His other movie, Remote, where he served once again as an executive producer is also currently under post-production.

‘Remote’ and ‘Out Of Office’ are the second and third time Paul directed movies. There’s also the upcoming feature, Not An Artist, and Top Shelf Singles, a short film.

Paul Lieberstein is Married to His Wife, Janine Parebo Since The Late 2000s

Paul married the Manhattan native, Janine Poreba in mid-July 2008. The couple tied the knot at Battery Gardens, a restaurant in New York. Paul and Poreba’s wedding was officiated by the Rev Dr. James G Speer, a Presbyterian minister. Janine kept her original name.

Paul’s wife, Poreba is the daughter of a science teacher at Columbia Grammar and Preparatory School in New York and a teacher at Bard High School Early College, also in New York. Janine, the New Yorker, started dating the People Of Earth actor in 2007.

A writer from the beginning, Lieberstein apparently never intended to appear in The Office episode let alone as an integral part of the cast. In fact, before his role as Toby, Paul never had credit as an actor.

He allegedly was supposed to be a one-time face but later after an NBC executive loved the dynamic between Michael and Paul’s portrayal as an HR of the Dunder Mifflin, Toby went on to become a series regular. Lieberstein in an interview admitted while the transition from the show’s writer to acting happened quickly, his co-actors helped him with that.

He Left ‘The Office’ To Develop Its Spin-Off, ‘The Farm’

While the father of one remained with ‘The Office’ throughout its nine seasons either as a writer or otherwise, Lieberstein did leave the show for a while after its eighth season. He did it in order to focus on developing the show’s spin-off, ‘The Farm’, about the story of Dwight Schrute, one of the quintessential characters on The Office.

Unfortunately, NBC never green-lit the idea and the show never came to fruition. The studio though encapsulated Lieberstein’s idea of The Farm in the original series itself giving it an entire episode with the same title.

Lieberstein Struggled With Back Pain For Years; Later Made A Film On It

Similar to his character in the film, Song of Back and Neck, Paul in actuality suffered from backache for decades. The condition which reportedly began in his twenties was so bad that the Newsroom director says he often was unable to move his neck. He, in an interview, said how difficult it often would be for him to look at things with moving his entire body.

Paul additionally also was unable to drive. Further, none of the remedies ranging from chiropractors, physical therapists, surgeons, and back rollers helped the Space Force writer.

Eventually, he got a book from his wife, Janine about anger and suppressed emotions. After reading that Lieberstein realized the pain was rather a psychological issue. ‘The King of The Hill’ producer gradually worked on that and ultimately relieved his back and neck pain.

Paul Lieberstein Is Related To The Office Producer, Greg Daniels

Daniels is the screenwriter and television producer of The Office in addition to other shows including Parks and Recreation, King Of The Hill, People Of Earth, Space Force, and Upload, among others. Daniels is also Paul’s brother-in-law; Greg is the husband of Lieberstein’s sister, Sussanne.

In fact, it was Greg through whom Paul landed the writing job at The Office. The ex law firm employee had worked with Daniels before and also had known him for a long time. As such, they did King of Hill together.

When Daniels started ‘The Office’, Paul stopped by the pilot as he loved what was happening. He wanted to see the production since he was a fan of The Office, the British version, and the original one.

Having worked with Paul in previous projects, Daniels eventually asked him to write for the show, to which the situational comedian agreed. With Greg, Lieberstein had also won his first Emmy in 1999 as a producer for their work in King of The Hill.

Paul Is Also Related To His Office Co-Star, Angela Kinsey

Paul and his ‘The Office’ co-star, Angela Kinsey (Angela) were related to each other in real life. Kinsey was Lieberstein’s sister-in-law. The actress in real life was married to Lieberstein’s brother, Warren, and the two even had a daughter when together. As a matter of fact, Kinsey and Warren were expecting their child during The Office’s fourth season.

Lieberstein’s brother and Angela, however, would divorce after 10 years of marriage. After divorcing Warren, Kinsey married actor Joshua Snyder in 2016. The same year, Paul’s brother also tied the knot with the ‘Crazy Ex-Girlfriend’ writer and producer Audrey Wauchope with whom he already has a daughter named Hazel.

How Rich Is Paul Lieberstein; His Net Worth And Others

Although he has far fewer credits as an actor than his Office co-stars, Paul is still one of the richest writers Hollywood knows. From years of his work behind the scenes, Paul has amassed a net worth of over $15 million.

The figure might pale in comparison to his former colleagues such as John Krasinski, Jenna Fischer, and others, he, reportedly, however, is just as wealthy as the Dwight Schrute actor and his other Office co-star, Rainn Wilson.