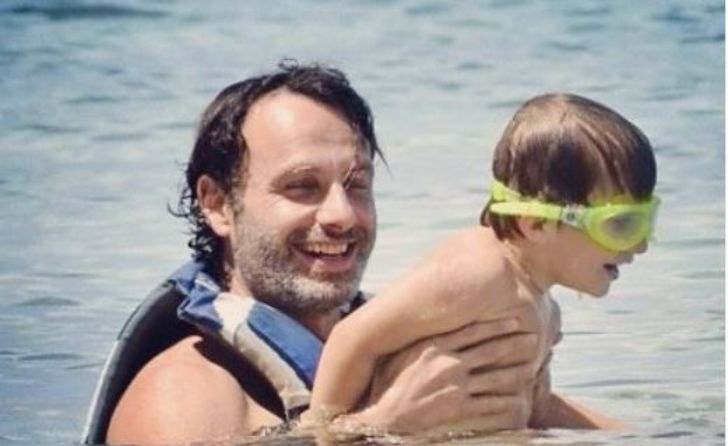 Arthur Clutterbuck is the son of the British actor Andrew Lincoln, known for his role of Rick Grimes in the AMC post-apocalyptic zombie horror series The Walking Dead. Lincoln had Clutterbuck with his longtime wife, Gael Anderson.

While a celebrated actor in every right, Andrew Lincoln is notorious for keeping his family affair to himself only & that mostly includes his children Arthur and his sister, Matilda.

Although there might not be much to tell about the only son of Lincoln, there are still some mentionable moments from Arthur that are worth reading. In fact, Arthur has been crucial in deciding some of his father’s big steps in his acting career. Read all of them in the details that are to follow.

Arthur, the first son of Andrew and his wife, was born around the year, 2011. The now 11-year old’s father and his grands spent most of their lives in Bath, Somerset.

His actor father though was born in London. He and his parents had moved to Hull, for their patriarch’s job before settling in Bath.

Arthur’s paternal grandfather, Andrew Lincoln’s father is a civil engineer while the grandmother was a South African psychiatric nurse. The Love Actually star in an interview said his mother was very sociable and generous of spirit.

Arthur’s parents, Andrew and Gael met on the set of the British show Teachers. The former previously worked as a flutist. She additionally is also credited for her work on the TV show, Teachers.

She was in fact Lincoln’s P.A. when they first met in the early 2000s. Lincoln had a directorial gig in the Teachers’ two episodes. After the marriage, Andrew and Gael welcomed two children, Arthur and Matilda.

Why Arthur Doesn’t Have His Father’s Last Name Lincoln?

Often times there has been some confusion as to why Arthur and his sister have a different surname to their father’s. Although they are the English actor’s biological children, the kids do not bear the last name, Lincoln.

The reason is while Arthur’s father is better known as Andrew Lincoln, his real name is Andrew James Clutterbuck. The 48-year-old Lincoln adopted the stage name Andrew Lincoln when he was a student at the illustrious Royal Academy of Dramatic Art in London.

The departure of Matilda and Arthur’s father, Andrew Lincoln from the Walking Dead in 2018 was certainly a shocker for the show fans. As for why the London-born actor left one of the popular TV series in basic cable history, the reason was simple: family; his children, and his wife.

The distance between Lincoln’s former on-screen persona and his real-life also factored in a lot to his decision to quit the show.

Lincoln is an Englishman and The Walking Dead used to have shoots for over half the year in Georgia, which kept him away from his wife and kids for prolonged stretches of time. While working on “The Walking Dead” the Afterlife alum spent roughly eight months of the year slaying zombies in Georgia.

When filming wrapped, he traveled back to the Cotswolds where he eventually made it a goal to “try to be as present as [he] can be” for his wife, his children, and even his friends.

“I have two young children, and I live in a different country, and they become less portable as they get older. It was that simple. It was time for me to come home,”

Lincoln said of his decision to leave the AMC series to Comic Book in Sep 2018. As production on Season 9 went underway, Andrew decided it was time for him to somewhat reluctantly step away from the show.

After years of spending the majority of his time away from his home in England, Lincoln thought it was time for him to come home. Andrew has stated family means everything to him.

To say more, Arthur’s father, Andrew Lincoln and Scott Gimple, the man responsible for The Walking Dead on AMC, had an exit planned for the former as early as season 4. The British star eventually left the show for good after its ninth season.

The actor first confirmed the news at San Diego Comic-Con in July 2018, explaining that his choice to step away from the show was all about his family.

Arthur Told His Father To Return To The Walking Dead

The irony though is Arthur and his sister, sometime after Lincoln’s departure, wanted him to get back to being Rick Grimes.

In May 2021, explaining his kids’ urge to make his return to the show, Andrew said,

“I’ve never missed America more than last year, actually — it’s quite interesting. And my children… I came back for my children and they’re like, ‘What are you doing? We want to go back to America, get your boots on, and start getting into the zombies!’ So there’s a certain sense that I’ve missed the character — I think he’s a magnificent character and I loved being Rick.”

Lincoln once said during his time on The Walking Dead, his son, Arthur developed quite a fascination with the state of Georgia. The actor said his son wouldn’t let him leave England until it was Georgia.

Speaking of his relationship to Georgia, Lincoln said:

“I mean, the connection that we have to the land, to the place, to the people. Arthur — my 10-year-old son — won’t let me take a job unless it’s in Georgia now. He just misses it.

The Brit added his son at one point asked him continuously to take him to the place they lived while their father was doing The Walking Dead.

“He goes, ‘Take me back there!’ I came back home for the kids, and now they’re sick of me, and I wish I’d never left. It was a terrible decision,”

His Father Andrew Lincoln Is Returning To The Walking Dead World

Lincoln had indeed spoken about coming back as Rick Grimes when the AMC series was still running. On a few or two occasions, he responded the similar queries of media with “Never say never.”

Andrew Lincoln in April 2021 said he hopes his three spin-off Rick Grimes movies would start shooting in the spring of the same year.

There had been delays due to the 2020 covid 19 pandemic. Even when he first announced his exit from the show, Andrew was careful to say that he was leaving “the TV show” and not departing the world of “The Walking Dead” altogether.

So some fans predicted from then that they were going to see him again in one form or another.

What Arthur Clutterbuck Thought Of His Father’s Character, Rick Grimes?

Arthur and his sister used to think their father was crazy when the Boston Kickout actor tried to remain true to his The Walking Dead character Rick Grimes off camera.

Lincoln isn’t a method actor, but at times he did borrow some tactics from the method acting playbook. Whenever a new season of “The Walking Dead” was in production, the father of two would speak in his character’s southern accent on and offset. Seeing this, Arthur and his sister would rather apparently react in a confusing way.

“My wife and children think I’m bananas,” Lincoln told The Guardian. “It’s very unsettling for them because they don’t know who they’re talking to,”

said the Gangstar No 1 of his kids’ reaction to him speaking with Rick Grimes accent.

How Rich Is Arthur’s Father, Andrew Lincoln? What Is His Net Worth

Arthur’s father is a millionaire and rightly so. The Enduring Love star has an apparent net worth of over $16 million. And of course, his fame from The Walking Dead helped him more than a lot in achieving those numbers.

Insiders claim his Walking Dead salary was set from $650,000 to as much as a million dollars per episode. That was a pretty huge jump from his initials days of the series when he used to make only $90,000 per episode.

Worth mentioning is Arthur’s father Lincoln already had a successful career before The Walking Dead. In fact, the father of Arthur and Matilda was big in the UK before moving to the US.