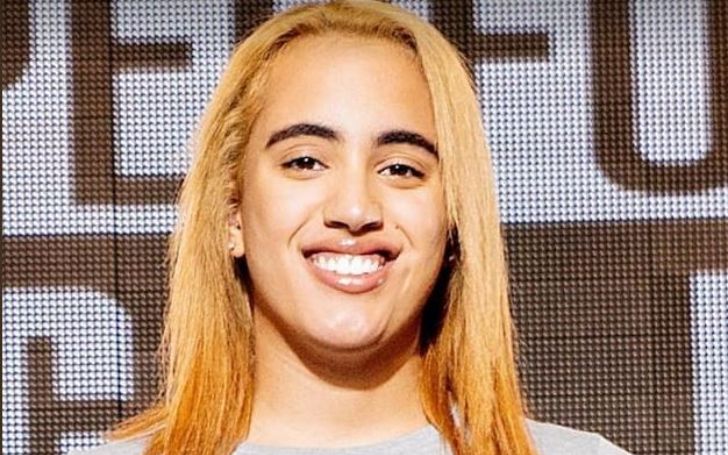 Simone Alexandra Johnson is the daughter of Dwayne The Rock Johnson and his first wife, Dany Garcia, to whom he was married for almost ten years. Simone’s father Mr. Johnson created a huge legacy during his time with WWE.

Now trying to add huge value to the Samoan Wrestling Family is his oldest daughter, Simone Johnson, one of the newest addition to WWE from the Johnson family. Her talent has been grabbing tremendous attention for a while now.

Simone has admitted that wrestling means the world to her. But can she make her own lane in wrestling & make it to the list of several performers who have succeeded with a large shadow cast over them by their parents, her dad included. Know all these along with some unheard of personal things about Simone Alexandra Johnson, the youngest person to sign with the WWE, in the headings below.

Pretty much known is the fact that the first child of former WWE superstar, Simone Alexandra Garcia, born, on Aug 14, 2001, isn’t the first one from her family to consider wrestling as a career.

Simone has two younger half-sisters from her father Johnson’s marriage to his second wife, Lauren Hashian: Jasmine and Tiana.

Simone Alexandra Johnson Education; What College Does She Attend?

The 20-year-old Simone who grew up mostly in Florida graduated high school in May 2019, and now apparently is a student at New York University.

The granddaughter of Ata Johnson, Simone has said she’ll be training at the Orlando Performance Center (for her wrestling) while studying entertainment management at college.

Simone Was 11 When She First Stepped Into The Ring

The first time Simone got in the ring was when she was 11. Her ex-WWE superstar father took her to the ring before WrestleMania 29.

Of that experience, Simone said,

It was an unreal feeling and he knew right there, this was what he wanted to do.

Johnson at 18 signed with the WWE back in May 2020. Prior to that, she took three months of training at the Performance Center.

With that, she became the youngest signee in the company’s history and the first fourth-generation superstar in the organization’s history.

Alexandra’s father, the Ballers star has been more than happy to support those ambitions. Dwayne talking about his daughter’s wrestling career, said,

“It blows my mind. What an honor that my daughter wants to follow in my footsteps. It sounds cliché, but she actually wants to create and blaze her own path.”

When he went to the Jimmy Fallon show, Dwayne said his daughter wanted to “create and blaze” her path in the sport. The Scorpion King likewise added,

“At 16, she was working her ass off quietly under the radar, in the ring getting thrown around, you know all the bumps and bruises that go with pro wrestling.”

Her father, The Rock often pays a visit to the center to watch Simone train and has also lent his advice since she started with WWE.

Simone WWE Career So Far; When Is She Going To Make Her Debut?

After joining WWE, Johnson’s daughter became the first-ever fourth-generation star. For the initial phase, Simone worked under the direction of her dad’s old rival Triple H at the Performance Center and NXT.

Shortly after joining the wrestling, Johnson’s daughter said being part of the organization meant the world, especially because her family has a “personal connection” to wrestling.

The Tooth Fairy star added she was grateful for the opportunity to carry on the Johnson legacy. She has said she loved wrestling and would probably want to be more in the spotlight through the sport. For her wrestling career, Alexandra also trained at the WWE Performance Center in Orlando, Florida.

Miss Johnson was the second most improved in squats after released star Brandi Lauren Pawelek and Ava Storie, the actual winner.

People who have trained beside her ascribe Simone Johnson as a monster in the gym like her father and a top recruit at WWE’s Performance Center. Simone Johnson though is yet to make her in-ring debut for the company.

Apparently, the young Johnson might make her appearance on NXT very soon but as things stand, it remains to be seen when The Rock’s daughter will actually step foot inside the ring.

It was reported that Simone filmed some kind of footage with Zelina Vega at WWE’s Performance Center. It apparently was during the time when Vega was alleged to return to the company.

The young wrestling enthusiast also made a big appearance in the movie and TV world in 2018 when she became the Golden Globe Ambassador for that year’s awards ceremony.

Simone, in fact, was technically the first-ever Golden Globe Ambassador. As such 2018 was the year the title changed to Miss Golden Globe.

Along with the honor of the first-ever Golden Globe Ambassador, Simone also teamed up with GlobalGirl, an organization that focuses on empowering young women from disadvantaged communities and giving them the tools they need to achieve their career goals.

Johnson upon gaining her ambassador title said it was a stepping stone for whatever she wanted to do with her life in the future as she wanted to use that platform to be a role model to young people.

The organization focuses on empowering young women through visual journalism.

She Is Also A Model

Simone, who stands at 5 foot 10 inches (178cm) in height, signed with IMG models in 2017. Although she then was not even 20 years old yet, she had accomplished a lot in her career be it signing with a famed modeling agency or being an ambassador for some glamorous event.

With over 400k followers on Instagram, Simone often voices her thoughts and sheds light on certain issues. Through her socials, Simone also gives a voice to social issues, including the Black Lives Matter movement and safer gun laws.

She also supports athletes who’ve taken a knee during the national anthem. Through her social media handles, she has also called out a magazine for a body-shaming tabloid cover story on Rihanna.

Simone additionally is very active on her social media platforms be it Facebook, Insta, or Twitter, and keeps tweeting about WWE events from time to time.

So far Johnson has undergone knee surgery thrice. Her significant one however was in September 2020. This one was was her third. Apparently, the condition was quite severe.

Johnson has filled her Instagram feed with screenshots, quotes, and odes to prominent horror films.

Who Are Simone’s Parents?

Her parents, Dany Garcia and Dwayne Johnson remained husband and wife from 1997 to 2008. She is the only child of “The Rock” and his ex-wife, Garcia.

Alexandra’s mother, Dany Garcia is a businesswoman and producer, and she and the WWE superstar are still business partners.

They co-founded the production company Seven Bucks Productions. It has produced Simone’s father’s a number of movies, including Fast & Furious Presents: Hobbs & Shaw and Baywatch.

Simone’s mother, Dany in addition is also the co-producer of films like Jumanji, Baywatch, and Ballers, all of which Dwayne appeared in. She is now married to a professional trainer, Dave Rienzi.

What Is Simone Alexandra Johnson’s Net Worth?

Since Simone is a trainee and has yet to get her mainstream fight, it might be a while before she starts cashing out from her wrestling career. And it certainly going to be years or even decades before she starts pulling in lucrative contracts such as that of Becky Lynch, Ronda Rousey, Charlotte Flair, or even her father’s.

Though she seemingly has her internet reputation that very well might be making her bulk of money if not hundreds and millions of dollars.

In any case, financial worries shouldn’t be that much of a concern for the 20-year-old Alexandra given that her father is one of the highest-paid and the richest Hollywood actor with an estimated net worth of around $800million.

Simone additionally also has that guaranteed nurturing from her mother’s side who herself is also a successful and monetarily sound businesswoman.

Does Johnson Have A Boyfriend?

This is one of those things that the eldest daughter of the Jumanji actor is notoriously veiled.

While she doesn’t leave a chance to showcase what her social life looks like, the what-about of her personal life is somewhat of a foggy matter at hand.

It henceforth is up to anyone’s imagination whether the Floridian-born Miss Johnson has a boyfriend or not. Apparently, she doesn’t seem to be dating a boyfriend publicly.