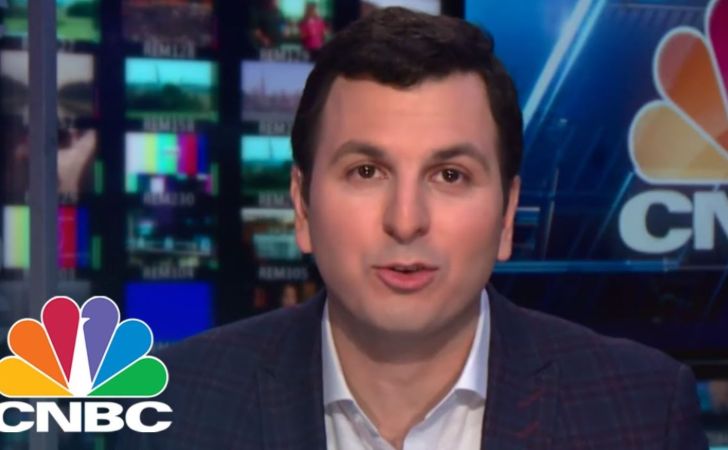 Eric Chemi is a former TV reporter for CNBC and a data analyst. As of now, he is the founder and managing director of Team & Total, an insurance agency. Apart from his successful professional career, he is also famous as the husband of American journalist Kelly Evans.

Over the years, Chemi has had his hands in different professional fields and has achieved pretty much as a professional. But what about his marital relationship? How is his relationship with his wife? Here, in this article, we are going to unravel every aspect of his life including his career, love life, and financial details.

Eric Chemi Is Married To Wife Kelly Evans Since 2017

If you were unaware, Eric is a married man. He is married to American journalist and CNBC TV reporter Kelly Evans. The couple married on April 22, 2017, in a very intimate wedding ceremony.

The news of Eric and Kelly’s wedding was first announced by her co-anchor Bill Griffiths during the show Closing Bell. Moreover, Bill also congratulated the couple in a video clip posted by CNBC in which he said,

“You guys are match made in heaven..let me just tell you..as you know my wife and I are celebrating our 35th Anniversary this Monday I can only hope that you have as much as happiness as Cindy and I have. On behalf of the whole gang who love you as you know…your colleagues at CNBC and most especially, the gang on Closing Bell.”

As of 2021, the couple is married for around 4 years and their relationship seems as strong as ever.

He Is The Father Of Two Children

Eric Chemi is already a father of two children with his wife. His first child, a son was born on 5 July 2018. The first child in the family arrived just around a year into their marital relationship.

This time again, CNBC took the opportunity to congratulate the new dad and mom for becoming parents. The channel posted a short clip of the healthy baby.

Likewise, the couple also has a daughter. Unfortunately, they have not yet revealed the details of their secondborn.

As we mentioned earlier, Eric has had his hands in several professional fields. He started his career as an Information Technology Summer Intern at Morgan Stanly. Thereafter in 2004, he worked as an Equity Trading Analyst at JPMorgan Chase & Co.

From 2005 to 2007, he worked at a Prop Trading Company named JPMorgan Chase & Co. In April of 2007, he quit the job and joined Fortress Investment Group as a Portfolio and Risk Analyst.

In March 2010, he worked as Head of Data and Research for Bloomberg TV and Businessweek magazine named Bloomberg LP. Soon after this, he moved to NASCAR as Data Analysis Consultant.

By December 2014, he joined CNBC as a full-time TV reporter, where he worked for over 6 years until Jan 2021. Well, since Jan 2021, Chemi has been working as founder & managing director of Team & Total Insurance Solutions LLC.

Needless to say, he has been doing pretty well in his professional life.

Eric is an educated individual. After finishing his schooling, he received a Bachelor of Science degree from the Massachusetts Institute of Technology.

Besides, he also has a Data Science Certificate from General Assembly, which he received in 2013.

Is Eric Chemi On Social Media?

Unfortunately, Chemi is not on any social media platforms despite being a public figure. It looks like he does not enjoy being on socials. But unlike him, his wife Kelly is pretty much on social media.

How Much is Eric Chemi Net Worth?

As of 2021, Eric is the founder & managing director of Team & Total Insurance Solutions LLC. Besides, he also worked as a reporter for CNBC. Well, for such high-profile careers, he has been definitely paid a decent sum of money as his salary. But when it comes to his net worth, he has kept things closed. However, some sources have estimated that he has a minimum of $1 million in net worth.

On the other hand, his wife Kelly is wealthy enough with a net worth of around $3 million as of 2021, as per Celebrity Net Worth.

Like we said earlier, Kelly Evans is an American TV personality who currently works as the News Anchor for CNBC News. She has been active with the network since 2012. Prior to this, she worked for The Wall Street Journal as a columnist and Economic reporter.