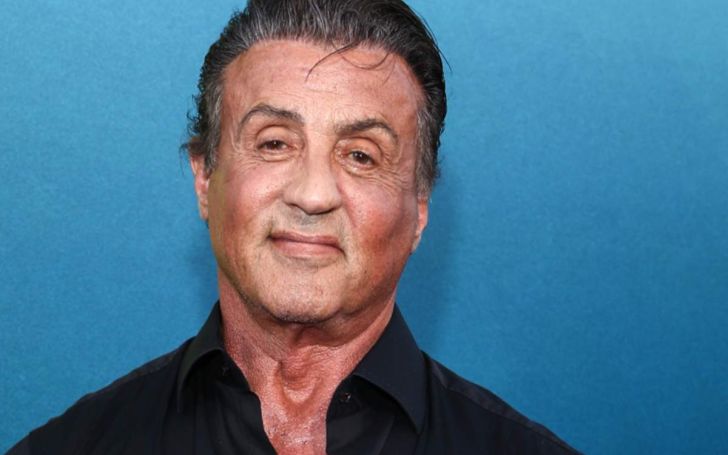 Seargeoh Stallone is the son of successful American actor Sylvester Stallone, and his wife Sasha Czack. As the son of a famous father, he has been in the spotlight ever since he was born. Unfortunately, at the age of 3, he was diagnosed with autism.

As of 2022, Seargeoh is in his 40s but he has refrained from showing up in public places, partly because of his health condition. Yes, he is diagnosed with Autism.

Today let’s try to uncover the truth behind Seargeoh and find out about his biological mother, siblings, relationship with his dad Sylvester, health condition, & his current whereabouts.

Seargeoh Stallone Is The Son Of Sylvester Stallone

Seargeoh was born in 1979, in California, United States of America. He is the second son of Hollywood superstar Sylvester Stallone and his first wife Sasha Czack. Talking about Seargeoh, he is in the media spotlight due to his famous father.

Aside from his father’s fame, he himself doesn’t have a career worthy of fame. We’re sure he would’ve become an actor if it wasn’t for his health condition. Tragically, he is Autistic because of which he never had a normal life.

Despite all the odds, Seargeoh persevered through life and is living happily. At this time, when people are never satisfied with what they have in life, he lives on.

Talking about his ethnicity, he is Italian. Furthermore, he has Italian and European ancestry. His father Sylvester has a mixed ethnicity of Italian and French.

Sylvester married Sasha on December 28th, 1974, after dating for several years. The duo dated for a while before deciding to tie the knot. The pair at first almost got divorced in 1979 but later decided not to.

Nevertheless, Sylvester’s habit of involving in casual encounters outside his marital life eventually crumbled his marriage after 11 years in 1985.

After the divorce, both of them went on to marry again. While Sly married two times, first to Brigitte Nielsen from 1985 to 1987, and then Jennifer Flavin, from 1997 to the present, Sasha Czack married and divorced Rick Ash.

While growing up, Seargeoh, despite being not able to communicate properly, used to draw, write letters, and repeat certain words. Sly and his wife Sasha used to call him, the ‘silent genius.’ Still, his father Sylvester, and his mother Sasha decided to have his health condition assessed. When he was 3 years old, the doctor gave the Stallone family the devastating news.

At the time, both of Seargeoh’s parents were absolutely dumbfounded by the news. In an interview with PEOPLE, Sasha told at the time, “We both broke down.”

The doctor suggested the Stallone’s keep their son in an institution for his treatment but the pair refused. They decided to raise their son all by themselves surrounded by his loved ones.

As a doting dad, who wasn’t really around during his kids’ childhood due to his busy schedule, Stallone out of his way to set up a research fund for his son Seargeoh.

The research fund was administered by the National Society for Children and Adults With Autism. While talking about how he collects the fun, Stallone told PEOPLE, “I use my films to have premieres that raise money for the fund.”

Stallone wasn’t really present while his two sons were growing up. This created an emotional distance between him and his sons. His late son, Sage Stallone once said,

“When I was growing up, my dad was always off making a movie somewhere. He didn’t have time for me so my brother (Seargeoh) and I were raised by our mom (Stallone’s first wife, Sasha).”

Besides, Sly praised his ex-wife for her due diligence in regard to their son’s health. He said, “Sasha does the hard, in-the-trenches warfare.”

Aside from that, Seargeoh’s mother Sasha also made a resolve to do more research on this disease and find a cure for her autistic son.

In total, Sylvester Stallone has five children, two boys, and three girls. He shares his two eldest sons, Sage, born May 5th, 1976, and Seargeoh with his first wife Sasha, a photographer and actress.

Besides, Seargeoh lost his older brother Sage in 2012 due to a heart condition. Before his tragic demise, Sage had walked down the aisle with his girlfriend, Starlin Wright in 2007. They divorced in 2008.

Did Seargeoh ever appear in movies?

Well, many of you might not know this but Seargeoh once appeared together with his dad. He played the role of Rocky Balboa Jr., Sylvester’s newborn son in the movie, Rocky II. The little kid you see in the hands of Rocky’s sweetheart Adrian, well, that is Seargeoh.

The star kid was on the verge of becoming a great star like his father, however, it didn’t happen. Some times after appearing in the movie, he was diagnosed with Autism and that was it.

In the meantime, his late older brother, Sage appeared in quite a few movies before his untimely death in 2012. Seargeoh’s half-sister Sistine Stallone has also worked in showbiz.

What is Seargeoh Stallone doing now in 2022?

There has been absolutely no information regarding Seargeoh’s whereabouts. His father and half-sister have never mentioned or even talked about him, be it on social media or anywhere.

We’re more than certain that he is doing fine and living with his family in their mansion in La Quinta, California. As of 2020, he is in his 40s and if reports are to be believed, he is not married to anyone.

How much is Seargeoh’s net worth?

His father Sylvester is a multi-millionaire actor. He has a staggering net worth of $400 million. He earned this massive amount of wealth through his long career as an actor, scriptwriter, and director.

It shouldn’t be a surprising thing to know that when you’re a son of a millionaire, you’re bound to have an affluent lifestyle. Similarly, Seargeoh, along with his three half-sisters enjoys a lavish life. His sisters often go out on most exotic of vacations together.