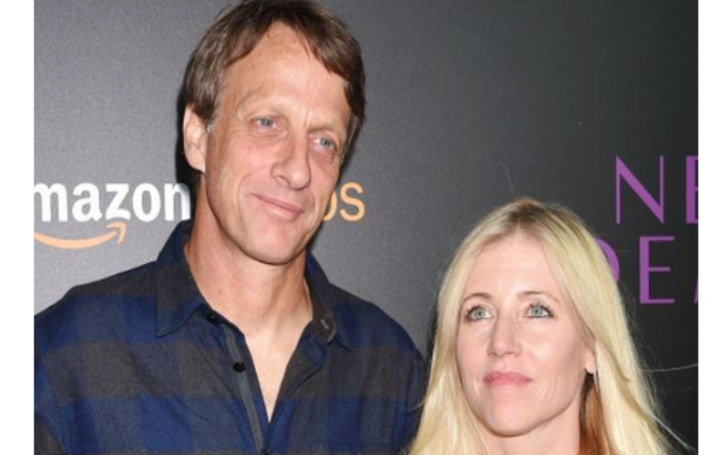 Cathy (Catherine) Goodman is the wife of skateboarding legend Tony Hawk. People often regard Master of tricks: Tony Hawk as the best-known skateboarder in the world. He gets credits for putting the sport on the map during the 1990s when he pioneered a daredevil form of skating called ‘vertical skating’.

Relationship-wise, Hawk has been married four times. One could say he doesn’t appear to have similar success on and off the skatepark.

However, as it appears his union with Goodman is it and he might have found his partner for life. So, what is that Cathy makes different than Tony’s previous wife? Who was she before marrying the star athlete? Know all these in the article below.

Cathy, the daughter of Catherine Bennett Shook is a native of Michigan. She was born in 1969 on May 13. Goodman has two older brothers.

She grew up in Bloomfield, Detroit as a punk rocker who skated in the ’80s. Goodman spent most of her high school years downtown, going to shows and stuff.

The Michigan native lost her mother-in-law (Hawk’s mother) to Alzheimer’s in December 2019.

The 52-year-old is now a theater and film producer. With her husband, she is working on “Slam,” a Broadway musical with live skating that will debut once the theater industry reopens.

Goodman married Hawk at Adare Manor Hotel and Golf Resort on June 27, 2015. The bridegroom donned a black suit and his bride opted for a more non-traditional black lace gown. The floor-length lace dress came with a gold headpiece and a bouquet of red roses.

This was Tony’s fourth marriage. He and Cathy started dating in 2011, a year after she had divorced Tony’s close friend Matt Goodman. They’d been together for 20 years.

Tony supposedly left his third wife Lhotse Merriam to be with Cathy, who had been married to Matt.

In an interview with Sydney Morning Herald, the long-time athlete described how he and Cathy took up with one another. He explained how they connect on a deep level in terms of their approach to life. He and his wife of six years have a unique approach to parenting.

While they have a loving relationship with one another, Cathy and Tony actually don’t have any kids of their own, as of yet. They, nonetheless, co-parent each other’s children from past relationships as though they are their own.

Goodman’s sons, Miles, and Calvin from a previous marriage have become a core part of Tony’s life. The Hawk family usually spends some part of the summer in Detroit. They used to have a house in Woodbridge but they sold it in 2019.

Goodman’s current husband, Tony has six children from his three previous marriages all of whom were there with their partners to celebrate the nuptials. The vertical skating creator married his first wife Cindy Dunbar in 1990 and had a son, Hudson Riley Hawk, now 28.

Unlike his father, who is known for his vert style, Hudson is a professional in street skating. The eldest son of Tony turned pro on his 21st birthday in December 2013 and became Skateboarder Magazine’s 2013 Amateur of the Year on the same day. His sponsors include Baker and Lakai.

With Erin, Tony had two sons, Spencer, now 21, and Keegan, 20. The former is an electronic music producer who releases music under the stage name, Gupi. Keegan is a college student in Seattle studying photography.

Tony’s marriage to Erin also crumbled and two years later, in 2006, the former married Lhotse Merriam. She was his ex-publicist. Their daughter, Kadence Clover Hawk is now 12.

Cathy’s Ex Is Totally Fine With Her Marrying His Friend

Hawk’s best friend and Cathy’s former partner, Matt Goodman admitted he bears no grudge against the skating legend for dating his estranged wife. Matt said he was ‘totally cool’ with Hawk starting a relationship with Cathy.

Goodman’s ex-spouse, Matt said that while he is aware people would see the pairing as unusual given the circumstances, yet he’s fine with everything. He added he has a new girlfriend and hoped Tony, Cathy, and Lhotse can all be happy.

Mr. Goodman shared Hawk had told him that he was dating his estranged wife and mother of his two children; news which he took well. Matt told he, however, had suspected something like that even before Hawk’s confession to him. The Skateboarder and the actor have been best friends for more than 30 years. They were so close that Goodman was a groomsman at all of Hawks’ three weddings.

Additionally, they were business partners for a time making action sports films, although they stopped working together a long time ago.

Her Husband’s Net Worth

Cathy’s partner, Hawk is reportedly worth over $140 million earned through his skating and hugely successful video game series. And that should hardly be a surprise given he is the owner of skateboard company Birdhouse and one of the most successful and influential pioneers of modern vertical skateboarding.

The credit goes to all his career as a pro skater as well as various endorsement deals spanning from clothing to video games.

In the 2000s, the San Diego-born master’s Pro Skater video games were outselling Super Mario. Goodman’s husband has made a number of investments over the years, such as a coffee chain and in tech companies.

He drives his family around in a Tesla Model S; the car with an all-white interior. Hawk also has several properties in more than one state.

During the infamous covid pandemic, when many families struggled with the chaos of working and taking classes under the same roof, Mr. Hawk and Ms. Goodman were thankful for their 5,080-square-foot oasis.

The property turned out to be very helpful for three of their children who contracted Covid-19. The size of their house allowed everyone else in the family to spread out and avoid getting sick.

The Hawk-Goodman family was able to have Christmas dinner together on their large outdoor patio and still remain socially distant while two of their children battled against Covid.

Cathy goodman Husband Had To Let Go Of His Wedding Ring

In June 2020, Catherine’s husband had to have his wedding ring cut off after falling off his board and dislocating his finger. The 53-year-old had to be rushed to the hospital by his eldest son Riley, who is also a professional skateboarder.

The veteran skateboarder reported the doctors had to cut his ring off before returning his bones to their full upright and locked position.

This surely wasn’t the first time, the Birdhouse owner took a work-related toll on his body. While he was dating his wife, Cathy in 2011, he went on to lose his front tooth again in the park in Florida.