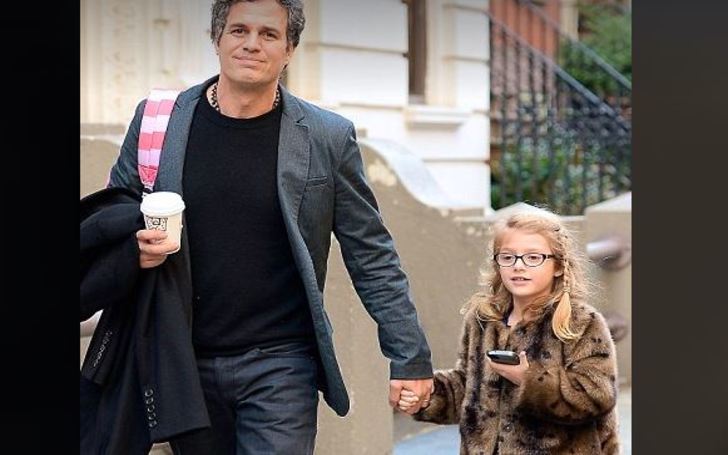 Odette Ruffalo is the daughter of the 13 Going On 30 actor, Mark Ruffalo, and his longtime wife, Sunrise Coigney. She is the youngest child of Mark and Sunrise who is now in her early teens.

Ruffalo is seemingly a cool dad for the internet community. The actor never misses sharing all sorts of fun activities he does with kids on his socials. It would be an understatement to say the 54-year-old actor loves to hang out with his kids more often.

Down in the writings, lie some quirky incidents and moments from the Ruffalo family that particularly includes Odette. Along the way, also read about the story of her parents and her father’s tragic life whilst joining Hollywood.

Odette was born on October 20, 2007. From her father’s side, she is of Italian (from Girifalco) and French-Canadian descent.

Her paternal grandmother, Marie Rose (née Hébert), was a hairdresser and stylist while her grandfather Frank Lawrence Ruffalo Jr. worked as a construction painter. Odette’s maternal grandfather is French and was from the bourgeois community.

Odette lives with her family on the Upper West Side in Manhattan, New York. She has two siblings, a brother, Keen (born, 2001), and a sister, Bella Noche (2005).

Ruffalo first introduced his youngest daughter to the people in December 2007 at around 4 in the evening.

The world first got to know Odette when her father took a stroll with her in NYC along with actor pal Ethan Hawke. The third child of Coigney and her husband was then 10 weeks old.

Is Her Sister, Bella Noche Ruffalo A Transgender?

Given Odette’s sister, Bella sports apparel like boys, several people have speculated she is among the drag kings. While Mark and his wife respect and support Bella’s choice of style, they haven’t addressed the issue of their middle child’s gender identity.

How Did Her Parents Meet?

Odette’s parents, Mark Ruffalo and Sunrise Coigney met in ’98. The former was then a struggling actor and living in a street. They started their relationship and began living in New York. They have been the homeowners in Calligoon since ’99.

Sunrise and Mark married in June 2000. They also did a film together, In The Cut (2003). Odette’s mother was an actress but now is an artifacts dealer and a retailer. She runs an online store named, Sunny Pop.

The Time When Odette Ruffalo Father Had To Take Her To Thor: Ragnarok’s Shooting

In Oct 2017, Ruffalo with ET talked about the time he had done a take-your-kids-to-work-day while filming Thor: Ragnarok in Australia.

The then-49-year-old actor revealed that moviegoers can spot his three kids, Odette then 9, and her siblings, Keen, and Bella in one of the scenes.

“I don’t know if you can see them …but they were in the car in the party scene where Thor (Chris Hemsworth) is taking [Bruce] Baner (Ruffalo) around this crazy new place,”

The actor added they were in that scene, and that donned Dr. Seuss characters.  They were on set all day.”

Ruffalo said his kids found it beyond thrilling to be in front of the camera and had a great day. Much like her father wanted, Odette and her siblings stayed at the shoot all day.

The Kenosha native revealed while his kids enjoyed the experience, they were overset life by the end of the day. When Ruffalo asked them if they wanted to do it the next day, “they responded, ‘Uh, no.'”

She Is Friends With Michelle Williams’ Daughter

Odette’s mother once revealed how she and her family inspired Williams to buy a house in their neighbors in New York.  After Michelle relocated to New York, her daughter and Coigney’s children all went to the Montessori School together. Allegedly, they also visited each other’s homes often.

She Finds Her Father Uncool

The Wisconsin-born actor revealed in April 2015 how his three kids at one time thought he was not cool. This was despite the fact that they knew he was playing Marvel’s big green superhero, The Hulk.

During the red carpet of the Hollywood premiere of Avengers: Age of Ultron, when the interviewer asked what his kids thought about playing one of the avengers, the Spotlight star responded

“Oh, they love this. This is cool for them,”

Mark though added what was uncool for them were their parents, he and Coigney. Odette’s father said “They’re like, ‘You’re not that cool.’”

The father explained it was probably because of Mark and his partner going all parents to Odette and her siblings. He said children get annoyed when their parents say “no” to them all the time and don’t allow them to use computers all the time.

The Golden Globe winner also disclosed that his kids additionally do not pay any attention to his warnings. He said they are instead like want him to angry.

‘I’m going to get you angry,’ Ruffalo quoted his children.

Life was never easy for Odette’s father, Ruffalo since his childhood. He struggled through many of his schooling years. The actor once said he had undiagnosed dyslexia and ADHD, which left him feeling “miserable” throughout his school days.

After her grandfather, Frank’s painting business went under, the family moved to Virginia Beach, Virginia, where they started a new business. It, however, didn’t work and the family moved once again to a “seedy beach community full of burnouts and meth” in San Diego.

Later in life, Odette’s dad suffered from depression. The actor of Italian descent revealed it was Dysthymia, a long-running, low-grade depression all the time.

In his early 20s, Mark said he used to audition for more than 600 roles without hearing anything back.

The Death of Her Father’s Friend And Illness

In 1994, he lost a close friend to suicide. Further, in 2001, the actor’s career stopped briefly after a CAT scan showed he had an acoustic neuroma, a form of brain cancer.

Just weeks after the birth of his eldest son, Keen, the doctors were successful in removing Odette’s father’s tumor.

However, despite the successful surgery, Ruffalo went on to lose hearing in his left ear, and half of his face became paralyzed.

As a result of the paralysis, he lost several Hollywood roles. The Endgame actor even stopped talking to the outside world.

Fortunately, the paralysis in his face eventually subsided after a year away from the spotlight. He though now remains deaf in his left ear.

In 2008, The Hulk faced one more tragedy. That year in December, the police found his brother, Scott’s body with a gunshot wound to his head at his home. Odette’s uncle, Scott died in hospital the next week.

Yet to this day, the authorities haven’t been able to solve the case. With Men’s Journal in 2013, Ruffalo talked about his brother and said

“You never get over it; you just get used to it.”

Ruffalo reasons he did the film The Kids Are Alright, as the role reminded him of his brother’s personality.

Unlike her brother and elder sister, Odette doesn’t have her socials yet. This very well could be because of her young age. In the meantime, she appears frequently on her father’s as well as on her mother’s Insta, Facebook, and Twitter.

Due to his affiliation to MCU, Odette’s dad is among the big earners in Hollywood.

Coigney’s husband reportedly raked in between $2 and $3 million for portraying The Hulk in 2012’s The Avengers. Likewise, in 2018’s Infinity War, the New Yorker allegedly received over $5 million for his appearance as Dr. Bruce Banner.

Although Disney is yet to reveal Mark’s salary from Endgame, analysis projects he cashed in anywhere from $10 to $20 million from the historic box office movie. Not to mention, he constantly shares the screen with Hollywood’s heavy earners like Chris Hemsworth, Robert Downy Jr, Bradley Cooper, Scarlett Johansson, Chris Evans, and Paul Rudd. The aforesaid actors, by and large, have been reported making over $40 million from Avengers 4 alone.