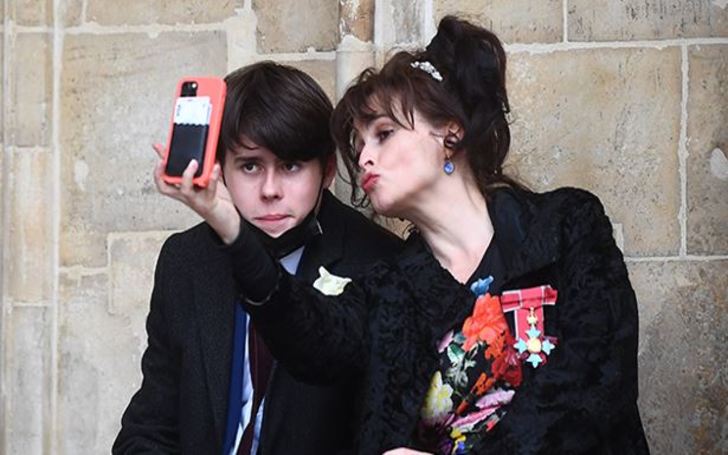 The first child of Bonham Carter and Burton is a Gen Z and now a teenager. But is he all into today’s internet fame or does he simply prefer to live off the radar? Also how close is he to his director’s father and an actress mother?

Not to forget, is Billy thinking of following in his father’s footsteps? Know all these along with some other facts relating to the son of one of Hollywood’s famous parents.

Billy Raymond Burton Is Of Spanish And Jewish Descent

Raymond Burton was born on Saturday, October 4, 2003, in London, England. His maternal grandfather was from a well-known British political family.

Burton’s grandfather was a merchant banker and worked as the alternative British director representing the Bank of England at the International Monetary Fund in Washington, D.C., during the 1960s.

In like manner, Billy’s maternal grandmother Elena is a psychotherapist. His grandmother who is also Bonham Carter’s mother had a nervous breakdown and was ill for three years. She has Spanish and mostly Jewish ancestry. Raymond’s maternal great-grandparents were diplomat Eduardo Propper de Callejón from Spain and painter Baroness Hélène Fould-Springer.

On the other hand, Billy’s late paternal grandfather, William “Bill” Burton (1930–2000) was a former minor league baseball player who served at the Burbank Parks and Recreation Department. From his father’s side, Billy has a bit of German, Norwegian, Croatian, Polish, Russian, and Swedish lineage.

For his filmmaking, Tim has received nominations for two Academy and three BAFTA and wins for an Emmy and a Golden Globe.

Likewise, Billy’s mother, Helena Bonham Carter, is known for her work in independent films and large-scale blockbusters. Some of the films that made her a star include Hamlet, Howards End, Mary Shelley’s Frankenstein, Mighty Aphrodite, Fight Club, Wallace & Gromit: The Curse of the Were-Rabbit, and the Harry Potter series.

He Appeared In Films At 2; So Far He Has Been In Four Movies

Burton began appearing in silver screens way before he could even have his own consciousness. He has portrayed a Baby in Stroller in Charlie and the Chocolate Factory (age 2), and a Boy at Beach in Sweeney Todd: The Demon Barber of Fleet Street.

Additionally, he is also the Boy at Dock in Alice in Wonderland, a Boy at Train Station in Dark Shadows, and a Boy at Park in Big Eyes.

The Hollywood Walk Of Fame actor, Johnny Depp, who is also Tim Burton’s constant star and a longtime friend, is the godfather to his children Billy Burton. Depp has long been close to both Nell’s parents since Edward Scissorhands. The actor has remained close with Tim and Helena for over 30 years and has worked together in countless films.

Ironically, despite being friends for that long, Tim still hesitated to directly ask Depp to become his son’s godfather. Billy’s father was having a conversation with Johnny during the filming of Charlie And The Chocolate Factory. The filmmaker, however, couldn’t approach his lead star to become his boy’s godfather.

So, a couple of minutes later, Tim’s then-girlfriend, Bonham Carter, spoke with Johhny on the phone on her ex-partner’s behalf. In the end, the Pirates Of The Caribbean star not only became Billy’s godparent but also his sister’s, Nell Burton.

When Raymond Burton was 3 1/2, his mother Bonham Carter decided to take her for viewing of Harry Potter and the Order Of Phoenix.

Unfortunately, Burton was too young to find the wizarding world charming and exciting. Billy’s mother revealed how her toddler son experienced a jolt of trauma when in the movie, he saw his mom blowing up into a huge balloon and floating out of the window. “That was really traumatic! It was a mistake.”

Nell has seven cousins, all through his actress mother’s side. Bonham Carter’s nephews and nieces include Rosie, Maud Vanna, Tobias, Fred, Harry, Matilda, and George. Rosie Bonham Carter is also an actress and is known for films like The Heart Of Me 2002 and 2006 Home of The Brave (as an art director).

Billy’s other cousin, Fred is also in the film industry. He primarily works as a floor and set runner as well as an assistant director. Fred has been an additional crew member in films like The Take, The Danish Girl, Cinderella, and Burnt.

Does Billy Burton Have A Girlfriend?

What’s tricky about this question is the fact that much like Bonham Carter and Burton, Billy seems to keep his personal affairs to himself only. It’s only a surprise that despite being a teenager, Tim and Helena’s son, Raymond is nowhere to be seen over the internet-famous portals like Facebook, Insta, or Twitter.

Either that or the once child actor is choosing not to be extrovert with the outer world just yet. Accordingly, it’s hard to tell if Billy is involved in any romantic affiliation.

Who is Kevin Bacon’s Son Travis Bacon? What Does He Do for a Living?