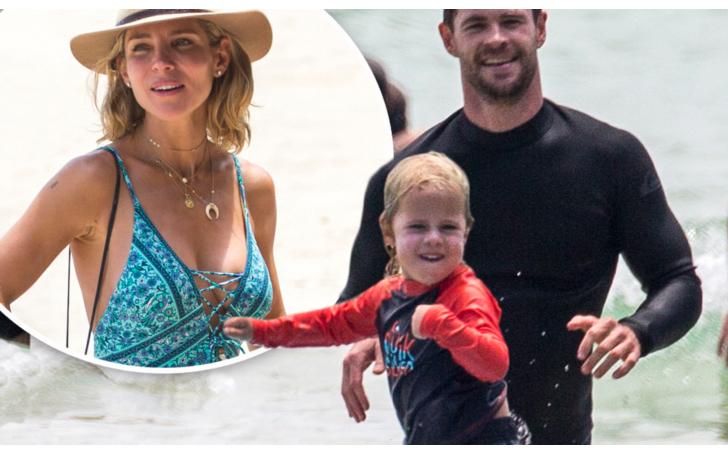 Sasha Hemsworth is a star kid. He is one of two sons between Australian actor Chris Hemsworth and actress Elsa Pataky. Both of Sasha’s parents are renowned actors of this generation.

Speaking of which, Chris has become a prominent figure in the entertainment world, all thanks to his work in the Marvel cinematic universe, portraying the role of Thor. On the other hand, Elsa is also a big actor in her own right.

Here today we are going to talk in brief about Chris Hemsworth’s twin son Sasha Hemsworth and find facts about him!

He was born on March 18th, 2014, in Los Angeles, California. Sasha belongs to the Australian-Spanish nationality and has a mixed ethnicity of Caucasian and Hispanic.

Talking about his education, Sasha is currently studying in a primary school in Australia. When his father was shooting for Thor in Australia, Sasha studied alongside Natalie Portman’s kids in the same school.

How old is Sasha Hemsworth?

Sasha has one older sister named, India Hemsworth, born on May 11, 2012. She was born in London, the UK. Now we’re sure you might be curious to know what is the meaning behind her name so allow us to tell you. In an interview with IANS Chris said, “My wife (Elsa Pataky) spent lot of time in India and that was where the name originally came from.”

Apart from his older sister, Sasha has one twin brother, Tristan Hemsworth, born on March 18th, 2014. As if it isn’t obvious enough, Tristan and Sasha both are twins. All three of Hemsworth’s siblings are raised in a close-knit family.

Going through their parent’s social media handles, Sasha, Tristan, and India are enjoying their life.

Thor’s hammer is something that is quite unique and not just Marvel fans but everyone wants to get their hands on it. Call it perks of being a star kid, Sasha alongside his brother Tristan and sis, India plays all the time with the hammer. Yes, the same hammer that was used in the film.

While talking about how the hammer often finds its way around his kids’ toys, Chris said, “It kind of varies in its location from the toy box to the mantlepiece. It quickly gets taken off there and ends up in the bathroom.”

The lovebirds first met each other in early 2010 when talent agent William Ward introduced them to one another. After their introduction, they came out in the public, in September of the same year at a red carpet event. Talking about how their relationship began, Chris said in an interview with Elle,

“From the first time we met, we just made sense. She’s fun. She’s outgoing, and she has a sense of humor and a passionate attitude toward life, which is nice to try to keep up with.”

Subsequently, a couple of months after making their relationship official, the lovebirds exchanged vows on December 26th, 2010. Their nuptial was kept incredibly secretive.

Since marrying, there hasn’t been a single occasion when the pair’s relationship was tested. Regardless of how busy they are in their professional life, they always make time for their small family. What’s more, Chris is a doting husband and a dad who whenever has free time will take his family out for an exotic vacation.

Sasha Hemsworth’s father Chris wants his kids to like ‘Thor’

We all know that of all the movies that Chris played, his work as Thor in Marvel Cinematic Universe helped him become famous globally. His 6ft 2 inches Greek-God-like body made him a perfect fit for the role of the Asgardian Thunder of God. So him being a superhero, it is only natural he wants his kids to love only his character and not other superheroes.

But it looks like you can’t control everything as one of Chris’s twin sons loves Superman. In an Instagram photo that Chris shared, he revealed that his son wants to become a superman. Though we felt bad for Chris, the caption made us all laugh our hearts out. Check it out!

Just like Chris said in the caption, thankfully, he has two other kids.

This is an age-old question, which many of us are really eager to know the answer to. When you are a successful actor it is not a surprise that everyone wants to know if your kids will tread the same path as you.

Though we can’t answer the question yet as all three of Hemsworth’s siblings are still kids, Sasha and his brother Tristan have made their big-screen debut. Both of them worked together with dad in Thor: Love & Thunder. Further, both of the boys also attended the premiere of the movie alongside their daddy and mommy.

Whatever the circumstances that may have led to Sash and Tristan’s working in the movie, we sure hope they become actors just like their parents.

How much is Sasha Hemsworth net worth?

As a star kid, he enjoys a relatively lavish and exquisite life. His father Chris has a hefty net worth of $130 million, while his mom Elsa is worth $50 million. The family of five lives the majority of the time in Australia.