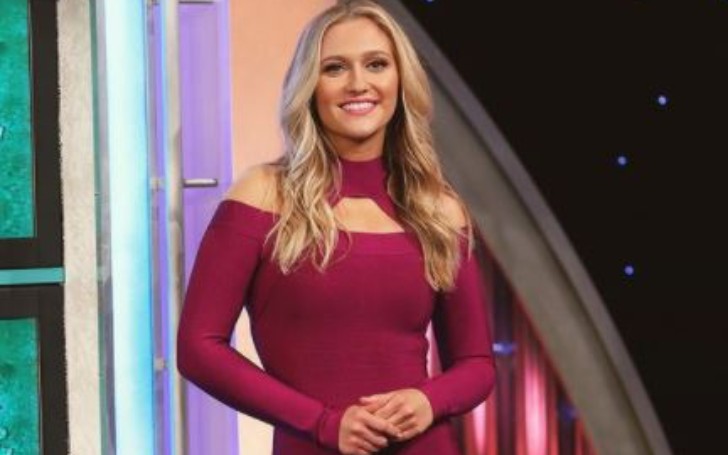 Maggie Sajak, Wheel of Fortune host Pat Sajak‘s daughter with Lesly Brown, has made a name for herself outside of her dad’s shadow. We’re sure many of you might’ve thought she will most definitely follow in her father’s footsteps and she did. She currently works in the same show which made her father famous.

Aside from working in the show, Maggie is also a renowned country music singer. Moreover, she is also a student of law, so there are chances she might become a lawyer someday. Whatever the case may be, we can say she is a multi-talented individual.

In today’s article let’s take a close look at the life of Maggie Sajak. We will try to uncover her dating life and many other interesting facts!

Pat Sajak’s daughter Maggie Sajak: She grew up in Maryland

She was born on January 5th, 1995, in Maryland. Pat shares Maggie with his second wife, Lesly, whom he married in 1989. She is the second child between the duo. Her mother and father brought her up in the Severna Park area of Maryland.

Maggie belongs to the Caucasian ethnicity and has American nationality. Moreover, she comes from a mixed ancestry of Polish, Irish, English, and Scottish.

Besides, many of you might be curious to know if Maggie is her nickname or what. Well, to our surprise, her birth name is indeed Maggie and it isn’t short for any other name. She has clearly mentioned on her Instagram account bio that her name is not short for Margaret or any other name for that matter.

Her mom and dad gave birth to her older brother, Patrick Michael James Jr., on September 22nd, 1990. Unlike Maggie, who is quite comfortable in front of the cameras and whatnot, her big brother doesn’t like any attention.

Patrick leads a fairly normal life and rarely ever appears in public with his family members. Though he is active on social media, all of them have been kept on private. This really proves that he wants no meddling in his private life by anyone except his friends and family.

The only thing we do know about the star kid is that he loves sports, especially Golf, Ice Hockey, and Baseball.

Maggie is quite close to her big bro and often shares pictures with him on her Instagram account. This is the only way we get to see Pat Jr. as he himself has rarely ever come out in public.

Maggie Sajak’s Professional Life: What is she doing nowadays?

At the moment, she is working as Wheels of Fortune’s online media correspondent. Her job description, as described by herself, is “bring an insider’s look at the show with new behind-the-scenes features, interviews, videos, and insights.”

In addition to that, she also filled in for her father in the second week of January 2020 as her dad was recovering from surgery. She didn’t necessarily overtake her father’s role as a host but instead as the letter turner which was played by Vanna White. Vanna became the host for the week.

Apart from her work in the show, Maggie is also a talented singer, who primarily sings country music, though she is not much active nowadays. From her early adolescence days, she was interested in music. She learned to play guitar at the age of 12 and released her first single, First Kiss at 16.

Wait, there’s more. Maggie also tried her hands in the modeling department just like her mom. In 2013, she did a photoshoot for the Teen Vogue magazine wearing laid-back denim styles.

One would say that star kids are spoiled and aren’t as well-read as others are. Maggie here has broken all the stereotypes. Not only is she is a graduate, but that too from one of the best colleges in the world.

She did her bachelor’s from the Princeton University and post-graduated from the Columbia University. But wait she isn’t finished yet. After finishing up her post-graduate, she joined the law program.

Safe to say, Maggie, takes the world multi-talented to the next level.

Is Maggie Sajak dating? Who is her boyfriend?

Yes, Maggie is in a relationship. She is dating a guy named Sean Tuohy. Her boyfriend is a coach who currently works at UCF Football.

The couple has been dating since February 2020. Apparently, they first met around the time when Corona first came out in early 2020. Unfortunately, after the lockdown set in, they weren’t able to physically meet.

Despite all the odds, the pair stood together, and even after months of social distancing, they are still together. Both of them like to celebrate every small thing together. For instance, back in March 2020, they celebrated their one-month anniversary.

Well, they truly are a blissful couple. Here’s hoping they get married soon.

How much is Maggie Sajak’s net worth?

Her net worth as of now would be somewhere around $250,000. On the other hand, her father Pat is worth an astounding $70 million. Pat gets paid $15 million as his annual salary.

Moreover, while growing up, Maggie didn’t have to worry about anything as her father was already a millionaire by the time she was born. It wouldn’t be an understatement to say that she lived a fairly lavish life.