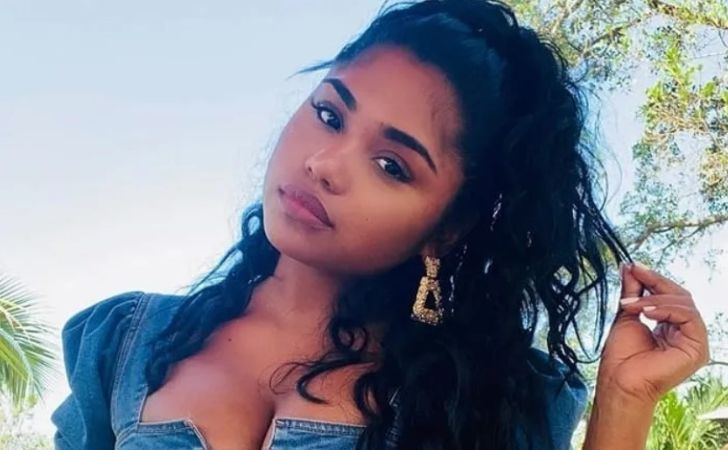 Vanessa Posso or often called Nessa Colombiana is a jewelry hustler, businesswoman, model, and designer who has an online store providing body chains and sterling silver jewelry. Posso also sort of became a big name for her past relationships with the WBA lightweight champion boxer Gervanto Davis and the Atlanta-based rapper Meek Mill. She is the founder of a jewelry line Its Rich Girlz, which is a collection of fancy earrings, bracelets, rings, and necklaces; designed for both males and females.

Some recognizable names who have donned her arts are the VH1’s very own Basketball Wife Draya, Trey Songz, Lauren London, DJ Prostyle, Sophia Marie, and others. The New York native, Vanessa is a bonafide boss woman in her own right, garnering a worldwide clientele through her thriving jewelry line, Rich Girlz.

She has seemingly turned her passion into her paycheck, building a lucrative business, all on the account of her undying love for jewelry and accessories. Working her way to the peak of the entrepreneurial world, the businesswoman/fashion designer, Posso is making power moves, all across the board. Learn more about her in the ensuing headings; from her early life to her relationships and all about her business.

What Is Vanessa Posso’s Nationality?

While some claim Vanessa who was born on May 30, 1988, is from Colombia by birth, many suggest she is a native of New York.

Vanessa Posso’s Jewelry Business And How She Started?

As mentioned, Posso is the founder of her very own jewelry line Its Rich Girlz, which is a collection of fancy earrings, bracelets, rings, and necklaces; designed for both males and females.

The collection features everything from stylish body chains to chokers. Some of them are specially made with stainless steel and gold-dipped.

One could see her collection on celebrities from VH1’s very own Basketball Wife Draya, Trey Songz, Lauren London, DJ Prostyle, Sophia Marie, and Esther Baxter during the KING Magazine’s cover shoot for the July 2011 issue. Posso states Rich Girlz serves as a way for her to provide quality pieces to complement her wardrobe.

The now 34 years old Posso decided to make a career out of jewelry at age 22 in 2010. She did take a craft class to learn the basics as one of her jewelry-making classes.

Vanessa once explained the reason she chose jewelry as her career was because of her ever-so nature as an accessory junkie. In an interview, Posso said she always had had the possession of Big hoops, big bangles, and big rings.

So, she eventually thought why not OWN a boutique with FLY accessories.

Posso says her own style inspired her to pursue jewelry; she always used to wear big hoop earrings with bling, big bamboo earrings. Her signature collections are “The RICHsquarez hoops and Square bangles.”

Some of the pieces which she considers the most popular are her signature line “Richsquarez.”

People can see it on Draya in BBWLA (Basketball Wives Los Angeles). Likewise, others include The Tibetan hoop, The Upscalez, and reportedly the Square bangles are also in high demand.

Vanessa though says her favorites are her pink Richsquarez and the Richwood hoop. Posso works with other female designers for her jewelry making. She once also revealed how she has a good probability of joining the fashion industry.

Davis and Posso had been linked romantically in the public since late 2019 or early 2020. They had their first child, a daughter, Giovanna Thalia Davis in Oct 2021.

When introducing their baby, Posso’s former partner shared on Instagram Story a photo of him smiling to the camera as he cradled the infant. On the top of the image, Gervonta wrote, “Blessing.”

In the picture, one can also see Vanessa sitting in front of him. She also shared a picture of her then-new born on her Instagram; more precisely a black-and-white picture of her hand holding her then-infant baby.

Why Did Vanessa Posso And Gervaonta Break Up?

Posso and Davis ended their relationship shortly after welcoming their first child. They most presumably broke up because of Gervonta’s cheating scandal.

In fact, back in April 2021, Gervonta himself admitted to having an affair behind Posso’s back. As such amidst the cheating scandal, on his Instagram story, he had written,

He also publicly begged Nessa to “come home.” Following the confession, Vanessa, on her own account, penned,

“I HATE my lurking skills I be finding exactly what I’m looking for… Including the whole family and GMA don’t play.”

Gervonta, however, denied that he was the one who posted the confession.

He claimed, “None of that bulls**t was me.” Many Internet users, though, didn’t believe him because both the aforesaid posts featured the same font and color. Posso’s baby father, Gervonta apparently cheated on her with a Houston model named Slim Marie.

Earlier Marie had also made headlines when in May 2020 her 5 years old son died after drowning in Carl Crawford’s home pool.

On the other hand, reports claim Posso decided to end things with Gervonta after she had found out he might have been creeping with Bernice Burgos’ daughter Ashley. And when Ashley found out Posso accusing her, she went on Instagram to challenge Gervonta’s baby mother to a fight.

They apparently also tried to meet up in LA to throw hands.

Sometime after they had broken up, Posso accused Gervonta of creating a fake id to text her repeatedly. In one of her stories, addressing the issue, she wrote,

“I never met a person so weak to the point they have to create a fake page like everyday cmon bro. And then message me from the pages and unsend the messages, bye..”

The Instagram model had also stated, “Grow up Gervonta with your weak a** fake pages you and your whole crew weak asf!!” It nonetheless remains unclear what caused Gervonta and Vanessa to end their relationship in the first place.

Vanessa Posso Has One More Daughter

In addition to her daughter with Gevanto, Posso also has one more daughter, Jada Milan. Milan who is apparently now in her pre-teen has a bit of a mystery as Vanessa has never revealed who this baby’s father is.

Nevertheless, Posso hopes to instill her hard work and hustle into her daughter, Jada. As a matter of fact, Nessa has created the Jada Milan Collection where Jada herself picks and designs.

This collection by Milan’s name includes everything from fashionable jackets, tops, and bottoms to kids’ jewelry and more. Further, Jada also has an Instagram for her clothing line which has over 70K followers.

Before, Gervonta, Vanessa used to date Meek Mill, the Going Bad singer. The two though had a complicated relationship.

They were mostly on-and-off couples. Sources claim Nessa and Mill’s relationship started to experience rifts after the former began to date Gervonta Davis behind Meek’s back.

In fact, after the breakup, Meek Mill shared cryptic posts on social media all with respect to women and relationships. He also accused Davis of stealing his girlfriend.

Saving for the fact that the conclusive reckonings of Posso’s net worth are yet to get out in the open, from the looks of her mode of living on her Insta, Vanessa essentially comes off as a well-off celebrity.

A swift glance at her social media posts and one might have a hard time denying she is still a struggling model.

In addition to her own brand, Posso also posts about other brand collaborations on her social handles. She has over 700K Instagram followers though which has recently gone off the radar; so far, she has promoted Bay Harbour, Perfection, Reservedrow, and others.