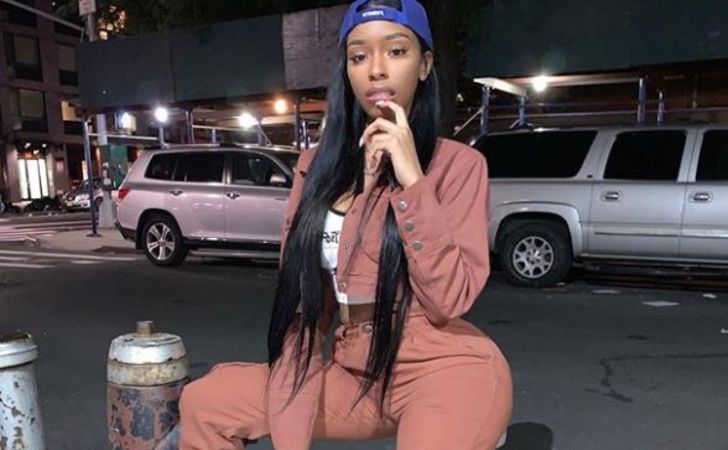 Ashley Burgos, also known as Amarie Burgos, is a social media star with huge authority on Instagram. She is also widely recognized as the daughter of model and entrepreneur Bernice Burgos.

Apart from a career in social media, Bernice’s daughter Ashley is also a business person and is the owner of a sleepwear brand. Besides her successful professional life, Ashley is also a mother to a baby girl. So, who is the father of her child? Also, know about her dating history and boyfriend in the following article!

Find out all the details on Ashley Burgos’ career, relationship, children, and more.

Ashley Burgos Was Born To a 16 Years Old Mom; Who is Her Father?

Instagram model Ashley Burgos was born on May 9, 1996, in New York City. Her mother Bernice Burgos was just a 16-year-old teenager at the time of her birth. Likewise, her father was a guy from the street who Bernice was dating at the time.

In a conversation at the Breakfast Club, Bernice revealed how she was a baby having a baby and had a tough time as a teenage mother. The father of the child, on the other hand, was a 19-year-old guy.

She Has a Younger Sister

Ashley also has a younger sister Sarai Burgos. She is just 15 years old school-going kid and is 10 years younger than her. Unlike her mother and sister, Sarai is not into social media.

Needless to mention, Burgos shares a great relationship with her younger sibling.

Talking about the professional part of Ashley Burgos’s life, she is a successful model. With over 231k followers on Instagram, she is a decently successful Instagram model and a social media influencer.

As a model, she has worked with big brands and has also featured in some popular magazines. Reportedly, the 26 years old has appeared on the cover of Elle, Harper’s Bazaar, and Marie Claire as well.

She Is The Owner of a Fitness Brand

Besides having a successful career as a social media influencer, Bernice’s daughter Burgos is also a business person. She is the owner of the fashion and fitness brand Miracle Fitness.

The fitness brand is also co-owned by her mother Bernice. Well, Miracle Fitness mostly focuses on helping out all those dreaming to have a perfect waistline. The brand also produces different products that include waist trainers, arm, and thigh slimmers, sweat belts, slimming creams, and detox teas.

Ashley is a singer Too

In addition to being a social media influencer and businesswoman, Ashley is also an aspiring singer. In December 2022, she also released her single “back on the market.” She also announced her single on her Instagram with a photo of herself and wrote,

“My single “back on the market” is out yall on all platforms!!! Go stream my sh#t puhhhlease.”

As a social media star, Ashley Burgos is very active on social media platforms. She is most active on Instagram and has around 231k followers on her Instagram, where she goes by #realamarie.

His Instagram post is mostly fashion photoshoots. Further, her posts also give an insight into her personal life.

Ashley Is a Mother Of a Daughter

The beautiful Ashley Burgos is also a mother of a 5-year-old daughter, India Ava Aisha. She gave birth to her first child in February 2018, when she was just 21 years of age.

Though a young mother, Ashley pretty well tasks care of her newborn. Moreover, she shares a great relationship with her daughter.

In fact, she often posts several photos of her on her socials and the newborn seems to enjoy being clicked on. As a matter of fact, India has her own Instagram account, with several beautiful pics of hers. As of now, Ashley’s child India has 9.5k followers on her Instagram.

But the one question that must be haunting you is who is Ashley’s baby’s father?

Is Ashley Burgos Married or Dating a Boyfriend? Know About Her Baby’s Father

We are still a bit skeptical if Bernice’s daughter Ashley is married, but she is definitely in a relationship. As per the report, she is dating a guy named Bubba (aka Sambou Bubba Camara), who is also the father of her child India.

In fact, Buba has even posted a few photos of his little one on his Instagram. Just a few months after the birth of Ashley, she posted a photo of him holding her newborn daughter. Check out the post here.

The way she looks at him clearly reflects the love he has for his kid.

Burgos Has a Great Relationship With her Boyfriend Bubba

Ashley shares a beautiful relationship with her boyfriend. It looks like the couple is together for a while now, however the exact details of when they began dating are not known.

Besides, her partner Bubba, who is a businessman by profession has been with his girlfriend Ashley all through her pregnancy. They were seen together multiple times on several occasions.

Well, Burgos is still together with her boyfriend Bubba, and they seem pretty happy in their relationship. But are they planning to get married? As for now, it seems, they are not looking to get married.

Anyway, we would love to see them tie the knot.

Prior to Bubba, there isn’t much about the details of Ashley’s past love affairs. But, back in April 2021, there were rumors that the social media influencer was dating a boxer Gervonta Davis, a former boyfriend of Vanessa Posso.

But, later it turned out to be fake.

Ashley Burgos Is a Tattoo Lover

Like most of the celebrities out there, Ashley is also a huge tattoo lover. In fact, she keeps getting a new tattoo every now and then.

While she has not talked about the meaning of all the tattoos she has got but hopefully, we will get to hear the story soon.

Well, she has inked on her back, inner thighs, upper arms, legs, and waist, and we will probably get to see a lot more in near future.

Her Mother Bernice Burgos Is a Successful Model & Entrepreneur

Like Ashley, her mother is also a model and pretty successful in the field. Besides, she is an entrepreneur as well. AS a mother her mother has appeared in numerous successful music videos as well.

Some of the successful music videos she has appeared in include Coles’s “Work Out,” and DJ Khaled’s “Do You Mind.

Further in the year 2009, she made a full-fledged appearance in the film Notorious. This was again followed by her appearance in MTV’s “Wild ‘N Out.”

Moreover, she also works with some successful brands as a model, Fashion Nova being the major one her. Apart from this, she runs her own venture and is the owner of a brand named Bold & Beautiful, which focuses on comfy and stylish sleepwear.

Along with him, she is also the co-owner of the fitness brand, Miracle Fitness, along with her oldest daughter.

Roux Lopez: All About Becky Lynch And Seth Rollins Daughter