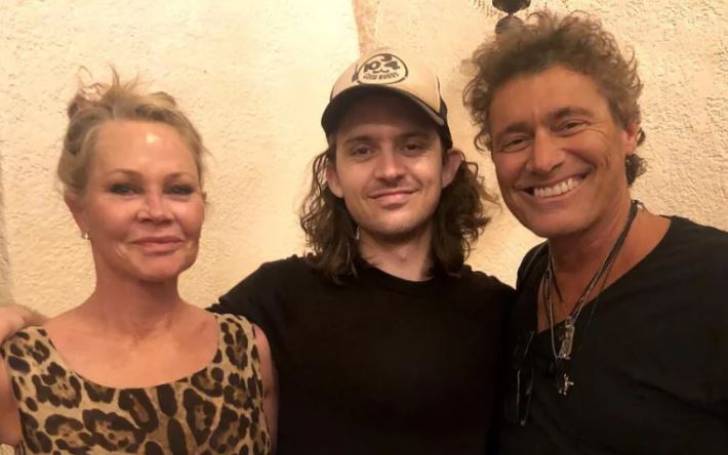 Alexander Bauer is an American star kid and media personality born to famous parents Melanie Griffith and Steven Bauer. He is the only child of his actor parents. Apart from his family name, Bauer is popular for his roles in films and shows like Kazoo’s on First?, Holding, and This Loneliness.

The star kid’s father Steven Bauer is popular for ¿Qué Pasa, USA?, Wise Guy,  Breaking Bad, Ray Donovan, and many more. Similarly, his mother Melanie Griffith is popular for Working Girl, Buffalo Girls, Shining Through, Another Day in Paradise, and others.

Today we will try to unveil details of Alexander Bauer’s family, career achievements, earnings, girlfriend, and more. Stay tuned with us to know more about Steven and Melanie’s not-so-famous child.

Alexander Bauer Is His Parents’ Only Child

The low-key actor Alexander Bauer was born under the birth sign Leo on 22nd August 1985. As mentioned above, he is the only child from Steven and Melanie Griffith’s marriage. Likewise, his godmother is Warren Beatty.

Bauer is 36 years old in 2022. Likewise, he was born and raised in Los Angeles, California. As for his education, no official details of his schooling are revealed at the moment.

Alexander has mixed ancestry. He is Jewish from his father’s side and has English, Irish, Welsh, Scottish, as well as Scots-Irish/Northern Irish ancestry.

Bauer Has Three Half Siblings

Though the film performer is his parent’s only child, he grew up alongside his three half-siblings, Stella Banderas b. in Marbella, Spain, Dylan Bauer, and none other than actress Dakota Johnson.

Born on 24th September 1996, Stella Del Carmen Banderas Griffith is 26 years old in 2022. As per Banderas’ IG, she is the founder of Lightbound Studio. Likewise, she has also created her own perfume as well.

Unlike her brothers, Stella has made a name for herself in the industry. And it is of no surprise that her success can be credited to her parent’s name. However, things took a new turn when Stella Del Carmen announced to drop her mother’s surname ‘Griffith’.

Back in 2021, the then 25-year-old even filed a name change petition asking a judge to remove Griffith in a Los Angeles court. And absurdly, she reasoned her name change writing “to shorten my name by removing the extra last name”.

“As well, I typically do not use “Griffith” when referring to myself or on documents so, dropping the name would match my regular use.”

Although the petition raised a few eyebrows regarding the mother-daughter relationship, it appears that there’s no such issue and Carmen simply wants to shorten her name.

Alexander Bauer Is An Actor & Businessman

The 36-year-old star kid is an actor and reportedly a businessman by profession. He made his cinematographic debut with the short comedy video Kazoos on First? in 2013.

Two years later, he landed his debut acting role as a sidekick in the 2015 comedy-drama film This Loneliness starring Corey Smith, Breann Thorne, C.B. Jacobson, and others.

Despite having a family background of actors, Alexander didn’t make a name for himself in the industry. Instead, he works behind the camera.

As per his IMDB profile, he has a second assistant cameraman credit for his name for This Loneliness and Holding. Apart from this, not much about his current profession is known to the public.

Alexander’s mother found love for the second time with Steven Bauer after her divorce from her first husband. And eventually, Melanie and Steven got married on 8th September 1981 amidst family and friends.

They welcomed their only child Alex on 22nd August 1985 and lived a blissful life. Although the former couple parted ways in 1981, they are still very good friends.

The actor pair even went to her film Dark Tourist’s premiere hand-in-hand back in 2013. Looking at the moments they shared during the event, we can say that Steven and Melanie are still each other’s soulmates.

A few months after her divorce from the Scarface actor Steven, Griffith exchanged her wedding vows with Don Johnson on 26th June 1989 for the second time. This time, Don and Melanie lasted for eight years.

Griffith shares a daughter, Dakota Johnson b. 4th October 1989 in Austin, Texas, the USA. Sadly, the second wedding was also not the charm for Don and Melanie as they got divorced in January 1996.

Not to forget, the then-husband-wife was married only for six months and went separate ways during their first wedding back in 1976.

Griffith tried her luck in marriage for the third time with actor Antonio Banderas on 14th May 1996. While together, they welcomed a daughter, Stella Del Carmen Banderas Griffith. They got divorced on 4th December 2015.

Note: Don was previously married to Kelley Phleger, with whom he has three kids Grace, Jasper, & Deacon.

Is Alexander Bauer Dating Someone Now?

Unlike his famous celebrity parents, Alexander has been living most of his life away from the limelight and media. The only time we can see Alex on the internet is when his mother Melanie uploads his picture.

That being said, Bauer is reportedly single. Similarly, information regarding his wedding or an alleged relationship has not surfaced on the internet so far.

Talking about his parents, both of his parents are single and maintain a good relationship with their respective ex-spouses.

What Is His Current Net Worth?

As Bauer’s current profession is not known, so is his fortune. However, some other sources estimated his net worth around $500 thousand in mid-2022. A decade back, he worked as an actor as well as an assistant cameraman.