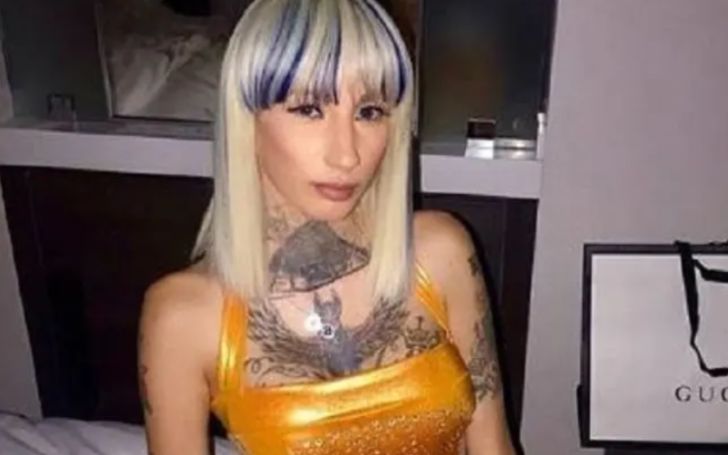 Kat Stacks is the most controversial name on the Internet in America. She is a Venezuelan, who migrated to the US at a very young age and started out her career as a prostitute. Today, Stacks is best known in the Hip-Hop industry as a model and vlogger.

There is something else that identifies Kat in the US rap industry. Can you guess what that is? People know her best as a woman who’s had multiple relationships with famous rappers in America. We’ll talk in detail about her lengthy dating life in the article below.

Also, know what is her real name? Is it true that Kat became a sex worker at just 14? Let’s find out together!

Kat Stacks Was Born in Caracas, Venezuela; Her Early Life

Kat Stacks was born with the name, Andrea Herrera on 2nd November 1989. Recently, in 2022, Stacks celebrated her 33rd birthday. Her birthplace is the capital of Venezuela i.e., Caracas. At the age of 8, the vlogger and her family migrated to the US and settled in Miami, Florida.

However, little Stacks was very unfortunate to grow up in a troubled household.

Who Are Kat Stacks’ Parents? Information On Her Upbringing

As mentioned earlier, 33-year-old Stacks had a very unsettling childhood. We aren’t quite aware of the names of her parents, but it is certain that after migrating to the US, Kat lived with her mother, grandmother, and two uncles. So, what about her dad? We can guess that her dad was out of the equation before her family moved to Florida.

In fact, Kat never got to spend much time with her while living with her mother. Her mom would be out on most days, leaving this young girl under the care of her old and mentally challenged grandma.

In multiple interviews, she has even expressed how absent her family was when she needed them the most. Therefore, we can only imagine how hard her life was in the early days.

Stacks Went Into Prostitution At A Young Age Of 14

Young Stacks’ family’s socio-economic condition was very poor since the very beginning. On top of this, with both her parents absent from her life and her being left alone with her mentally unfit grandmother, Andrea was just looking for a way out. Thus, at the young age of 14, she chose prostitution.

As it turns out, she left her family in Miami and moved to Brooklyn, NYC with a pimp. Many believe that it was a very bad decision since all her trouble began after moving away.

14-year-old Herrera was subjected to physical and mental abuse by the man (pimp) she trusted the most. In addition, she also got pregnant at a very young age and was abandoned by him.

Also Read: Celebrities Were Victims of Sexual Abuse As A Child

At the age of 19, Kat Stacks was pregnant and arrested by the authorities for the illegal possession of a gun. However, she was released shortly after, once her mother signed for bail under one condition; she had to be kept under house arrest. This was the beginning of a new life for a troubled teen like Stacks.

A home, all she did was surf the Internet. Soon, she joined hands with the head of World Star Hip-Hop and began talking about different rappers. In most of her videos, she would insult them and reveal their “bedroom secrets.” This drew the attention of many viewers toward her, and she officially became a vlogger.

This job of hers became a threat to most of the rappers in the Hip-Hop industry. As she also dated a few of them, she would talk about how they were abusive and violent.

Thus, later, it became a platform for her to share her side of the story. People became more sympathetic towards her and got to know the real “Hip-Hop World” of America. Most of these videos even went viral on YouTube.

Kat Stacks Is Also An Author

By now, it is certain that Andrea Herrera was a victim of domestic violence and abuse in the past. In addition to this, she was a troubled teen who became a sex worker at the age of 14 and pregnant at 19. Despite everything, she moved on and made the best out of anything she could get.

Thus, in 2013, Kat Stacks wrote the book Admire Andrea: Surviving Savagery To Saving Lives, an autobiography based on her life with the help of Tessie Patrick. It contains explicit information on her whole life as a sex worker and victim of domestic violence, and the truth about her job in the American Hip-Hop industry.

The book, however, did not release as she had originally planned.

What Is Kat Stacks’ Dating Life Like? Her Boyfriend Lists

Besides the fame vlogging has brought into her life, Stacks is famous for having relationships with multiple famous men in the US. The list of her lovers continues to have over 32 men.

Sources confirm that this lady vlogger was in three serious, yet short-lived relationships while having several other encounters. She dated her ex-late boyfriend Yung Mazi for a year from 2015-2016. A year after, her then-partner Yung was shot and killed in the area’s Kirkwood community in August 2017.

Stacks was then in a relationship with Brandon Richardson and Kimrick Lewis. Similarly, Gucci Mane, T-Pain, Lil Za, and Shad Moss are some of the men on the list of 32 others. Kat had something going on with them at some point in her life.

Herrera’s Toxic Relationship With The Pimp; Information On Her Kid

In 2003, Andrea left her family in Florida and moved to New York with a man. We do not know the actual name of the guy but everyone seems to be calling him “pimp.” Kat was very young at the time and things started moving south.

At just 14 years old, she was pushed into prostitution and the pimp started to physically and mentally abuse her. Even more so, he abandoned her when she was pregnant with his son.

Following this, Kat Stacks was arrested at 19 and after her release, she moved to live with her family in Miami, Florida. By now, the pimp was long gone from her life.

Shortly after, she gave birth to her son, T.J. Neither. Although his exact date of birth is yet to be known to people, we believe that he entered the world somewhere in 2003-2004.

His mother, the famous Hip-Hop vlogger has protected her son and kept him under the radar since the very beginning.

Where Is Kat Stacks Today?

Stacks isn’t active as much nowadays. Therefore, it is also uncertain whether she lives in Miami with her family or alone today. There is also no information on her current love interest over the Internet.

However, in 2021, she did make a public appearance while interviewing with No Jumper. Even there, she talked about the struggles she faced in life and about Hip-Hop/Rap.

So, regardless of wherever she might be today, we hope she’s living a happy life with her son, T.J. who must be in his teen years by now.