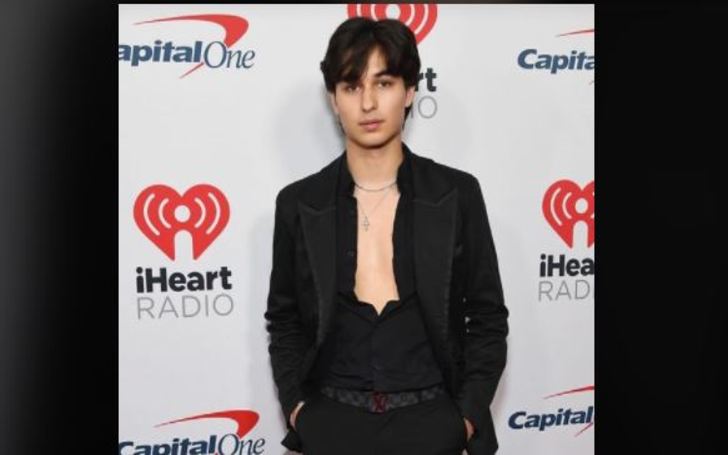 Kio Cyr is a twitch streamer, youtuber, and a TikToker. He is famous for his lip-synchronized, change, patterns, challenges, and different recordings. Further, he is also an actor known for works in TV shows like Rooney’s Last Roll, & Attaway General.

Cyr boasts a huge presence on several social media platforms; with over 9 million followers on TikTok, combine likes tallying a little less than half a billion and close to 400k YouTube subscribers. He is also equally prominent over Instagram, Facebook, and Twitter.

Know all about his origin, the early moments as an Internet star, his girlfriends, his professional pursuits, and all the other unknown facts down in the headings.

His mother is Thai and his father is of French Canadian heritage. In the first Q&A video on his YouTube channel, the now 21-year-old, Kio revealed his mom is Thai, and his dad is French Canadian.

He’s also the CEO of “the Look.” His other brand, Lacuna Apparel with a  bear on its logo provides hoodies and t-shirts.

As of late, Cyr, a Virgo is dating fellow influencer and model, Amanda Diaz, a native of Los Angeles. Apparently, their relationship is as serious as the couple’s attending each other’s Thanksgiving dinners.

Although in the beginning, they kept on denying the rumors of them dating each other,  in Sep 2021, on Cyr’s 21st birthday, Diaz put to the rock that they had indeed become a thing.

Wishing her boyfriend, the Instagram model with over 1m followers wrote,

“My favorite boy turned 21 today ❤️ Wishing you the happiest of birthdays.”

As for Kio, he went Ig official with Diaz on Sep 22, the same year, via posting a series of images of him and his brunette girlfriend enjoying their weekend in Las Vegas.

Kio Cyr Famously Dated Olivia Ponton In The Past

Before Diaz, Kio was in a romantic relationship with a model named Olivia Ponton. They initially denied their relationship but later went on to declare it anyway when they kissed each other in one of Kio’s Q&A videos in March 2020.

Cyr’s chapter with Ponton was one of his famous. They allegedly had started dating in Feb 2020 but stopped being a couple by June 2020. Seventeen reports, Ponton and Cyr’s dating rumors started when the latter “visit[ed] Olivia at her house in Florida in their first TikTok together.” For months, the two exchanged a series of flirtatious activities with each other all in front of their fans via TikTok and Instagram.

They eventually broke up and after the split, Cyr went on IG Live to explain,

“It wasn’t just her and I’s– it was also your guys’ [the fans] relationship.”

While clear-cut details as to why they broke up still remain a mystery, by some accounts, the reason allegedly was Cyr’s cheating on Olivia. As such a fellow internet personality Chase Hudson accused the five-foot-eight-inches tall, Kio of cheating on Olivia during the crazy TikTok drama that happened in July 2020.

Ponton Said Cyr Cheated On Her

In September 2020, Olivia, herself stated to Hollywire, Cyr cheated on her during their relationship. She said, “He had moments where he was very unfaithful.” She added they tried to work out the problems like any relationship but it ended anyway.

While speaking with Entertainment Tonight in October 2020, Ponton admitted Cyr was her first boyfriend.

On the other hand, Kio later through his tweets criticized Olivia for believing Chase’s allegations about him. As of now, however, things are apparently amicable between the two.

In October 2020, Olivia while talking to Entertainment Tonight, said she and Kio “still talk every now and then” but “don’t hang out or anything.”

The following month Kio also went to his Twitter and confirmed he was single.

When Kio was 19, he apparently dated someone named Lauren, then 16. While not much about the fling is known, but when this relationship ended,  Lauren had tweeted a post that read,

“Yeah I’m done, he flirts with 16-year-olds when he’s literally 19 and he told me he wanted a relationship with me “to be able to say I love you” yet was talking to at least 3 other girls while we were talking.”

Lauren also accused the Twitch streamer of being a player and added that he didn’t deserve everything she had given to him. She wished she had never met him.

Later, in another Q&A which Kio did with Olivia, she explained Kio never flirted with underage girls and said she had gone through his phone but didn’t find him talking to 15-year-olds.

In regards to Lauren’s allegations, Kio remained mostly quiet and didn’t give any official statement.

He Was On Sway House

The Sway House was one of many TikTok houses that started in Los Angeles back in 2019. Kio was also one of its members. The house featured parties and rivalry with the infamous Hype House.

It was Josh Richards who brought Cyr to the Sway House.

However, in Feb 2021, People reported TikTok’s Sway House was officially over after running for more than a year.

In June 2021, there were some internet dramas that involved Cyr feuding with one of the super famous D’Amelio sisters, Dixie.

It all started after the Thai-French Instagrammer, during his live session on Triller, mentioned how Dixie has an entire YouTube show dedicated to discussing TikTok drama that doesn’t involve her.

That’s when Dixie stepped in and basically told him to mind his own business.

The elder D’Amelio sister clapped back hard at Sway Boy Kio after he made some unflattering comments about Dixie.

After some time, Kio replied saying,

To this Dixie commented and explained what she does and what he was doing — weren’t the same thing.

Later, on her podcast which Charli co-hosts with Dixie, 2 Chix, the younger D’Amelio called out Kio for accusing Dixie of using her sister for views.

Charli went on to ask Kio,

“You might say my sister can clout-chase me, but, I mean, what have you been doing in the Sway House, boy?”

She also said, “Let’s get our stuff together.”

Other Facts About Kio Cyr