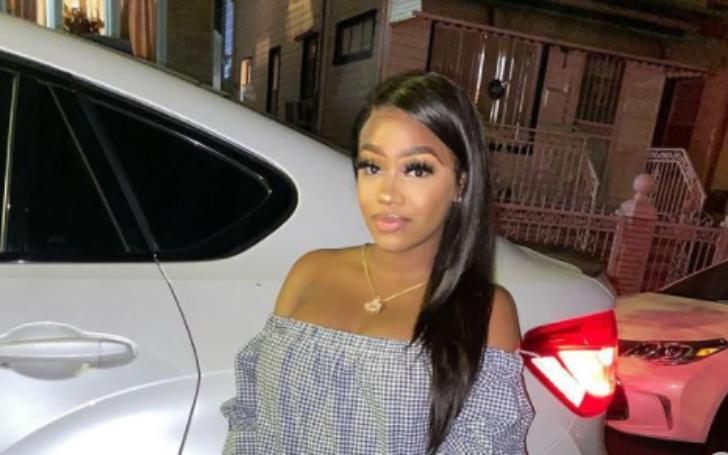 Dejanae Mackie is an American rapper who is more famous than rapper Papoose’s daughter. The star kid followed the same path as her famous father and frankly, she is starting to make a big name.

Besides, Dejanae’ is Papoose’s daughter from his previous relationship. As of 2022, her father is happily married to her step-mom, with whom Dejanae shares a great relationship. Apart from that, there are many aspects of Dejanae’s life that many are curious to know. Questions like who is Dejanae’s biological mother? Does she have any brothers or sisters?

Today find out all the answers to your burning questions. In the meantime, also know if Dejanae has a boyfriend or not? She was previously linked to a rapper so let’s see if they are dating or not?

Dejanae was born in November 1996, in Queens, New York, the United States. At present, she is 25-years-old. She belongs to the African-American ethnicity. She spent the major portion of her childhood in Queens, Brooklyn, and the Bronx.

Dejanae is the elder daughter of rapper Papoose and his former partner Yvette Lashley. Her parents were in a relationship from the late 90s and early 2000s. From their affair, the former flames became a parent of two children one being Dejanae and the other being her younger brother.

Her mother and father separated a long time ago. Since then, her mother Yvette has been totally out of Dejanae’s life, at least from social media. Though it seems that while growing up, Scrolling through her Instagram profile, she is yet to share any pictures of her mother.

What type of relationship she shares with her biological mother is still up for debate. Talking about her education, she studied at a local high school in Queens. Whether she went and attended college after high school is not known.

How many siblings does Dejanae Mackie have?

In total, she has three siblings, two of whom are her half-siblings. She has one real brother, Shamele Mackie Jr., born on April 21st, 1999, in Brooklyn, New York. He is the only son between Papoose and Yvette. As of 2022, he is 23-years-old. Her brother made a string of appearances in the series, Remy & Papoose: A Merry Mackie Holiday. Besides,  various tabloids claim Shamele is gay but there has not been any announcement regarding the matter.

Moving on, Dejanae has two half-sisters, Destiny Mackie born September 17, 2000, and Reminisce Mackie aka The Golden Child, born December 14th, 2018. While Destiny is Paposse’s daughter from his relationship with Ahmillah Camillah, he shared Reminisce with his wife Remy Ma. Back in 2020, Papoose was reportedly expecting a second child with his wife Remy so there’s a new member incoming at the Mackie household.

Aside from this, all of the Mackie siblings share a cordial relationship with each other. Many times, you can see them hanging out together in events and whatnot. Papoose sure has been able to keep his family together as one.

It’s a feat that not many can achieve especially when you are on the road all the time. Once Dejanae even called her father out for not being there for her whenever she needed him. Even so, in the end, the father-daughter duo is on exceptional terms with each other.

Dejanae is a rapper: Following in the footsteps of her famous father

Like father like daughter/son. When Dejanae grew old enough to understand what rap is, she has been intrigued by it. Maybe this is why she delved into this territory pretty early on. However, before making her debut as a rapper, she became a TV star.

She made her first appearance as an actor in the sixth and seventh installment of Love & Hip Hop: New York. In addition to this series, she also worked alongside her family in Remy & Papoose: Meet the Mackies and A Merry Mackie.

Around the same time she featured in the show, she started her rap career with the moniker, “Channel No. 9”. So far, she has released a few singles and albums including the single Blue Faces, Check, and Southside.

Listen to her rapping live!

We’re sure many of you might be thinking that Dejanae’s dad and step-mom Remy Ma helps her out whilst writing the rhymes for her rap. Though you are not totally wrong, Dejanae has gone on the record to claim that many times she is the one who writes her own bars. Be that as it may, there is no harm in learning from the pros.

She shares a close relationship with her step-mom, Remy

It’s a rarity when a person is on good terms with their step-mother or father or anything step. There are quite a few exceptions like for instance Steve Harvey‘s children’s relationships with his wife, Marjorie Elaine Harvey, or in this case, Dejanae Mackie and her step-mom, Remy Ma.

Both of them are quite close to each other. It wouldn’t be far-fetched to say that Dejanae even considers her own mother. Similarly, Remy too loves her to death. Back when Remy was sentenced to prison for eight years over assault charges, Dejanae was always in contact with her via phone. She supported Remy in the most difficult of times. Furthermore, she also visited her at the prison every time.

Safe to say, Remy Ma has a big influence on Dejanae’s rap career.

Is Dejanae Mackie dating a boyfriend? About her Relationship Status

Dejanae rarely ever talks about her dating life because of which it is quite hard to assume her relationship status. That being said, it’s not like we don’t have any clue about her previous affair.

So back in 2017 during an interview with EmEz, Dejanae nervously dodges her dating rumor questions. EmEz asked her if she is dating the rapper, Lou Got Cash for which there was no right answer. While EmEz claimed that he had seen a snippet of her Instagram conversation with the rapper, Dejanae somehow didn’t acknowledge the rumor.

That being said, we can still say something was definitely cooking between the two. Moreover, in the same interview, she also revealed that she is currently talking to a new guy, who is defo not ‘Lou Got Cash.’

As of 2022, she is not in a public relationship with a boyfriend or a girlfriend, for that matter.

How much is Dejanae Mackie’s Net Worth?

The star kid enjoys an extravagant lifestyle all thanks to her father Papoose’s fortune which currently stands at $200,000. Apart from her father’s wealth, Dejanae also has a career of her own from where she earns a decent chunk of change.