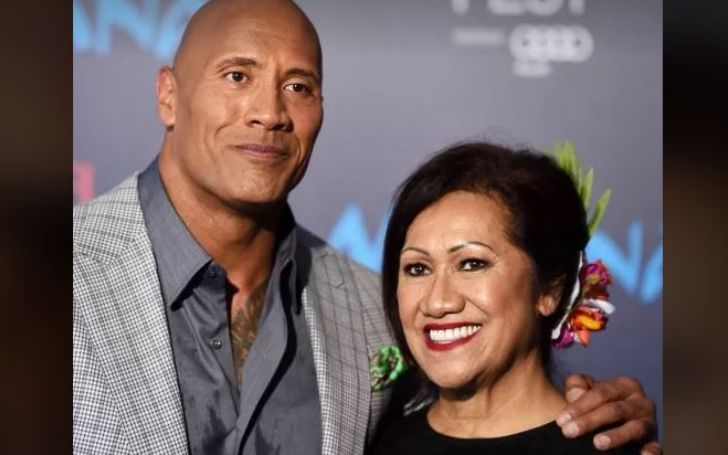 Ata Johnson is the mother of the former WWE wrestler and one of the highest-paid Hollywood actors, Dwayne “The Rock” Johnson. Not only this but Ata was also married to a wrestler Rockey Johnson.

Dwayne’s mother and Dwayne himself have come a long way to reach their current prosperity; from poverty to roaming each state and some life-threatening conditions. She often is the talk of the media for the way she receives the love from her famous son.

See how come the highest-grossing actor always credits Ata for his extraordinary success. In between also know about her origin, past marital life, and how is she doing in the present.

Ata Johnson Is The Daughter Of Wrestlers

The daughter of Peter Maivia and Lia Maivia, Ata Johnson was born Feagaimaleata Fitisemanu Maivia on October 25, 1948, in Hawaii.

The now 73-year-old, Ata also has ties to a legendary clan of Samoan wrestlers. Her father, Peter Maivia, who was born in Samoa in the 1930s was also a “blood brother” of the Anoa’i family. He was a pro wrestler who began his career in New Zealand training under South Pacific legend Steve Rickard.

Some time afterward he entered the WWE (then, the WWF) during the ’70s and later became famous with his ring name, The High Chief. Ata’s father won numerous championships in the South Pacific and Hawaii before finally coming to the United States in 1970. He dominated the west coast in the 1970s, winning multiple championships in both Los Angeles and San Francisco.

Peter was diagnosed with cancer in 1981 and tragically passed away in June 1982 at the age of 45.

Interestingly Maivia’s mother, Lia Maivia, too was a wrestler and one of the first female wrestling promoters. Also in the same profession were her two brothers, Pater Maivia Jr, and Toa Maivia.

Rocky also wrestled with the National Wrestling Alliance beginning in the ’60s, and later, the WWE. Maivia’s father, Peter initially objected to her marriage to Rocky in part of his knowledge of the cons while marrying a wrestler.

With Rocky, she gave birth to their one and only child, Dwayne on May 2, 1972. The former couple met on the independent wrestling circuit. Rocky was still married to his then-wife Una with a daughter when he began an affair with Ata.

Within a decade of their marriage, Johnson and Rocky started to have troubles in their life.

First, Rocky, in 1987, went to police custody for a series of sensitive issues that ended his wrestling career. The fighting committee blacklisted him that led him to the path of alcoholism.

Maivia and her husband along with their son used to live in little apartments all across the country. Dwayne once revealed he and his parents lived like gypsies on the road from one state to another.

She Also Lost Her Apartment

Amidst the financial destitution that the Rock’s mother and father were facing, at one point Ata Johnson also lost her car in debt and her family faced eviction from their home when her future actor son was 14.

Maivia’s son says the moment is something he’ll never forget throughout his life. The family of three lived paycheck to paycheck and most of the time wondered how they were going to pay the rent.

According to the Rock, his mother, Ata, and his father, Rocky for several years relied on the independent wrestling circuit for income. They used to live in an efficiency that cost $120 a week, the former WWE champion told The Hollywood Reporter back in 2014.

Eventually, once their son became a WWE superstar, their economical difficulties started to evade gradually. Some years later, Ata’s marriage with Dwayne’s father, Rocky Johnson would nonetheless end in 2003.

Ata Johnson Once Tried To Kill Herself

In April 2018, the Rock revealed the time when his mother tried to commit suicide.

The Fast And The Furious star said how at one time, Ata got out of the car on Interstate 65 in Nashville and walked into oncoming traffic. Dwayne said the big rigs and cars were swerving out of the way.

The Jumanji actor revealed he grabbed her and pulled her back on the gravel shoulder of the road. Dwayne was then 15 and this was months after they had lost their apartment.

It, however, is unclear where Johnson and his mother were living at the time or how they wound up on I-65 in Nashville. The Ballers alum though says Ata has no recollection of the suicide attempt.

The Mother Of Dwayne Johnson, Ata Survived A Car Accident

In Aug 2014 Dwayne had quite a scare when his mother, Ata, and his cousin, Lina Fanene, were hit by a drunk driver, a woman.

“My mom & cousin @linafanene was struck head-on by a drunk driver this week – they lived. The first reaction is to find the person who did this and do unrelenting harm to them. But then you realize the most important thing is my family lived thru this and we can hug each other that much tighter these days. Hug your own family tighter today and be grateful you can tell them you love them.”

Johnson also shared a photo from the car crash, in which both cars appeared completely wrecked. The wrestler later shared the photo on Twitter wrote the accident was “100% preventable.” Luckily, Ata and Fanene didn’t bear any serious injury.

She Has Received Luxury Gifts From Her Son, The Rock

In addition to being famous as the mother of a Hollywood superstar, Ata also occasionally steals the internet thunder by receiving extravagant gifts from her son.

The inseparable mother-son duo almost always breaks the online community on Holidays with the ex-WWE star showering her with ultra-expensive things.  The Rock first made headlines in 1999, when he gifted his parents the first home they ever lived in.

However, the first time Dwayne took this gift-giving gesture to the internet was in December 2012 when he presented his mother with a brand new White Cadillac SRX. The action star did the same for his then alive father.

Then in Christmas 2018, Dwayne gifted Ata a brand new home. This he also shared on his Instagram.

“This one felt good. Surprise! Bought my mom a new home for Christmas,”

wrote the 1995 NFL draft alongside the video where his mother is reacting to her son buying the home of her choice.

Further in December 2021, again on the occasion of Christmas Dwayne once more gifted his mother, a brand-new Cadillac.

“Surprised my mom with a new car for Christmas today. She was shocked. She got a few good ugly cries in,”

captioned the Rampage star. The 2000 Royal Rumble winner says ever since he ended his family’s financial hardships, he decided to always make sure his mom and dad have everything they’ll ever need – houses, cars, etc.

Is Ata Johnson In The Movies?

While Peter’s daughter is yet to have a role in the movies, in Feb 2021, NBC released a new comedy series, Young Rock based on Dwayne Johnson’s real-life including his relationship with his mother.

In fact, Ata is the other focal character in the series. Actress Stacey Leilua plays her character of hers in the series while Joseph Lee Anderson portrays his famed father, the wrestling champion Rocky Johnson.

Dwayne Johnson appears as himself in the series by the creators Nahnatchka Khan and Jeff Chiang (both from the fame of Fresh Off the Boat).

She Has Three Granddaughters

Ata aka Fitisemanu has been enjoying grandma time for years now as her famous son himself is a father of three.

The California-native has three daughters, Simone Johnson with his ex-wife, Danny Garcia, and two little girls, Jasmine and Tiana with his current wife, Lauren Hashian.