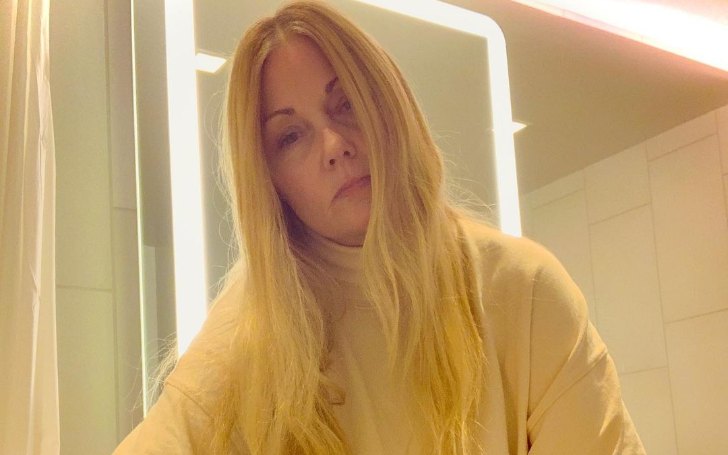 London King is a former model and actress known for A Better Way to Die (2000), The Calling (2002), and Raw Fish (2001). More than her profession, King is widely popular as the ex-wife of an American actor, comedian, and producer Rob Schneider. Also, London is equally recognized as the musician Elle King‘s mother.

Talking about London and her famous ex-husband Rob’s marriage, they got married in 1988. From their marital relationship, the now ex-couple welcomed a daughter Elle but even after having a child together, their marriage could not last long. They eventually separated in 1990. Well, after her divorce from Rob Schneider, did London remarry? If yes, who is her husband?

Here, in this article, we have come up with detailed information about the personal and professional life of Ron Schneider’s ex-wife London king. Have a closer look!

London King was born to her father David R. King and her mother Paula N. King on September 27, 1971, in Wellston, Ohio, US. As of 2023, she is 51 years of age. Her father David is reportedly a businessman while her mom was an employee in Pharmacy.

She grew up in her hometown alongside her parents and her only brother William Scott King. Besides, King belongs to the Caucasian ethnicity and is American by nationality.

London’s Mother Passed Away In 2014

Her mother Paula N. King is no longer alive in this world. She died at the age of 72 on May 20, 2014, at her home. Paula, born in Chesapeake, Ohio on February 28, 1942 was the daughter of the late Attorney William J. Curry and Pauline Holly Curry.

As said earlier, King’s late mom was an employee of Fruth Pharmacy in Wellston.

London King Started Her Career As A Model; She Worked As An Actress As Well

As a teenager, London began her career as a model. She first appeared in some commercials and advertisements. But, in the very initial period of her modeling, the Ohio native lost a chance to model in more projects due to her teen pregnancy.

However, later in the 2000s, she again made her way back to the showbiz industry. In the year 2000, she debuted as an actress through an action movie A Better Way To Die in which King portrayed the character Cheryl. She then played Jade in the 2001 movie Raw Fish (2001) and Ruby Jenkins in The Calling (2002). After that, she quit acting and switched to her career as a doula, a professional labor assistant.

King Switched Her Career To Doula

After she quit acting, Rob Schneider’s ex-wife London switched her profession to Doula, a non-medical personnel serving as a birth companion, birth coach, and post-birth supporter. She started working as a Doula in 2003 in New York. Since 2003, she has shared many posts regarding her work on her Instagram too.

She is now retired from her profession as a doula. Apart from being a doula, London is also a trained placenta chemist. She was certified in Bloodborne Pathogens and Infection Control for placenta encapsulators in 2013.

King Is The Ex-Wife Of Rob Schneider

London King is the ex-wife of Saturday Night Live comedian Rob Schneider. The ex-couple first met in the year 1988 in Las Vegas. At the time London was only 17 years old. As per sources, they got married just 3 days after their first meet-up on September 25, 1988.

But, unfortunately, their marriage lasted only for 2 years. King and Schneider reportedly had a confused relationship and the former couple got divorced on September 1, 1990. Following their divorce, her ex-husband Rob married two times, first with Helena Schneider with whom he separated after 3 years of their marriage. Rob is now happily married to the Mexican TV producer Patricia Azarcoya Schneider.

London King Is Now Married To Her Husband Justin Tesa

On January 21, 2000, London tied the knot with her now-husband Justin Tesa at a private ceremony. Her spouse is a Custom Screen Printer & Record Label as per his Instagram info.

Coming up to 2023, it’s been more than two decades since they are together as a husband and wife. London keeps sharing her moments with her husband on her Instagram. On February 2018, she shared her post together with her spouse and wrote,

I stuck my chewing gum on his nose and took the first pic of the man I would want to spend the rest of my life with. Almost two decades later, I still crave you and wildly love you. I appreciate your kindness everyday @crownprintsnyc 💞

Looking at this, we can say that London has a beautiful matrimonial life with her better half Justin Tesa.

London King Is The Mother Of Two Children

The former actress is the mother of two children, a son named Noah King with her unknown former boyfriend and a daughter Elle King with her former spouse Rob.

Noah is her first child who was born in August 1986. Back on August 3, 2012, London post a picture of her only son on her Instagram with a caption,

My little fella is ’bout to have a birthday. 26 years ago on Sunday, I was birthin’ my boy. Time flies. #flashbackfriday #naturalhaircolor #longtimeago

As of 2023, her elder son Noah is already 36 years of age. Similarly, together with her ex-husband Rob Schneider, she welcomed her second child Tanner Elle Schneider who is now popularly known as Elle King. Her daughter Elle was born on July 3, 1989, which made her 33 years of age in 2023. She is now a successful singer, songwriter, and musician in the American Entertainment Industry.

Her Daughter, Elle Is An Accomplished Singer And Songwriter

Just at the age of 10, Elle began her career in the showbiz industry as an actress. In 1999, she made an appearance as a child actor in her father Rob Schneider’s movie Deuce Bigalow: Male Gigolo. But as a professional singer, she released her first single Good To Be A Man in March 2012. The same year, Elle was named an “Artist to Watch in 2012,” by Esquire magazine.

As of now, her three studio albums have been released alongside her participation in several national and international concerts. Due to her exceptional musical career, she got nominations for Grammy Awards four times and is honored with the Country Music Associations Awards and the Academy of Country Music Awards.

London King Is A Grandmother

The 51 years-old former actress is a grandmother to her four grandsons, Lucky Levi Tooker, Cyrus, Harlan, and Logan.

Lucky is her daughter Elle’s son whom she shares with her fiance Dan Tooker. He was born on 1st September 2021 which made him 1 year old in 2023.

Further, Cyrus, Harlan, and Logan must be the sons of her son Noah. As of 2023, her grandsons Cyrus is 3 years of age, Harlan is 1 year and Logan has already celebrated his 8th birthday. London is absolutely close to all her grandchildren and often shares them on her social media account.

King Has Two Pet Dogs In Her Home

The Wellston native loves to be around pet animals. So, in her family, the former celebrity spouse has two pet dogs named Sparky and Tony. Looking at her post on her Instagram, it seems like her pet dogs are no less than a family for her. She keeps sharing them on her Insta page. In November 2020, she dedicated a post for her dog Tony with a caption

Also around Christmas time, London again posted a picture of her dogs by writing “Me and Sparky making Tony very upset. #spreadinglove #christmasdogs“.

A Raw Fish famed actress is hugely active on Instagram with 9006 followers. On her Insta page, she shares her moments with her family and friends. Most of her posts on her Instagram are about childbirth, her profession as a doula, and some of them are with her grandsons and children as well.

London King reportedly has a net worth of $400,000 in 2023. Meanwhile, her famous daughter Elle King has an estimated fortune of $4 million as of 2023 while her ex-husband Rob Schneider has a fortune of $12 million.