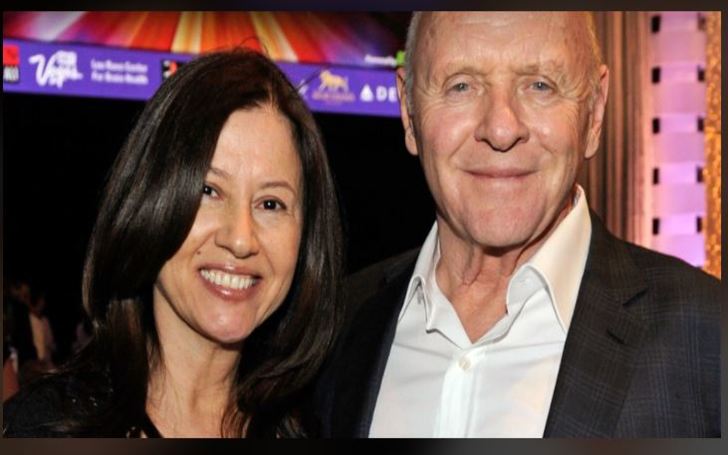 Stella Arroyave is an actress, director, and producer known for the films Slipstream and The Human Stain. She is more famous as the wife of two-time Oscar winner, Sir Anthony Hopkins.

Hopkins fans have all Stella to thank for his continuous stellar performance on the big screen. If it wasn’t for his current partner, The Father actor might have almost given up on acting.

Know how Stella changed the life of Anthony and why the actor feels so grateful to her. Also read all about her early life, her journey into writing, directing, producing, and much more.

Stella Arroyave’s Grew Up With A Sick Mother

She was born in Popayan, Columbia on March 20, 1956, but grew up mostly in New York. In Jan 2021, with Variety, Arroyave revealed she was raised by her mother who had a diagnosed schizophrenic disorder.

She left the Big Apple when she was 19. Stella originally wanted to be a lawyer. But she somehow came to Los Angeles to pursue an acting career. The New Yorker-raised Arroyave then took a lot of courses at UCLA, writing, directing, filming. She even did some music videos.

Arroyave also lived in Sweden during which she developed a fascination with European films.

She was an art dealer in Colombia who moved to Los Angeles to open her own antique shop and art gallery. Together with her Academy-winning husband, she runs an art company, Margam Fine Art.

Arroyave has worked with her husband on a few or two movie projects. In 2008, she acted herself in a short documentary video, Dreaming Slipstream Dream.

In 2020, she wrote and directed the psychological thriller film, Elyse where her husband plays the character of a doctor. Fact: She Shot The Film In 13 Days.

Another project where she has worked with her husband includes the 2007 comedy-drama film, Slipstream.
In like manner, she was also a faculty member in the 2003 movie The Human Stain starring again her husband, Hopkins, and Nicole Kidman.

Elyse Is Much More Personal To Arroyave

With NBCLA, the Hispanic filmmaker stated when she first started writing Elyse, she did not think the film would touch her on a personal level. She explained she initially desired the movie to be about mental illness, but as the script progressed, she remembered her own personal experiences with her mother’s mental health issues.

The producer/helmswoman also admitted much of her character Elyse resembles her mother and her different moments with the disease.

Elyse has Arroyave’s best friend, Lisa Pepper playing the titular role with her husband one of its stars as well as its composer.

Hopkins and Arroyave tied the knot in 2003. The couple has an age difference of 18 years. They had their wedding at Hopkins’ clifftop mansion in Malibu. It took place on St. David’s Day. The guests included names like Winona Ryder, Nicole Kidman, and Steven Spielberg.

It had been a year since the former had divorced his second wife, Jennifer Lynton of 29 years. Prior to marrying Arroyave, the Nixon actor admitted that he wasn’t “very good with any relationships — with anyone.”

In 2013, while talking to Daily Mail, Hopkins said his current wife Stella Arroyave “is very good for me, my wife, because she slows me down.” The actor calls her “wonderful woman”  the one who he credits for saving him from a “slight depression.” The couple resides in Malibu, California.

How Did Arroyave And Hopkins Meet?

Hopkins and Arroyave’s first met each other in a Los Angeles antique shop in the year 2001. Ms. Hopkins was then working as an antique dealer.

Hopkins, one day happened to hop in the store where Arroyave was working. The now 83-year-old Welsh star was looking for furniture for his home, reports The Telegraph.

To Hopkins’ surprise, when his current wife saw him, she didn’t greet him normally but danced a bit. From then on, the couple would date for two years.

The Couple Are Also Business Partners

In Nov 2020, The Human Stain actress said together with her husband she owns a fragrance line called “Ah Eau de Parfum.” The company also provides aid to the charity NO KID HUNGRY.

Hopkins Said He Had “Shut Down” Prior To Meeting Stella Arroyave

Hopkins describes he had shut himself from the outer world amidst his second divorce. This was some time before marrying Arroyave.

Recalling the time he met his present spouse, the actor said he said,

“She met me ten years ago when I was shut down. Shut down for some years. I didn’t feel shut down at that time. I felt I was quite happy. But I was dealing with slight depression. Not trusting anyone. Certainly not trusting women”

And yet, Stella was able to reach him. The Silence of The Lamb actor says he found his wife’s positivity impressive.

The British star claims his partner since 2002, wakes up “happy almost every day.” He adds that she is very positive about everything and that he learned from her just to take life as it comes.

Hopkins Says His Wife, Stella Is A Big Spender

Arroyave, as per her actor husband, enjoys the finer things in life and her favorite hobby is shopping.

Hopkins once disclosed that his Columbian wife is constantly swiping his credit card. He explained how she’s a wonderful woman who likes to spend money. The veteran star added Arroyave almost always spends money.

Stella Arroyave Is Working On Her Husband’s Documentary

While talking with Variety, the Elyse director revealed that her next project would be a documentary based on her husband. She said she’d been developing her partner’s documentary of his life.

Arroyave informed that she and her team had already started shooting some of it in his hometown in Wales, interviewing several people — Oliver Stone and Jodie Foster, and Ian McKellen.

Although an approximation to Stella’s fortune is a report that is sine die, she is easily considered a millionaire if not as rich as her husband who has an estimated net worth of around $180million. She’s been dealing with millions for as long as she’s been in the public’s attention.

If nothing at all, her multimillion-dollar properties can very well provide a bit of perspective on her wealth extent. As such she formerly lived in Malibu, CA, an estate which in 2020 got a listing price worth $11.5 million, a substantial increase from the $3,795,000 he paid for it in 2001. Also two years earlier, they had purchased a newly constructed home in Pacific Palisades for $6.6 million, then bought the vintage 1940s Colonial next door for another $6 million.

Not to mention she is also the CEO of Home Fragrance Candle and Diffuser Collection in addition to a production company.

Some Other Facts About Stella Arroyave