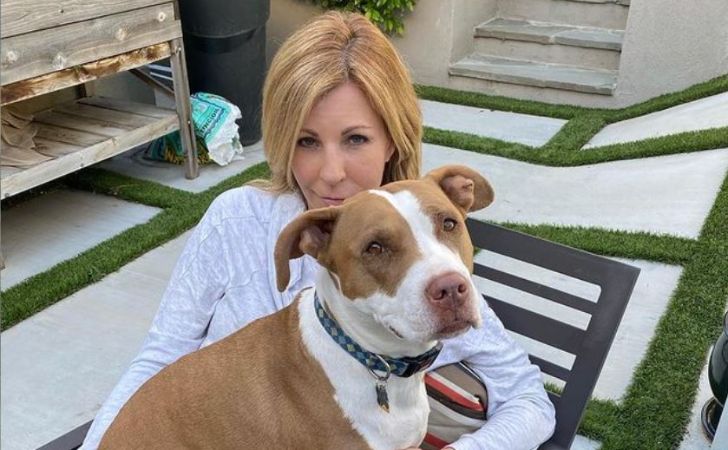 Anne Wheaton is an author, rescue animal advocate, & actress. As an actress, she has only appeared in a very few TV series one being Sharknado 2: The Second One. Besides, she is also famous as the wife of American actor Wil Wheaton.

Moreover, Anne is also a cosmetologist and took cosmetology classes in the past. At present, she leads a beautiful life along with her actor-husband and children. Well, what about her parents and her early days?

In this article, we are going to explore every aspect of her career, relationship, and net worth as well.

Like we mentioned above, Anne Wheaton is married to a successful actor Wil Wheaton. The couple tied the knot on 7 November 1999, in a beautiful wedding ceremony. All their close friends and family members attended their marriage.

At the time of their wedding, Anne was 29, whereas her husband Will was 26 years of age. It has been over 2 decades since they tied the knot, and their bonding seems as strong as ever.

Anne and Wil often post photos of one another on their social media, which pretty much reflect their love for one another. Just recently in 2020, Anne made a post on her Instagram on the occasion of her 21st wedding anniversary.

It is not just this year, but both the Wheaton couple dedicate a post to each other on their Instagram each year.

How Did Anne And Wil Meet?

Their meeting is a beautiful story. The couple met for the first time back in 1995 at the New Year’s Eve party via a mutual friend. At the time, the then 26 years old Anne had just come out of a troubled relationship. And thus, she didn’t care much despite knowing the fact that Wil found her cute which she came to know via their mutual friend.

But fate had a different story as the same friend invited them both for a movie, where Anne and Wil met for the second time. This time to find a space for one another in their heart. They soon became friends and eventually began dating.

As per Anne Wheaton’s blog “When You Were Young,” she soon introduced Wil to her children. And around nine months later, they moved in together.

Anne Has Two Children From Her Previous Relationship

Unfortunately, Anne has been through a troubled relationship in the past. She has not revealed much about her previous relationship, but she has two children, Ryan Wheaton, & Nolan Wheaton.

Bot her kids are already grown up and they share a great relationship as a family. After she married Wil, he has been a great father to both her kids. Despite not being their biological father, he took care of both the kids with equal compassion and love.

During the growing up years of the kids, Wil reportedly wrote a blog about his daily life with the kids. Later, he compiled all the blogs forming into a book named “When You Were Young’. Further, he has also adopted one of the children who requested him to officially adopt him when he turned 19.

She Worked As A Waitress Before Becoming An Actress

Like most of us, Anne has also been through her share of struggles. As a young mother of two children back in the 90s, she did odd jobs to make her ends meet. As per the reports, she even worked as a waitress. Apart from this, as a certified cosmetologist, she also took night classes for money.

Eventually, things turned in her favor after her meeting with her now-husband. She has since been part of movies and TV series in many ways. Back in 2013, she worked as a hairstylist in the movie Neverland.

Besides, she has also made special appearances in Tweet Out, Project for Awesome 2013, and The Wil Wheaton Project, where she appeared alongside other actors like Mat Lageman, Shawn Ashmore, Felicia Day, among others.

What Is Anne Wheaton’s Net Worth?

There is no proper calculation on the net worth Anne. But her husband is pretty huge when finances are involved. As of 2021, he has a net worth of $1 million as per Celebrity Net Worth.

He has made most of his money from his career as an actor. Most of his money comes from his recurring roles in Star Trek: The Next Generation and The Big Bang Theory that also stars Laura Spencer, Sarayu Rao, & many others.

Anne Wheaton is pretty much active on social media. She is a presence both on Instagram and Twitter and has earned decent followers. As of 2021, she has around 60k followers on Instagram. Likewise, on her Twitter, she already has over 106k followers. On both platforms, she pretty much gives insight into her personal and professional life.

The beautiful Anne Wheaton was born on August 8, 1969, as Anne L. Prince in the United States. As of 2020, she is 51 years of age. Her birth sign is Leo. Unfortunately, she has not revealed much about her parents. Besides, she also has a sibling, an older brother.

Bill Belichick’s Ex-Wife Debby Clarke: Everything You Should Know