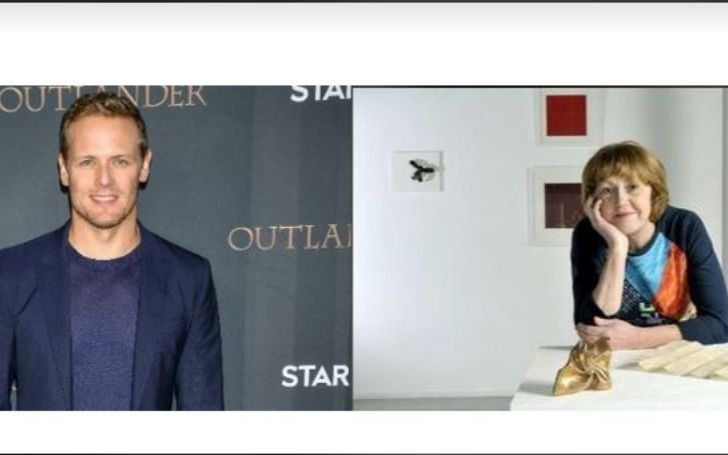 Chrissie Heughan is an artist who works predominately with hand-cast paper but also deals with other art forms such as collage and mixed media, printmaking, and sculpture. Most of her themes are Abstract, Botanical, and Environment.

She is also known as the mother of the British actor, Sam Roland Heughan. Sam is best known for his starring role as Jamie Fraser in the Starz drama series Outlander (2014–present) for which he has won the People’s Choice Award for Favorite Cable Sci-Fi/Fantasy TV Actor and the Saturn Award for Best Actor on Television.

The Outlander actor Sam’s mother, Chrissie over the decades has become an international artist with a huge fan base within her own industry but tends to keep a low profile on social media. She has exhibited and lectured nationally and internationally and her work is represented in both public and private collections in Scotland and abroad.

Since graduating College of Art, Sam’s mother has pursued her own work and career as a professional artist and freelance tutor. Chrissie teaches at various art institutions, lecturing in papermaking, printmaking, mixed media, and sketchbook work.

Heughan’s paper-making workshop introduces, participants to the ancient art of papermaking from start to finish including pulp production, forming, couching, and drying. Learn add-ons about Chrissie Heughan in the details below; her early life, how she raised Sam, her relationship with his father, her own profession, and more.

How Old Is Chrissie Heughan; What Is Her Ethnicity?

Although Heughan is yet to reveal her birth details, it is presumed she is now in her 60s or 70s. The Artist, Gallery educator, and Maker, Heughan is of Scottish descent.

While her actor son Sam was born in Scotland, Chrissie, herself along with her late ex-husband was a part of a hippie community in London called Gandalf’s Garden.

It is inspired by J.R.R Tolkien.

How Did Chrissie Heughan Begin Her Art Journey?

Chrissie developed an interest in paperwork whilst experimenting with paper pulps and consequently becoming absorbed with the making of and process of hand-cast paper.

To gain proficiency, Heughan studied Art and Design, and Fine Art (Portfolio) at Dumfries and Galloway College of Technology.

She additionally also has a degree in Fine Art B.A. (Hons) Drawing and Printmaking from Edinburgh College of Art, class of 1995.

She was one of six international artists to participate in the Paper Village Art Project in Mino, Japan in 2001. During her time in Japan Chrissie also studied papermaking with a master papermaker. There she worked and studied with expert craftsmen.

She also has had training from Bronze Casting, Royal Academy, the Worshipful Company of Founders, and Piccadilly.

Heughan’s Beginning As A Paper Maker

Chrissie’s profession in hand-crafted paper began in 1996. Heughan would initially use richly dyed paper for a series of dynamic printed hangings and ran a series of paper-making workshops for Waverley Care Trust. It was especially for people with HIV.

Since 1997, actor Sam’s mother has had a studio at Edinburgh Sculpture Workshop. There, in the beginning, she would work with paper pulps to form surfaces to print, collage upon or build new forms.

In 2005 Ms. Heughan began making some bronze casts of folded paper origami, playing with the notion of transience and permanence; tenuous paper as opposed to the bulk of the metal.

She would visit Japan once again in 2006 to be part of the Street Museum, an international exhibition in Mino and Gifu City.

Chrissie started to gain honors and awards for her work as early as the mid-2000s. One of her first major accolades was the 2005 Professional Development Award – Bronze Casting, Edinburgh Council.

The following year in 2006, she won the Professional Development Award, Scottish Arts Council. The next year, she received the Friends of The Royal Scottish Academy Award, Friends of the RSA, Edinburgh.

Then in 2010, Chrissie once again won the Professional Development, Scottish Arts Council Crafts Award, Edinburgh. Heughan has also received honors for bronze casting, and for her study of Japanese paper making.

It is to date a mystery who was Chrissie’s ex-husband and the father of her sons. Though what has been reported is that Heughan’s ex-spouse had left her and her two sons when Sam was only three years old.

After Chrissie’s husband left her, the Scottish paper artist had to raise her two young children all on her own. A syndicated ARTICLE by Luane Lee states that Heughan raised two sons in a rural area of Scotland largely by herself from the time Sam was a toddler.

The British craftswoman did odd and dead-end jobs to support the family; she worked as a clog shoemaker, whilst also pursuing a college degree.

Chrissie would meet with her husband decades later in 2014; he, though, at the time was sick with Leukemia. Not long after reconnecting, Heughan’s former partner passed away from the disease. Chrissie and her former partner named their sons Sam and Cirdan after characters in The Lord of the Rings.

While one of her sons, Sam focused on acting, her other son, Cirdan is married to his longtime girlfriend, Victoria Lawson with whom he has a child.

In 2008, Cirdan went through a tough time when he knew about his testicular cancer diagnosis. Heughan’s son, however, made a full recovery after treatment.

What Does Chrissie Heughan Do Now?

Throughout her professional career as a papermaker, Chrissie has had several job titles. For starters, she now is an elected Professional Member of the Society of Scottish Artists.

She has served on many of their selection, hanging, and arranging committees; she is a committee member of Fife Dunfermline Print Workshop.

Chrissie occasionally also oversees projects where artists from Japan and Scotland involve themselves in the exchange of paper. She is also one of the heads behind the creation of specialized papers for artists working in South Western Australia.

She has her own line of business called Chrissie Heughan Paper. It is located in EDINBURGH, United Kingdom, and is part of the Agents and Managers for Artists, Athletes, Entertainers, and Other Public Figures Industry.

Chrissie is also a teacher. The Edinburgh college graduate has taught and organized many workshops in papermaking, printmaking, and mixed media across a broad spectrum of the community, for adults and children and those with disabilities.

Some of the organizations and institutions where Heughan has mentored include Edinburgh Sculpture Workshop, Fruitmarket Gallery, National Galleries of Scotland, Waverly Care Trust, Artlink Central, Edinvar Housing, Leith School of Art, Edinburgh College of Art, Gracefield Arts Centre, and primary and secondary schools in Edinburgh and the Borders.

In Nov 2020 Chrissie’s actor son had to hit back at the internet after somebody created a fake Twitter profile in his mother’s name. The Balmaclellan-native slammed trolls behind a fake online profile claiming to be his mum.

Chrissie’s son shared the Instagram account which was pretending to be his artist mother on Twitter. The Scots actor remarked on the act by saying blasted the “disgusting people.”

Sam notice the phony page through a fan who also forwarded him a private message from the one who created the sham handle. Apparently, the fake social media handle had reached to the person by telling him,

“How are you doing today? I’m Chrissie Heughan (Sam Roland Heughan) Mom. I saw your comments and interest in my son and his work and I appreciate you on his behalf.”

“Though he doesn’t always get the time to speak to his fans personally, but his constantly receiving the news of people claiming to be him, collecting bank details and money from his fans, I feel terrible whenever I get informed of it, hope you’ve never been a victim. I will love to get a response from you.”

The shocked fan who received the message late shared it with Sam and urged him to stop it saying, “Unbelievable! They have exceeded the limits. Please report and block this fake account.”

Does Heughan Have A Husband?

Although, Chrissie, who now mostly lives in Edinburgh, there, however, lies insubstantial chapter and verse about her off-the-record life especially when it comes to her current married life. While there is an Instagram handle on her name, the profile hasn’t seen any new posts since 2013. She though is still moderately active on Facebook, but the mother of two, there, mostly talks about her artworks.

For all of her popularity among the European Art community, she is yet to spell out the beans on her life besides the work; who her husband is, and such. On the other hand, considering Heughan has hardly talked about that facet of her life, it might be almost never that the outsiders will get to know who her existing partner is. Or is she even married or not.