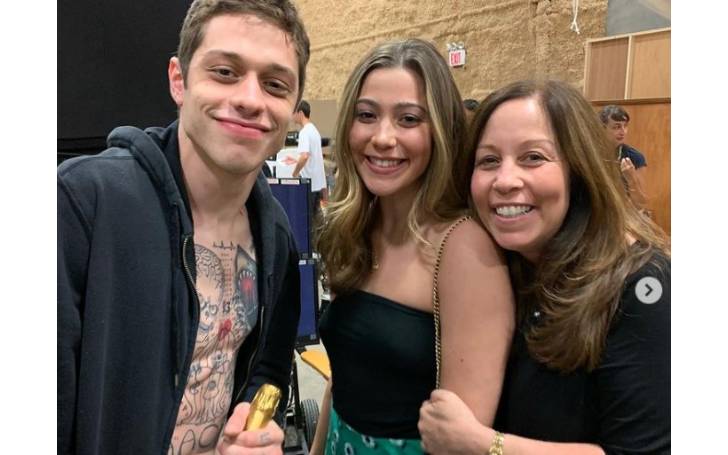 Amy Waters Davidson is famous as comedian Pete Davidson’s mother. Currently, her son is one of the most famous comedians out there. He became a known face after his work in SNL.

Amy raised both Pete and her daughter all by himself after her husband Scott Davidson died. One can say, she is the iron lady of the Davidson family.

So today we are going to find out some interesting facts about Pete Davidson’ mom Amy Waters Davidson. We will find out what is she doing now?

She was born Amy Marie Waters on September 19th, 1969, in New Jersey. She belongs to the Caucasian ethnicity and belongs to American nationality.

Amy is the daughter of Peter M Waters and Rebecca A Waters. In addition to herself, she also has four sisters, Rebecca, Bridget, Margaret, and Tara. She named her son after her father Peter, who has an uncanny resemblance to his grandson.

She Used to Play Basketball in College

After finishing up high school, Amy enrolled at the College of Staten Island aka CUNY. She studied at the college alongside Pete’s father Scott Matthew Davidson.

According to reports, she studied nursing at the college while her late partner graduated with a bachelor’s degree in history.

Besides, Waters was a multi-talented individual at college. She used to partake in a lot of sports activities and was a member of the college’s women’s basketball team.

Although many of you recognize Amy as Pete Davidson’s mom, her name was already famous. Her partner, Scott became a hero after he saved so many lives during the 9th September 2001 attack.

Scott, a firefighter who was on duty that dreaded day, responded to a call right after a second airplane crashed into the World Trade Center.

He was a member of the Ladder Co. 118 in Brooklyn Heights which responded to the call. His father, who spoke to the police and fire officials, described the event as,

“When they arrived on the scene, they parked their rig at West and Vesey streets, then vanished into the thick, cloudy smoke and soot.”

He further added, “It is believed they were on the 15th floor in the north tower, on the way up, when the building collapsed. Only their truck was recovered and has been restored and put back in service.”

Firefighters who worked alongside Scott described him as a patriot. One of his well-wishers Mr. Perry Seridge, said,

He loved all things American,” Mr. Seridge said. “I used to think it was kind of rare, really, especially for a young guy who had never been in a war. Looking at it now, it was nice. He’d be really happy now that everyone would have flags out.”

Judging by the amount of warm reception he got, it is fair to say Scott was the man of man.

Were Pete Davidson’s Mom And Dad Ever Married?

Well, this is one of the most intriguing questions out there in regards to Amy. Although many sources have written Amy married late Scott back in 1990, right before he started his career in firefighting.

That being said, in the majority of Obituaries that we found about Scott, there is no mention of Amy as one of Scott’s surviving family members.

Well, whatever the case may be, they were still in a delightful relationship until the tragedy struck.

Regardless of the fact that both the kids were raised without the shadow of their father, Amy made sure her kids get the proper childhood they rightfully deserve.

At first, it was quite difficult for both of them to cope, especially Pete who even had to go to therapy.

Amy Raised Both of Her Kids All by Herself

It is a given fact that women have far more tenacity than men when it comes to taking care of their families. Likewise, after her partner Scott passed away, she took it upon herself to raise her son and daughter.

She sacrificed a lot in order to give her children the best childhood possible. Albeit the family had their fair shares of ups and down, all is good now.

Her son is one of the biggest comedians/actors of his time while his daughter is also excelling in her own.

Has Amy Waters Davidson Dated or Married After Scott’s Death?

At first, she has not married anyone since her partner’s death. Furthermore, it looks like she is currently not in a relationship with anyone. She has dedicated the major portion of her youth towards caring for her family.

Nevertheless, Pete wants his mother to date. As we know Pete can be super candid at times, he did so when he was talking about his mom on Dressing Funny.

When British TV personality Tan France asked, ‘Does your mom date? Davidson’s response was, “I’m trying to get her to.”

Tan France then asked, “How do you feel when your mom dates?” he jokingly said,

“I don’t care … Someone should slam her. Seriously, she’s been, like, not with anybody since, like, my dad died. Someone needs to get up in that and get that lady off my back!”

Well, there you have it. Pete really wants his mom to go out & have some fun with life.

As of now, Amy seems to be relishing her life as a star mom. She is not involved in any profession as of yet, but she usually donates money to various causes.

Further, several tabloids claim she used to work as a nurse at Xaverian High School in Brooklyn.

She is not involved in any relationships so there is no right way to estimate her net worth. On the other hand, her son Pete is currently worth a staggering $8 million.

He earned his riches through his career as a professional comedian. He earns at least $15,000 to $25,000 per episode from his appearance in SNL.