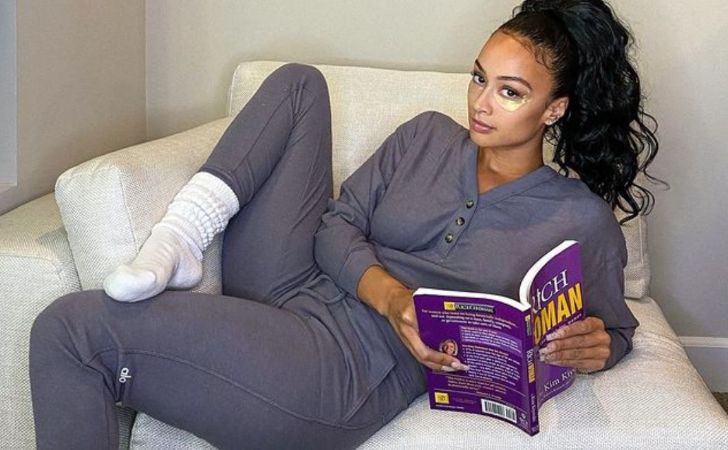 There have always been massive speculations about Draya Michele’s boyfriend, husband, and as a whole her love life. And as a successful social media star, all the scrutiny and concerns regarding love life are pretty obvious. But unfortunately, very little truth about her relationship has made it to the media.

In fact, there have been several misunderstandings about the biological father of her first child Kniko Howard. Besides, she has a second child with her ex-fiance Orlando Scandrick. But what is her current relationship status? Is Draya Michele married at present? Or is she dating a boyfriend?

In this article, we are going to talk about every aspect of her love life. Be with us to know the details.

Who Is Draya Michele’s Boyfriend in 2022?

Well, after a series of breakups in the past, Draya has found a new boyfriend. She is dating American football quarterback Tyrod Taylor. The couple reportedly began dating in July 2020.

In fact, there are reports that they even spent their time during the lockdown together as Draya posted a number of stories hinting at a new man in her life. Though she didn’t reveal his face then, there are assumptions that it could be Taylor. Draya further fueled the rumor by posting some photos from an invite-only party at her place, which was also attended by Taylor.

And as expected, the rumors of Draya and Taylor dating have turned out to be true. So far, the duo has been spotted a number of times together going out on dates. Back in December 2020, the TV personality and Los Angeles quarterback were spotted together enjoying their date night in Newport Beach.

Not only this but they were also spotted in West Hollywood enjoying their night together. While Michele wore a sizzling red cord, her boyfriend Tyrod looked dapper in a black jacket and trousers.

The new couple seems to be enjoying their relationship and we wish them years of togetherness.

Are Draya and Tyrod Still Dating In 2022?

It looks like the couple is still dating. Back on January 23, Draya shared a photo of her boyfriend on Instagram as he celebrated his 37th birthday.

Similarly, in March of 2022, Draya shared a post on her Instagram congratulating her boyfriend for his $17 million deal with the Giants. In her Insta post, she wrote,

Congrats TYTY,” Michele [née Andraya Michele Howard] wrote over a photo of the couple posted on her Instagram Story, along with a red heart emoji.

This definitely proves that the couple are still together and hopefully their relationship continues in the days to come.

Who Is Draya Michele’s Husband? Is She Ever Married?

No, Draya has never been married. Though she was once engaged to her fiance Orlando Scandrick, their marriage was never realized. In fact, she seems to be pretty much content with her new boyfriend Taylor. Apparently, they are not planning their wedding any time soon.

But considering the fact that she is already 36, it’s likely that she is looking for the qualities she wants in her future husband. Hopefully, we will get to see her as a beautiful wife soon in the future.

Like we said earlier, Michele has been in a few unsuccessful relationships in the past as well. In fact, she was even already engaged to be married to Football cornerback Orlando Scandrick. The two had an on-again and off-again relationship between 2014 to 2019.

As per the reports by CheatSheet, Draya met her ex-fiance Orlando in 2014 and soon began dating. Just a year later, in 2015, the football cornerback proposed to her with a $400,000 engagement ring during a movie date. Talking about the proposal to People, she said,

“He got down on one knee and as soon as he started to talk I got nervous and couldn’t help but to laugh hysterically. I was laughing and crying at the same time.”

Eventually, in January 2016, the social media star announced her pregnancy with Scandrick. In an Instagram post, she wrote,

“We are preparing for a Taurus baby,” the former Basketball Wives star, who has over 4.8 million followers on Instagram, said. “He’ll be the first Taurus in our family of four Aquarius and one Capricorn (almost Aquarius)!”

They welcomed their son Jru Scandrick in 2016 and he is 6 years of age in 2022. Unfortunately, the couple could not continue their relationship for very long. Though they had multiple splits through their relationship, they said a final goodbye in 2019 via an Instagram post. She wrote,

“I have been single the entire month of December. So, if anyone has anything to say about me or the guy I used to be engaged to, save, it. We don’t care.”

Who Is The Father Of Draya’s First Child Kniko Howard?

In case you didn’t know, Michele Gave birth to her first child Kniko Howard when she was merely 17 years of age. Eventually, with all the fame, the question about Kniko Howard’s father became a major controversy. In fact, several men including basketball player, Gilbert Arenas, who she dated at the time, were rumored to be her son’s father.

Further, there were also claims that Gilbert paid $20,000 to tabloids to shut down the news. It didn’t stop there and the former Basketball Wives star, Jennifer Williams too alleged him of being the father of Kniko. She even stated she had seen a mail that stated Gilbert as the kid’s father.

All the claims and rumors were debunked after Draya Michele opened up about the biological father of Kniko. The actress and model stated that she was merely 17 when a man impregnated her and that he was later incarcerated for 10 years when she was just 7 months pregnant.

“Here is Darya….. At 17 years old I got pregnant by a man who became incarcerated for 10 when I was 7 months pregnant. With help from my mom, I was able to survive”

Further, she also spoke in favor of the alleged father Orlando saying she was not at all in a position to have an affair with a successful athlete like Orlando. She also said that she would not work in clubs if she had the status to date him.

Now, judging by how under-developed and young I was, besides living in a very small city in PA….. There’s no way in 2002 I got pregnant by some athlete. If I had, there’s not a chance in fucking hell I would have wasted 7 years of my life working “in the club” because clearly child support would be on fleek. I have never received A DIME of child support in my life and that’s ok.

Other Romantic Relationship Of Draya Michele

Apart from all these, Draya has been in a few other rumored relationships in the past. She allegedly dated American football wide receiver, Corey Coleman. None of them ever confirmed the rumors. The rumors began after they were seen having dinner together.

Further, she also had a short-term relationship with American singer Chris Brown. They dated for around 9 months in 2011.,